That sealed a treble on the day for the champion jockey and handed trainer John Moore a sixth win in the annual Hong Kong leg of the Interport challenge.

“There’s a mile race in early June, the (G3) Lion Rock Trophy Handicap, and another option for him at the end of June (G3 Premier Cup [1400m]). He’d be competitive again because he’s holding his form well. He’s not over-raced this season so there is plenty left in the tank,” Moore said.

“He’s come out today and done what I wanted him to do and he came close to the track record so, yes, couldn't be happier.” 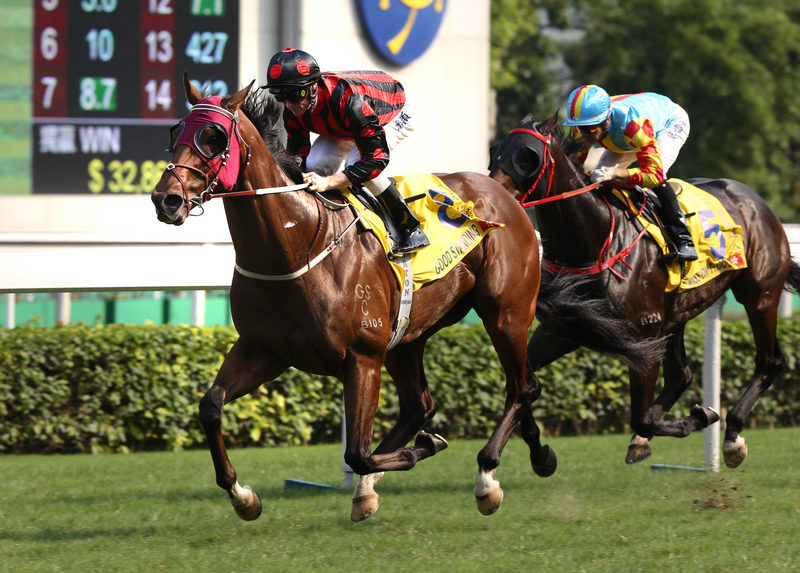 Good Standing broke sharply form stall five and led the field until stablemate Encouraging rushed on by after 300m. Purton settled fourth, stalking Mission Tycoon in a “one-off” spot, and when that rival kicked to the lead, the champion jockey remained still, allowing his mount to roll in rhythmic pursuit.

Purton finally shook the reins when Good Standing drew upsides the Hong Kong Classic Cup hero at the 200m mark. The classy bay drew away for an easy two and a quarter-length score.

“This race set up well for him,” Purton said. “He didn't have a lot of weight on his back, drew a nice gate and had a nice run; he was just able to suck into it and go bang late. It was ideal for him.”

Owner Martin Siu purchased the Artie Schiller gelding as a 2018 BMW Hong Kong Derby prospect but a series of issues put paid to those dreams. It has taken plenty of patience and skill for Moore to get his charge back on the up this term.

“John has done a great job with him,” Purton said. “He’s had a number of issues for a while now. This season John has been able to present him as well as he can and he’s been racing very consistently.”

Moore was confident ahead of the 2.4 favourite’s success as he launches a challenge for the trainer’s premiership. The handler ended the day equal second with Frankie Lor, seven behind defending champion John Size.

“Good Standing came into the race so well in himself, he looked a picture in the paddock and he had trained so well. Even on the soft track the other day, which wasn't that suitable, he still ran a big race. He’s got the form around Waikuku and the other horse (Champion’s Way) that beat him, that's good form, that’s Group 1 form and he’s only just been beaten a few times by some very good horses.

“We did have setbacks right from the beginning, but we righted the ship, we got it right and pulled it off today,” he added. “I didn't want to go over ground and risk another bleed, so that’s why we’ve stuck to the 1400 and mile.”

Purton opened his afternoon’s account on the Dennis Yip-trained Glenealy Generals in the Class 4 Macau-Taipa Bridge Handicap (1200m). That was race four on the card and he followed up in the next, section one of the Class 4 Friendship Bridge Handicap, on the Manfred Man-trained Ultimate Glory.