There were super features at both Busan and Seoul this past weekend as both tracks hosted their respective Owners’ Association Cups. At Busan there was a shock with Meni Hero leading home the field, while at Seoul a new star was born as Raon The Fighter dominated an elite set of sprinters.

The Busan Owners’ Cup on Sunday saw a quality field meet the starter over a mile, headed by Blue Chipper, along with Tiz Plan and Doctor Carson then a mix of young talented horse stepping into the higher levels Including Yeongung Louis a close 3rd in the SBS Sports Sprint to Eoma Eoma at level weights, as well and the unbeaten Success Macho.

They would all be beaten. The start was even other than Yeongung Louis veering out slightly and it would be Black Musk who led from Blue Chipper and the ever-reliable King of Glory.

Black Musk’s challenge would falter in the home straight while Blue Chipper would maintain his charge but drifted wide. Tiz Plan made his way forward but closing the best was 20/1 chance Meni Hero, who struck the front just over a furlong from home under jockey Ham Wan-sik, and ran on to win by just under two-lengths from a resurgent Tiz Plan. Wang Beotkkot closed strongly for an unlikely 3rd while Blue Chipper was an always game 4th. 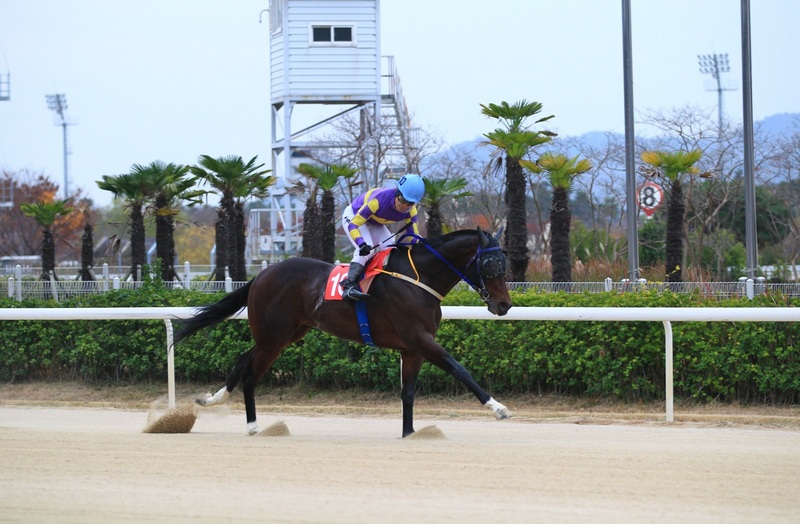 It was a quantum rise in results for Meni Hero, whose only previous class 1 success had come two starts back over 1400M. By the great stallion Menifee, he is out of Pocketful Of Money (by Running Stag), who was a long time holder of the 1800M track record at Seoul Racecourse. Only four-years-old, there could be plenty to come. Tiz Plan showed he is still a force to be reckoned with in 2nd while Wang Beotkkot was a revelation in 3rd. As for Blue Chipper, he briefly hit the front with 300M remaining and while he couldn’t hold on, showed he still can’t be dismissed in any company.

A day earlier at Seoul Racecourse, an elite field lined up for the SROA Trophy at 1200M, headed by Eoma Eoma, winner of the SBS Sports Sprint and of ten races from twelve starts in total and East Jet, winner of nine races including last year’s edition of this race. The 2020 SBS Sports Sprint winner Morfhis was present, as was the unbeaten three-year-old Raon The Fighter, a winner of seven from seven up to Class 2 level in very fast times.

Eoma Eoma was sent off as the odds-on favourite but after an even start, Raon The Fighter quickly headed the field ahead of East Jet and with the favourite caught wide. It stayed that way until the home straight which Raon The Fighter entered a length clear. And then he just kept going.

Eoma Eoma put in a huge effort to find the fence and to grind out 2nd place from the fast-finishing Morfhis with East Jet in 4th. But they were running a different race to Raon The Fighter, whose jockey Park Tae-jong was afforded the luxury of being able to ease his mount in the closing stages having taken a long leisurely look back over his shoulder. The margin of victory was six-lengths on the line in a time barely outside the track record.

It was a statement performance that has turned the existing order on its head. Eoma Eoma didn’t get the greatest of trips but even so, there are few similar races in history in Korea that his performance would not have won. While Raon The Fighter entered unbeaten, there is always the question in such circumstances of whether they will match up in truly elite company. The answer was an emphatic “yes”. Where Raon The Fighter goes next, or even what distance he tackles, as he has won up to 1800M already, is the hottest topic in Seoul right now.

Raon The Fighter is a three-year-old colt by Bayern and out of Clarinda (by Empire Maker). He was imported in-utero which meant that although he is officially classed as Korean-bred, he was ineligible for the three-year-old Classics this year. There is no limit on what races he can take part in from now on though, and it would seem there is no limit in his potential.