Kerrin McEvoy expects his coming riding stint in the UK to be extended after his historic Group 1 double at Eagle Farm on Saturday.

McEvoy flies out for the UK this week, thankfully later than first planned after a delay in the processing of his visa application.

The delay enabled him to ride at Eagle Farm on Saturday where he won the G1 Stradbroke Handicap and G1 JJ Atkins Plate, victories that made him the first jockey in Australian racing history to win more than $25 million prizemoney in one season.

McEvoy’s stellar season has included seven G1 victories this season including the world’s richest turf race The Everest for the second successive time on Redzel, a third Melbourne Cup win for Godolphin’s UK-based trainer Charlie Appleby on Cross Counter and the Magic Millions Classic for Godolphin’s Australian stable on Exhilarates.

McEvoy is flying to the UK for rides at next week’s five-day Royal Ascot gala but may be riding in the UK through to July due to the unavailability of regular Godolphin jockey William Buick.

Buick, who rides the bulk of the Godolphin horses trained by Appleby, has been sidelined indefinitely due to head injuries suffered in a fall.

“I could stay in the UK and ride for two to three weeks after Royal Ascot,” McEvoy said.

“It is up in the air at the moment but I could be there for a couple of weeks.”

McEvoy has won 92 races this season – including one in Singapore -  with 180 minor placings from 667 rides.*

McEvoy, 38, is approaching 2000 winners since his career began in the 1990s including 75 Group One wins worldwide.

He has won 10 G1 races in the UK and Europe, the bulk during his extended stint as stable jockey for Godolphin between 2004 and 2007 that followed his first Melbourne Cup win on Brew in 2000.

* Racing and Sports Data Base 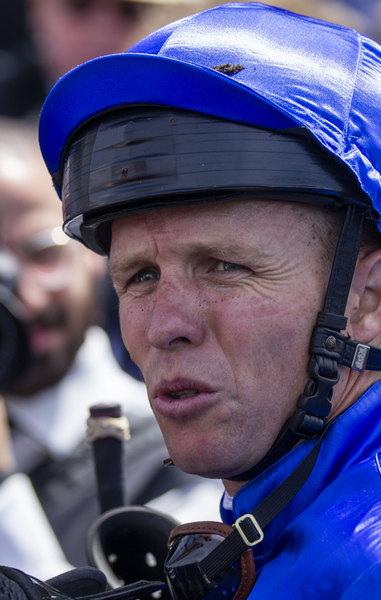