Apprentice jockey Rohan Mudhoo proved to be the star of the show at Riccarton on Saturday when he produced a winning treble of rides on the first day of racing in the South Island following the easing of Covid-19 pandemic restrictions.

The Mauritian-born twenty-one-year-old is in the second full season of his apprenticeship with Riccarton trainer Mike McCann after following his older brother Krishna to New Zealand to launch his riding career.

Saturday’s treble aboard stable runners Gee Tee Eleanor, Frankie The Fox and the Ellis Winsloe-trained Irish Excuse took him to the fifty-win mark for his career to date, with Mudhoo delighted with the day’s outcome.

“That is the first time that I have ridden three winners in a row so it was a great thrill,” Mudhoo said.

“I was pretty calm going into the day and my boss had told me just to take things how they come and give the horses the best possible chance I could.

“When the track got wetter during the day, I was pretty hopeful as both of our stable horses had been working well and handling that type of ground well at home.

“Irish Excuse was just amazing and it was a magic effort.

“I was walking about 50.5kgs so I had to put over 10kgs of lead in my saddle to get to the weight he had to carry.

“He just didn’t want to give up in the straight, he just kept trying and trying and he got there in the end.” 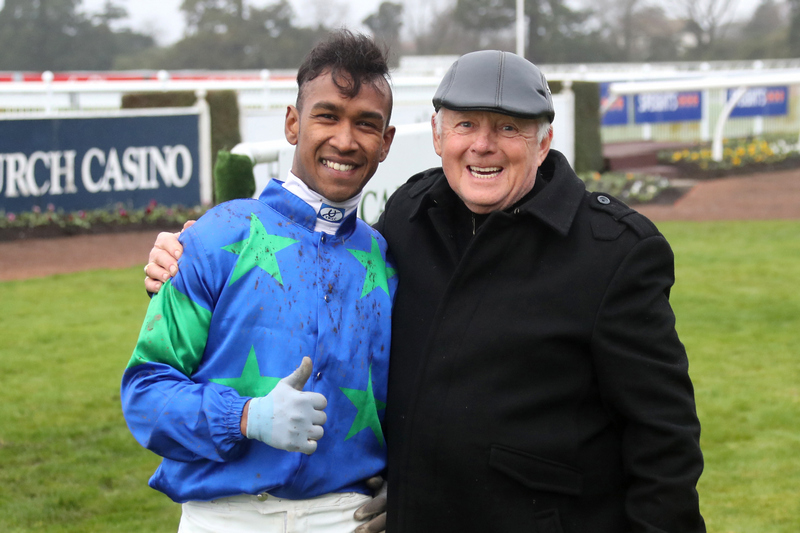 From a non-racing background Mudhoo admits he was like any typical younger brother, keen to follow in the footsteps of his older sibling Krishna when he started out on his path to becoming a jockey.

“In my family the only person who is involved in racing is my older brother,” he said.

“When he was riding back home, he went to the South African Jockey Academy and then got the opportunity to come to New Zealand.

“I thought I’d follow him as I had been following him since I was a kid, the usual younger brother thing where whatever he was doing, I wanted to be doing the same.

“I wanted to act like him and I’d jump on the bed and pretend I was riding like him.

“I rang him here in New Zealand and he eventually managed to get me a job here.”

While Mudhoo looked up to his brother, Krishna made sure his younger sibling found out just what hard work was required to make it as a jockey.
“He (Krishna) has taught me a lot in so many ways but I can say he has never been nice to me on a racetrack,” Mudhoo said.

“He was always telling me what I had done wrong, picked on my mistakes and made me learn very quickly.

“That has been good for my riding and I do appreciate it as it has taught me to figure out what I need to do in different circumstances.

“I know he loves me but he can be a grumpy so and so when we are out on the track together.”

Mudhoo is keen to develop his riding further and plans to take every opportunity available to him as he looks forward to the next twelve months in the saddle.

“I want to keep improving and ride more winners,” he said.

“I’ve ridden three in a day and now I want to win four. I want to keep working hard and give my horses the best chance that I can.

“I’m doing what I really want to do and I’m living my dream with race riding so I feel like I am blessed.”