Last year's Derby hero Masar is in perfect order according to trainer Charlie Appleby, who expects the colt to be tough to beat in the Princess of Wales's Stakes on the opening day of Newmarket's July meeting on Thursday. 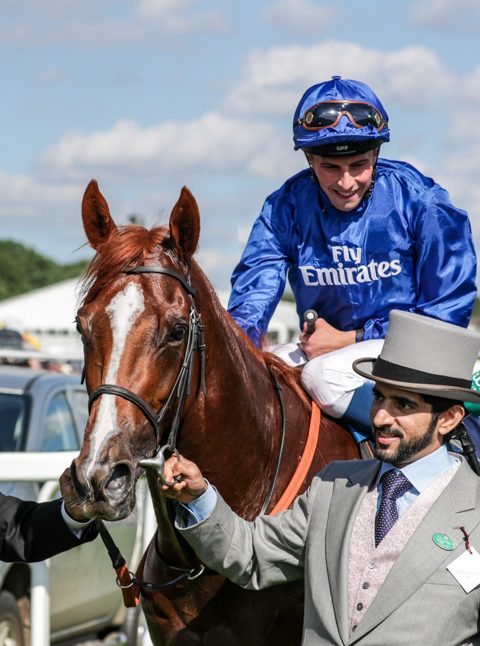 Masar made his belated return from injury when finishing fifth in the Hardwicke Stakes at Royal Ascot last month despite nearly unseating James Doyle after stumbling out of the stalls, and has impressed in his homework since.

Appleby said: "Masar has enjoyed a faultless preparation since his run in the Hardwicke. We are confident that he is in as good a condition as we have ever had him and is the one they have to beat on Thursday.

"The Hardwicke didn’t pan out as we would have liked, he had that hiccup at the start, then they went steady and he was a bit free and had to come wide around the field. But he showed that his enthusiasm for the game is still there, had a nice blow afterwards and has come forward both physically and mentally since then.

"We were pleased with the way that he prepped going into that run, but running first up over a mile and a half at that kind of level was a big ask and there is nothing better than getting a race under your belt."

Royal Ascot winners Baghdad and Dashing Willoughby are among the six-runner field at Newmarket, while Masar will renew rivalry with Mirage Dancer, who finished third in the Hardwicke. Communique and Desert Encounter complete the field.

Appleby has been delighted with how Masar has worked since his comeback and is hopeful the colt can provide Godolphin with a third successive victory in the Group 2, following wins for Hawkbill and Best Solution.

He added: "The improvement that we hope we have seen since then means that we are confident that he can make up the three lengths on Mirage Dancer, provided Sir Michael’s horse hasn’t improved by another three lengths in the meantime!

"Comparing generations is always difficult but, while Hawkbill was a multiple Group 1 winner, Masar is a Derby winner. I would like to think that he has a bit more class than Hawkbill."

There have been eight declarations for the July Stakes, including the Aidan O'Brien-trained King Neptune and Royal Lytham. Frankie Dettori won the juvenile Group 2 last year on Advertise and partners impressive course-and-distance winner Visinari for Mark Johnston this time around.

Windsor Castle runner-up Platinum Star and Coventry third Guildsman also feature in a what looks to be a competitive 6f event.

The Bahrain Trophy opens the three-day meeting and has attracted nine runners, including the Michael Bell-trained Eagles By Day, who finished third in the King Edward VII Stakes behind Japan at Royal Ascot.

Queen's Vase runner-up Barbados will represent O'Brien, with Nayef Road and Spanish Mission other leading contenders for the Group 3 contest.