London Express back to winning form at Matamata

Talented winter galloper London Express bounced back from an unlucky run first-up at Te Rapa last month with a determined effort to score over 1200m at Matamata on Saturday.

The five-year-old Shamexpress mare had been buffeted several times when resuming over the same distance at Te Rapa with trainer Allan Sharrock somewhat disappointed in the ride of his apprentice Hazel Schofer on that occasion.

Sharrock provided Schofer with opportunity to redeem herself on Saturday and she covered herself in glory with a copybook effort despite once again suffering some jostling at a crucial moment in the contest.

Allowed to settle handy after jumping well from an inside barrier, London Express travelled kindly amongst runners before Schofer angled out wide approaching the home bend.

With several rivals improving even further out at the same time London Express was jostled between horses for two or three strides before Schofer extricated herself from the melee and set out after pacemaker Call Me Evie, who was in front with 300m to run.

London Express stretched out gamely to hit the lead short of the post with Midnight Runner and Call Me Evie battling on strongly to fill the minor placings.

“I’m actually prouder of the girl (Schofer) than the horse as she redeemed herself from the time before with a top effort,” Sharrock said.

“She’s not an easy mare to ride as she gets on the chewy and got a bump midrace as well.

“Hazel did well to circumnavigate all that and I think the last 50m was the best part of the race as she really stretched out nicely.

“I’m proud of both horse and rider.”

Sharrock will now look for some bigger targets with the mare who won the Listed Castletown Stakes (1200m) as a two-year-old.

“She’s got a great record at 1200m even though I think she can get further,” he said.

“There’s a stakes race (Gr.3, 1400m) at New Plymouth coming up in September which she may get away with on her home track so we might look for an open sprint to lead into that.

“I might even throw a nomination in for the first Group One at Hastings (Tarzino Trophy, 1400m) because, if she got a heavy track there and it all went skew whiff for the good ones, she might lob a place.

“I think that race at home does look like a good one for her though so that’s my first thought at this stage.” 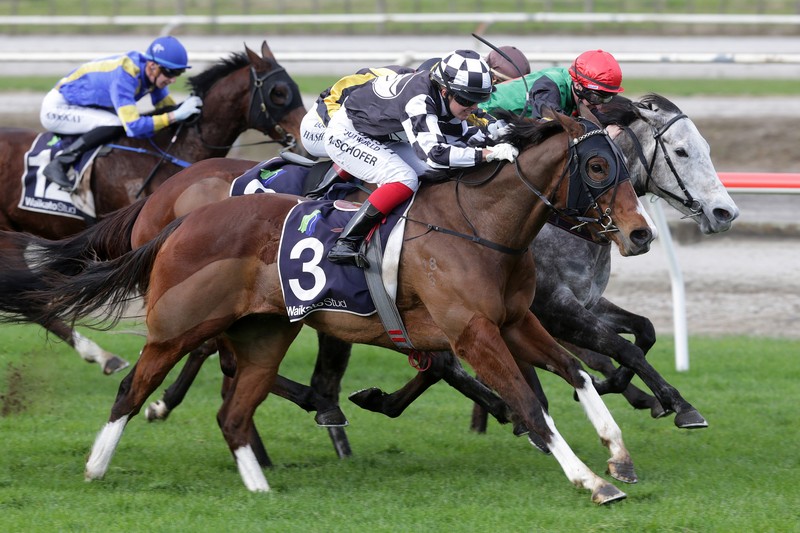 Kim Coxon couldn’t have scripted a better end to her current time as a licensed trainer when Tammie Wynette provided her with the perfect farewell at Matamata on Saturday.

Coxon has handed in her trainer’s license as she prepares to move to the Te Puke region with fiancée James Taylor, where the pair will run a combined dry-stock and kiwifruit operation.

Coxon has been training a small team in her own right at Matamata since her father Richard passed away after a battle with cancer five years ago. Included in that team is six-year-old mare Tammie Wynette who had indicated with a last start run for third that she was ready to strike winning form at short notice.

Raced by Coxon and her uncle Wayne, who purchased the mare from Grangewilliam Stud for just $1400 at the 2016 Festival Sale at Karaka, Tammie Wynette put her best foot forward as she staved off all challengers in the run home to score by just on a length in the rating 72, 1400m contest.

“It was my last runner today and it turned out absolutely perfectly,” Coxon said.

“I was pretty confident as she had won third-up at her last two campaigns and she was third-up today.

“She had improved in her gallops since her last run so I thought she would be hard to beat. She handles her racing really well so I think there is more in store for her.

“The day was made even better as Matamata Veterinary Services sponsored the race and I do work for them so things couldn’t have turned out any better.”

Tammie Wynette will now transfer into the care of Mark Brosnan and while Coxon won’t be training horses in the foreseeable future, she will still have plenty of equine company around her at the new venture.

“I’ll be taking three horses with me, one is a stock horse, one is a thoroughbred mare and one is a little weanling half warmblood, half thoroughbred that I hope to showjump one day,” she said.

“It’s a little sad to not be training but I’ve got some big opportunities in front of me now.

“I’d never say never again to training a few but for now I’m concentrating on the exciting things we have to come.”