Logan hoping for some Good Luck with Hakim

Trainer Donna Logan hopes that taking some weight off the back of Good Luck Charm and Gamely would put them in good stead for their races at Kranji on Saturday.

Good Luck Charm is handicapped at 52kgs as he is up in grade in the $50,000 Class 4 Division 1 race over 1000m while Gamely was allotted 55kgs in another race of similar class and distance.

Both Thai-owned Falcon Racing runners look well-in on the weights, but their New Zealand handler would not mind shaving a further three kilos off each of them, more so when the rider she is using is regarded as one of the promising young guns at Kranji. 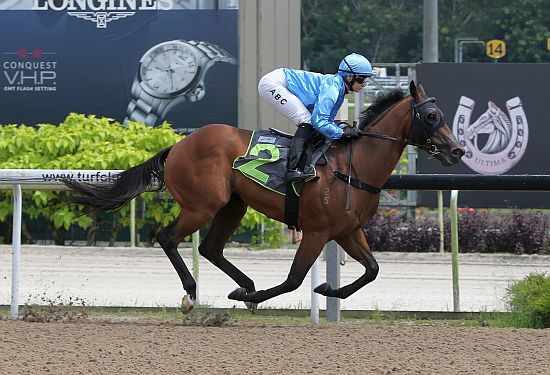 “I’ve booked Hakim (Kamaruddin) for both rides,” said Logan who sends out a team of 11 runners for this Saturday's meeting.

“He’s a very talented young rider, and he can claim, so that would give both horses better chances.”

The 22-year-old first-season apprentice from Malaysia currently boasts the highest strike rate (13.39%) among the local apprentice jockeys, and is ranked second (17 wins) on the premiership table, with six wins less than the leader Simon Kok Wei Hoong.

He rode mostly for his master Mark Walker since plying his trade at Kranji this year, but his polish in the saddle caught a few other trainers and Logan’s attention. She has given him 10 rides since August 2.

Though Hakim has yet to score for her, he came close with two seconds aboard Good Luck Charm at his second and third last start, both in Class 5 races. The five-year-old son of The Factor then went on to beat his rivals in a similar race under Brazilian jockey Ruan Maia on September 26.

He also rode Gamely, a five-year-old by Golden Archer, once to finish fourth behind The August on August 8.

Hakim was recently cleared from an irregularity detected in his urine sample - found to have originated from a cough mixture - to resume trackwork and ride in races from last Saturday.

“Good Luck Charm won a strong race last time. It’s always tougher for horses up in class, but he’s a horse that always goes well fresh, and his work has been good,” said Logan of her last winner on September 26.

“I’m very happy with him physically. And obviously, an inside barrier this time would be vital too.

“Gamely was out wide last time (10th behind Heavenly Dancer on September 12), and it’s been a while between races for him, but I’ve put Hakim on to claim as well, so I’m sure he will strip fitter this time.”

Given that there are two suitable races in Class 4 over the 1000m on Polytrack this Saturday, Logan gladly grabbed the opportunity with both hands.

“Yes of course, it’s a chance to win more prizemoney for the owners with them in separate races,” said Logan, who also has Super Posh in the same race as Gamely.

“Now, there’s only one race meeting a week, so you can’t really get all your horses running in the races.

“(COVID-19) has thrown plans out of the window, but we just have to do our very best.”