While yet to win at Group level in nine starts thus far and up against multiple Group 1 winners on Saturday, Lim’s Kosciuszko is the overwhelming pundits’ pick to win the $1 million Kranji Mile.

The Australian-bred four-year-old had his colours lowered for the first time at his most recent outing, but that has not stopped the likes of Scott Bailey and Pat Comerford from the Singapore Turf Club’s English Broadcast team, making Lim’s Kosciuszko the one to beat.

Comerford – behind the binoculars for the first time at Group 1 level at the big race this Saturday – said ‘time’ is on Lim’s Kosciuszko’s side. 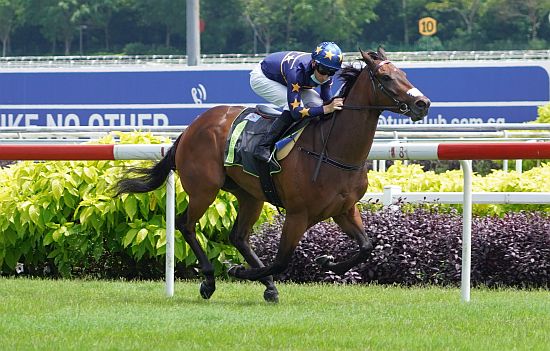 Lim's Kosciuszko looks the one to beat in the Group 1 Kranji Mile on Saturday, picture Singapore Turf Club

“I kept going back to the time (1min 34.07 secs) he ran over the mile two starts ago,” said the Australian race caller.

“Nothing has really come close to that on paper- maybe Lim’s Lightning – but I think Lim’s Kosciuszko’s star is on the rise.

For value, Comerford thought the Shane Baertschiger-trained King’s Command could give punters something to cheer about.

“King’s Command also comes into this with a good time under his belt as he carried weight from his last-start win in Kranji Stakes B company,” said Comerford.

“That will hold him in good stead in this field, although he has to give weight to the other good horses at the weight-for-age scale.

“I also thought his run in the (Singapore) Gold Cup was impressive given he was giving the winner 20 lengths at the top of the straight, so you know he will be strong late.”

Bailey agreed with his co-host on both horses.

“I think Lim’s Kosciuszko will get the run of the race from his barrier,” said the former assistant-trainer to Baertschiger.

“He can sit outside the leader if Dan (Beasley) wants him to, has the best turn of foot in the race and at the weights, he should win.”

Bailey suggested the Stephen Gray-trained Hard Too Think was the danger but was with Comerford about his best value chance.

“Hard Too Think’s barrier is a big concern although you know he will be very strong late,” said Bailey.

“But King’s Command seems to be improving at the right time and he can certainly figure.”

Likewise, TrackTalk media tipsters Suresh Ragavan and Michael Spark have the Daniel Meagher-trained star on top with Ragavan agreeing with Comerford about time being the biggest factor.

“He clocked the best time of any horse in the race over the distance, he has shown he can carry weight, he has a good gate and I think he is the best horse in Singapore,” explained the popular Malaysian pundit.

“Of the others, I think Mr Malek can run a good race at odds.

“He finished well last start, puts the blinkers on and he could surprise punters with Bernardo Pinheiro in the pilot’s seat”.

Spark, the astute Australian analyst, made it a clean sweep with Lim’s Kosciuszko.

“He did all the work last start, so he had every excuse to find one better late,” said Spark.

“He also meets the majority of that field better at the weights, gets Beasley back on and he should get the gun run from the good gate.”

Spark thought Minister – who won the Kranji Mile last year - is the one to watch at odds.

“He was a real eye-catcher last start when attacking the line,” he said.

“From the good gate, he will get a gun run too, just off the pace, and with any luck, he will be in the finish.”

And what do I think?

Who am I to argue with the Singapore experts?

Lim’s Kosciuszko should win, with Lim’s Lightning the danger and I agree with Michael, in that the Donna Logan-trained Minister will be doing the best work of them all at odds.