Daniel Meagher gave another proof of his reputation as a patient trainer after Lim’s Dashing scored first-up from a 10-month spell on Friday night at Kranji.

Just last week, he saw his dint of hard work reap rewards with the injury-plagued and former top stayer Lim’s Samurai winning his first race under his polish, and at mammoth odds.

Adding even more merit to Friday’s feat was the fact that Lim’s Dashing is a rising eight by Darci Brahma and was a stable transfer who didn’t come without some niggles - not facts and figures which usually spell instant success in racing. 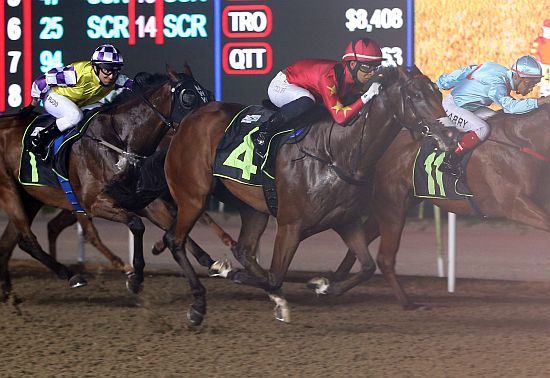 But the Australian trainer nursed Lim’s Dashing back to full fitness from a chip operation. Besides getting some low-down from his previous handy record of three wins and 10 placings from 25 starts, he also derived plenty of insight from the way he put his chip issues behind, and had since made headway on the training tracks.

“That was his first run for us. When he came to us from Stephen (Gray), he had some chips in the joint and we had to operate on him,” said Meagher, who also owns him.

“We brought him back and he then had three trials for us. (Assistant-trainer) Danny (Beasley) rode him in all his trials and after his last, he gave me the confidence he would run well.

“We planned for that race for a long time. It was a well sought-out plan and it’s fantastic he’s won first-up.

“Again, a big thank you to all the team. It was a great team effort.”

Ridden by three-kilo claimer Yusoff Fadzli, Lim’s Dashing ($32) settled in midfield and looked an ominous threat as he started to take closer order upon straightening.

Sacred Don (Michael Rodd) drew first blood when he collared leader First Choice (Marc Lerner), while late drifter Hotshots Slam (A’Isisuhairi Kasim) was snooping up from behind, but they were left standing when Yusoff unleashed Lim’s Dashing down the middle of the track.

The winning margin was one length with Hotshots Slam holding off Sacred Don by the same margin in third place. The winning time was 1min 5.25secs for the 1100m on the Polytrack.

The concluding stages of that race were unfortunately marred by Ruan Maia getting unseated from the well-backed Golden Dash after the latter ducked sharply to the inside without warning. Luckily, Maia was rather quick to get back on his feet but had to be stood down from his remaining engagements when he was diagnosed with a sprained neck.

Yusoff, who recently transferred his indentures from Saimee Jumaat to Donna Logan, has since hit a purple patch of form with three winners, all coming for Meagher, in the space of two weeks. The Malaysian won aboard Lim’s Knight for his 2020 opener on March 13 and one week later he doubled up with Red Claw.

“A big thank you to Mr Meagher for supporting me. I rode three winners this year, and all three are for him,” said Yusoff.

“I just let this one travel where he was comfortable. I had a lot on hand, and when I asked him to quicken, he gave me a good response.

“At the top of the straight, I pulled him to the outside. I just tried my best, and he won a nice race.”

With that fourth success, Lim’s Dashing has now collected around $260,000 in stakes earnings, with the bulk coming for his previous owner, the Lim’s Stable.

Meagher showed his gratitude to his biggest supporter by returning the favour with a winner of their own two races later.

Lim’s Torpedo ($28) with A’Isisuhairi Kasim – the same jockey who drove Lim’s Samurai to that blowout win last Friday – up, took the shortcuts home in the $20,000 Maiden race over 1200m.