Lim has Songgong back on song after colic

A mild bout of colic was the reason behind Songgong Hera’s withdrawal two weeks ago, but trainer Jason Lim’s useful sprinter has luckily recovered and will look to bounce back this Saturday at Kranji in the $70,000 Class 3 race over 1100m.

After posting an impressive victory in similar company at his last start on August 1, but over 1200m on turf, the former New South Wales two-time winner (1200m), when known as Warfare, was among the top picks in a Class 3 1000m speed dash four weeks later on August 29, but after he gave it a miss, Watch Out Dad went on to land a surprise win.

To Lim’s and connections’ (Everest Racing Stable) relief, Songgong Hera’s colic, a potentially fatal ailment among horses, did not worsen. The two-time Kranji winner by Spirit Of Boom was soon back to full fitness and quickly resumed work. 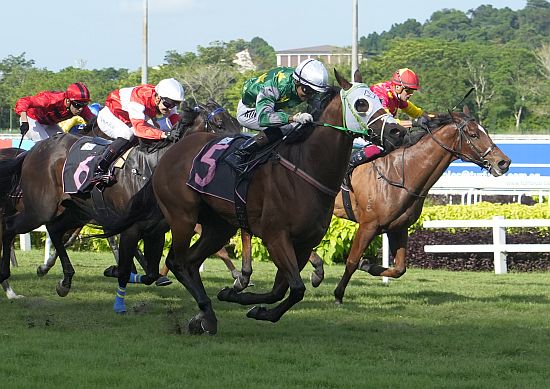 “He had a mild colic in the early part of the week he was supposed to race. That’s why we had to scratch him,” said David Hill’s former assistant-trainer.

“He didn’t work so he could just rest, and luckily, he has fully recovered. He has had two gallops since and I was very happy with them.

“We’re lucky he has picked up quickly and in time for another race he can run in. It’s a good thing he’s a versatile horse who can handle both turf and Polytrack, which gives us a few more options.”

Songgong Hera has drawn barrier one, generally a massive plus in such sprints, but Lim said the five-year-old would still be dictated by the speedmap of the race.

“I’m yet to go through the racecard. I don’t know the speedmap yet,” he said.

“He’s won his last race from off the pace, which is how he raced in Sydney, but he can also lead as he did on his debut here.

“Iskandar (Rosman) will ride him as he’s won on him the last time, and it’s also good to get the three-kilo claim off the 58kgs. He couldn’t ride him at the race he was scratched because he was suspended and Danny (Beasley) who won on him at his debut, would have been his jockey.”

Lim, who took his 2021 score into double digits with Captain Singapore last Saturday, said he was, however, not sure if Songgong Hera would make the grade at the highest level.

“We tested him in a Class 2 race two runs back to see how he measures up. He ran a good third to Makkem Lad,” he said.

“It was a good indicator he can become a good Class 2 horses one day. I’m not thinking too far ahead for him, even if the Merlion Trophy could be an option.”

A different kind of Merlion Trophy is this year staged as the last feature race of the season, on the last raceday itself, November 27. Besides being the only remaining Polytrack feature race following a major overhaul of our racing calendar, it has been downgraded to Group 3 and carries only $110,000 in prizemoney.

Lim has plenty of time for Songgong Hera, but he is loath to put all his eggs in one basket. The Australian-trained handler is going international in his latest recruitment drive, he tested the US market with the likes of Takhi, Perfect Mission and Natureisspeaking before, this time he heads further down South.

“Songgong Hera is probably the best horse in my stable right now,” he said.

“But I have some newcomers who will be racing soon. There is Nordic Gem, who is a four-year-old raced by the same owners as Panfield and Butterfield in Hong Kong.

“He didn’t have a permit for Hong Kong, so they sent this Brazilian-bred (x Courtier) up here. He’s a two-time winner in Brazil and is a miler, and has been in work for a month.

“I also have an Argentinian-bred grey called My Man (x Key Deputy), another four-year-old. He’s won three from six back home and is a sprinter.

“He was getting close to a start but he had a minor setback, which is not serious. We’ll have to wait for a while, but he’s also shown ability.”