Lightsaber to the fore in Guineas Prelude

The old firm of Peter Moody and Luke Nolen have renewed their success at Group level taking out the $300,000, Group 2, Neds Caulfield Guineas Prelude (1400m).

The victory of Lightsaber (by Zoustar) in Saturday’s renewal was their most important since Moody made a return to training in May last year.

Now the pair, along with Lightsaber, will chase a Group 1 victory in three weeks when they team in the Caulfield Guineas (1600m).

Sitting outside the leader Military Expert (by Redoute's Choice), Lightsaber ($4.80) got the upperhand at the 200m-mark before scoring a half-length win from $6.50 chance Brigantine (by Astern), with Military Expert ($7.50) a head away third.

Nolen is hoping for similar success to his previous winning rides in the Prelude when Lightsaber lines up in the Guineas. Prelude winners Wonderful World (2006) and Anacheeva (2010) both went on to win the Guineas with Nolen in the saddle. 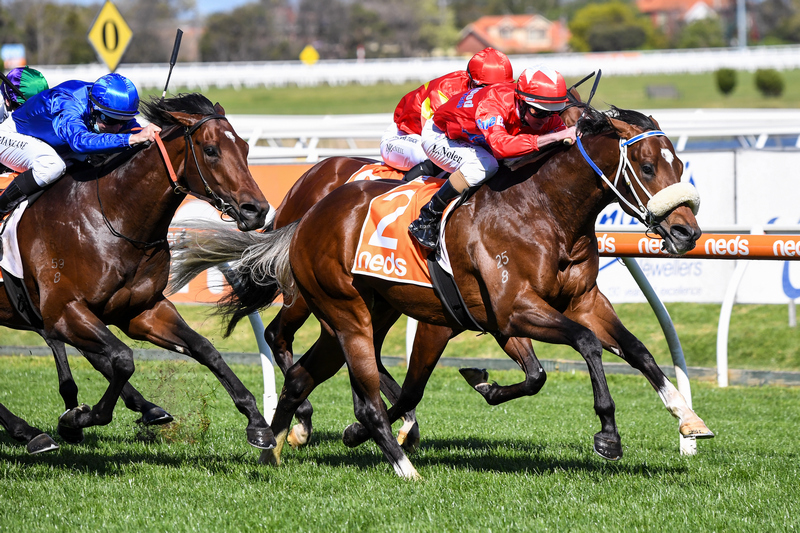 Lightsaber and Luke Nolen with Brigantine and Damien Lane outside, picture Racing Photos

“Hopefully lightning strikes for a third time,” Nolen said. “I think he’s still on the up and I’m really happy we had him screwed down. He had the two runs here — didn’t do a lot in the first run, but I was really happy with the second part of his run here.

“We had a race shape a bit more suited to us today. The really pleasing part of it was that when I asked him to fire away he then came back underneath me, and I rode him on a bit of cotton.

“Going to the mile doesn’t pose any fears for us as he’s on an upward spiral. He’s three weeks away from the final and hopefully it all falls in line for that.”

Assistant trainer Katherine Coleman said Lightsaber was the stable’s No. 1 seed in the Guineas.

“It’s all been a build-up getting him here fitness-wise and he saddled up in really good order,” Coleman said.

“He’ll improve again off today’s run, and we really look forward to being back here in three weeks’ time for the Caulfield Guineas.”

Winning time was 1:25.14 compared to 1:24.88 registered by Bon's A Pearla over the same course and distance in the previous.