Lerner all pumped after Kharisma draws in

After only a handful of placings to show for at his first day back at Kranji last Saturday, Marc Lerner is hoping to quickly get his name back on the scoresheet this week with his book of eight rides, of which Kharisma looks to be on paper his main chance.

The French jockey has partnered Stephen Gray’s handy moneyspinner to two of his nine wins for Indonesian outfit Dago Stable, as well as two thirds.

Their “worst” pairing came at Kharisma’s last start in the Group 3 Merlion Trophy (1200m) when the Mossman five-year-old settled back in a more rearward spot than usual, and looked tapped for toe when clicked up for his run inside the last two furlongs. 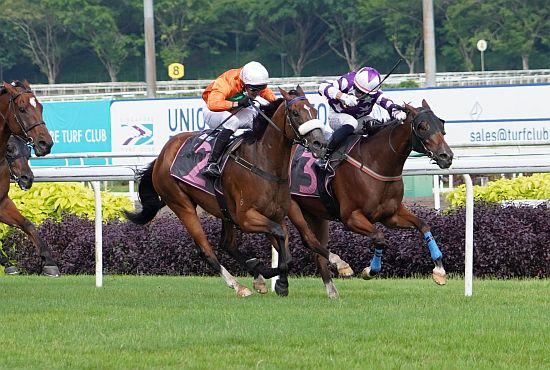 Usually more incisive in his finishes, Kharisma could only plod on for fifth place three lengths off the winner Celavi, but he did actually clock up the second fastest sectionals in 23.72 seconds.

Adamant it was the wide gate that led to his downfall, Lerner couldn’t wait to prove his point this Saturday after Kharisma drew much better in barrier No 3 in the $100,000 Kranji Stakes A race over 1200m.

“Everything in the Merlion Trophy was against us, but I think he still ran a top race,” he said.

“With the wide gate, it was difficult. I’m sure he would have run a much better race with a better barrier.

“I also think he’s a horse who prefers 1400m these days. He was a bit beaten for speed and it was tough to make ground.

“But this Saturday, he has drawn three, and he will be up with the pace. He’s a horse who cannot concede too much ground.”

Lerner said Kharisma gave him a beautiful feel at his last two final gallops, last Thursday’s barrier trial which he actually won after he collared Merlion Trophy nemesis and Saturday’s main threat Celavi (who was not being ridden along by regular partner Louis-Philippe Beuzelin and finished a close fourth) in the straight, and Tuesday’s hitout.

“I didn’t ride him in December during the break as I was back in France, but they told me he’s been working well,” said Lerner.

“His barrier trial was not bad last week. He ran on at his own pace, of his own volition when he went past Celavi, I didn’t push him out.

“I galloped him yesterday, and again, I was very happy with that. He’s in very good form.

“He’s going over turf this time, which is fine as he handles both the turf and Polytrack very well.

“He’s a very consistent horse who won six races last year. He deserves to win a Group race one day, and I hope he begins his 2022 season well.”

Lerner himself didn’t start the year with a bang, but is keen to get some momentum building, especially when three-time Singapore champion jockey Manoel Nunes and Oscar Chavez already have a headstart with four winners on the board, and share the early lead in the premiership.

“I myself couldn’t ride a winner at my first day back, I had a few placings,” said Lerner

“I’ve got a few decent rides this Saturday, and Kharisma is probably my best chance.”

Among his other seven mounts, On Line, All We Know and Silent Partner are probably those with a better chance of putting Lerner back on track.

After arriving from Germany in 2018, Lerner put in his best season last year with a third placing on the Singapore jockeys’ premiership on 46 winners, as well as two Group 1 wins aboard Gray’s other top gun, Hard Too Think, in the Singapore Derby and Queen Elizabeth II Cup.