It’s taken a while for Leggenda to hit his straps and, more to the point, get the lucky breaks he badly needed, but the US-bred finally had all the stars aligned in the $20,000 Maiden race over 1200m at Kranji on Saturday.

Racing for the 11th time at Kranji for our East Malaysian partners and strong supporter of Singapore racing, the Royal Sabah Turf Club, the New Year’s Day four-year-old for once raced without the litany of setbacks that had plagued him at most of his previous 10 starts.

Already behind the eight ball with his tardy getaways, Leggenda was often checked, got trapped deep (never drawn better than seven except for two starts when he drew marble one), and last but not least, could have finally finished in the money only for his jockey (A’Isisuhairi Kasim) to stop riding (and was subsequently banned for two days) two starts back. 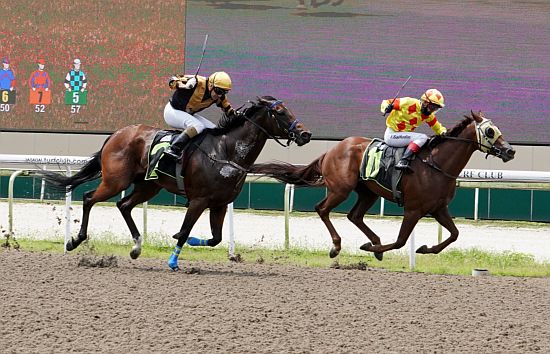 Still, the box seat can be a double-edged sword in short sprints, but with Lady Roxanne (A’Isisuhairi) matching motors with Holy Eleanor for most of the way, the hotpot didn’t have things all her way at the head of affairs.

Whether it was a case of the staggers that made her roll off the rails at the top of the straight is a conjecture Saifudin would not waste his time engaging in. The moment the gap presented, the Malaysian veteran jockey set Leggenda alight for that last task left at hand – reel in Stephen Gray’s Irish-bred mare.

The remaining 150 metres turned into an old school Australian slugfest with Duric and Saifudin going toe-to-toe in their windmill whip-wielding style harking back to the track action of the 80s-90s Down Under, and even in many parts of South-East Asia where Australasian jockeys of that era have ruled the roost.

No disrespect to our four-time Singapore champion jockey Duric, who has already saluted 612 times at Kranji, it’s never a bad thing for competition with Saifudin able to give one to the underdog barrackers, as he got Leggenda over the line with half-a-length to spare from Holy Eleanor.

Superman (Iskandar Rosman) ran third another 2 ½ lengths away. The winning time was just one hundredth of a second off 1min 12secs.

Trainer David Kok said the handy draw went a long way in unlocking Leggenda’s winning flair, especially over a trip which he didn’t think was his forte.

“The good barrier is a big advantage,” said Kok.

“Usually, he comes from the back, but over 1200m, I wanted him to be closer to the speed and it’s worked out well.

Kok was also thankful to the Sabah connections, a long-time supporter of his with the likes of Kinabalu Warrior or Win Win.

“They are very good people, very supportive. They never interfere with my training, they never chase me even if a horse hasn’t run for two months,” said Kok.

“Today, this one just came out and won for them and I’m sure they’ll be happy.

“I got this horse from my US bloodstock agent Melvyn Ezekiel, who every year, gives me a shortlist to pick from. I only looked at his photos and pedigree and I liked him.”

With that maiden win along with minor prizemoney for a fourth, fifth and sixth, Leggenda has now earned more than $13,000 for his East Malaysian connections.