Leatherhead sliced off another 0.19 second to the Polytrack mile record at Kranji recently equalled by Super Dynasty (with Tiger Force) in the Group 3 Colonial Chief Stakes on Saturday.

Winning trainer Ricardo Le Grange was evidently pleased he has a new record holder under his barn roof, not to mention old stager Mighty Emperor’s last-grasp second in the $50,000 Class 4 race also handed the South African a nice quinella, but the celebrations were noticeably subdued despite the memorable feat.

Le Grange learned on Friday that his former mentor Patrick Shaw’s father had passed away in South Africa. 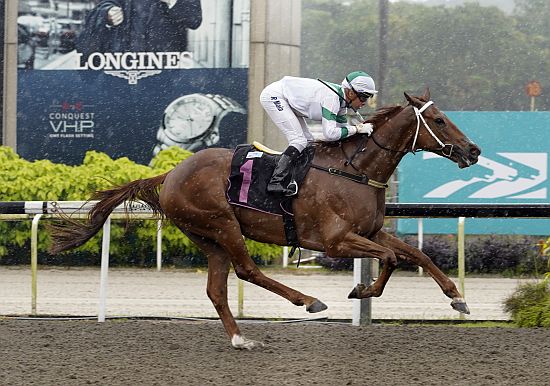 With Le Grange as his right-hand man right through the overseas stint, Shaw trained with great success at Kranji from 2001 to 2016, claiming the Singapore champion trainer title in 2011 and was of course made famous both here and internationally by iconic sprinting star Rocket Man.

“Leatherhead’s record-breaking win was just fantastic, both for me and the owner Rudy Mendoza, who has become a great supporter of mine and Singapore racing,” said Le Grange.

“It’s a well-deserved accolade for both the horse and Rudy, and how not to mention Ruan Maia’s strike rate on Polytrack, which is just outstanding. Good old Mighty Emperor making it a 1-2 for us is such a lovely bonus, too.

“But all this is put in perspective with the sad news that Pat’s dad Bernie passed away in South Africa last night. I knew Bernie very well and I’m still trying to come to terms with the fact he’s not with us anymore – this one’s for you, Bernie.”

Leatherhead ($26) had joint-favourite Asaad (Hakim Kamaruddin) in his sights in a one-out one-back spot from the start, and once he took closer order while approaching the home turn, the issue was soon a foregone conclusion.

With Alexander Horatio (Winston Cheah Wei Wen) on the inside having turned sparring partner to Asaad at the head of affairs, they were soon left as sitting ducks when Leatherhead pounced on them upon straightening.

Given his full head by Maia, the Helmet five-year-old cleared out to an emphatic 2 ¾-length win from his fast-closing stablemate Mighty Emperor (Juan Paul van der Merwe) who just pipped Asaad for the perfect Le Grange result.

That second win from 17 starts has swollen Leatherhead’s account closer to the $100,000 mark for Mendoza.