Supremely-bred Yearning (by Snitzel) came from last on the home turn in the $1 million, Group 1, Schweppes Thousand Guineas (1600m) and passed all of her rivals in the straight for an outstanding victory in the coveted 3-year-old fillies Classic.

A last-start runner-up in the Group 2 Edward Manifold Stakes at Flemington, Yearning reversed the quinella of that contest when relegating Elusive Express (NZ) (by Jakkaleberry) to second in today’s major feature on the Wednesday program at Caulfield, the duo finishing clear of Barb Raider (by Rebel Raider) in third. 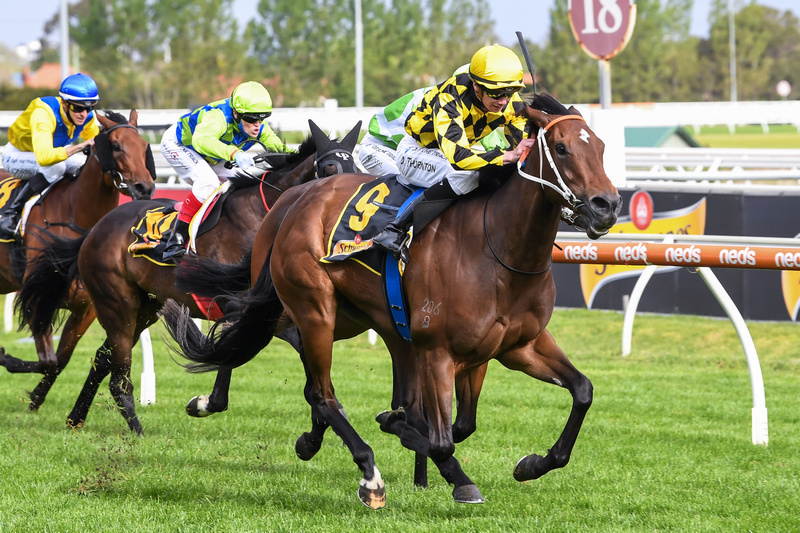 Yearning finishes too well for her rivals in The Thousand Guineas, picture Racing Photos

Speaking on behalf of the winning training combination, Wayne Hawkes was still coming to grips with the performance of the 25/1 outsider immediately after her stunning success.

As Hawkes put it: “When you buy these high-class fillies with the big pedigree, the owners put in a lot, a lot of money. The pedigree is already there but, gee whiz … she is [now] worth a lot of money.

“It’s good for those expensive horses to actually win. There’s a lot of owners that buy at the top-end and a lot of the top-end ones don’t actually make the grade, so it’s nice to nail a good one.”

Hawkes was keen to give winning rider Damien Thornton credit for his patient ride.

“It was a good ride. [The favourite] Zouzarella was one of the ones to beat and it was back out there. All of a sudden we jumped well but we were back last. He didn’t panic and, to be fair, a lot of them would have panicked and thought ‘woah here we go’, because he said ‘you really rate this filly’ and I said ‘she’s a good filly and she’s got a great chance — she’s not just a ride’.

“He really bided his time and put Zouzarella back in its pocket at the top of the straight, and the rest is obviously history.”

For his part, Thornton indicated that Wayne Hawkes was partly responsible for his very calm approach.

“Wayne said pre-race ‘don’t care where you are, just get her to travel, find a rhythm, keep her balanced and go from there.’ I just helped her begin as best as I could and then just let her tell me where she wanted to be.

“She traveled really well. Last really and out the back. I was on the back of Zouzarella and it didn’t look like it was going to get through, so I decided to follow Jye [McNeil on Elusive Express] around the field. She took me into the race nicely and then she [Yearning] did the rest from the top of the straight.”

Yearning won by a clear length, with Elusive Express (NZ) finishing a length and three-quarters ahead of third placegetter Barb Raider.

Winning time was 1:37.54, compared to 1:35.00 recorded by Anamoe in the Caulfield Guineas last Saturday on a lightning fast track.