The Lion City Cup was meant to be Grand Koonta’s grand final, but after the classy grey sprinter could only run third, connections weren’t sure what next.

The $1 million Group 1 Kranji Mile (1600m) two weeks after the Group 1 1200m sprint on May 22 would be an option they would normally pass without giving a second glance, but given his lofty ratings of 103, and with not many level-weight sprints in sight, it was Hobson’s choice.

The six-time winner (all 1200m) stepped out for a barrier trial on Tuesday, more as an exercise to keep the Dark Angel six-year-old ticking over towards his new Group 1 assignment. 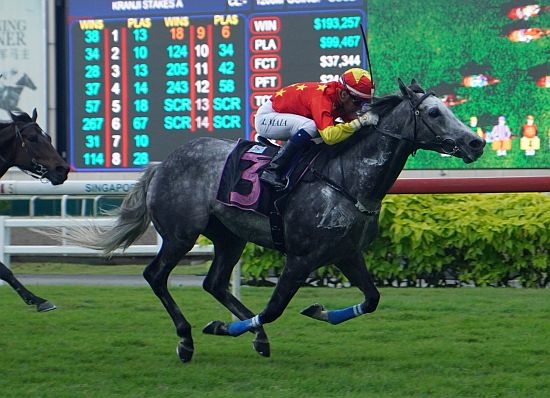 China Horse Club’s current flagship horse in Singapore is probably one of the best horses at Kranji to still not have a ‘black listed’ race to his name.

Box-seating behind Sun Marshal, Grand Koonta was steered for an inside run in the home straight, sticking on for sixth place around four-and-a-half lengths off the winner Rocket Star.

“The main target was the Lion City Cup, he ran well there, but with his ratings, there are very limited opportunities for him after that,” said trainer James Peters.

While Singapore champion jockey Vlad Duric teamed up with Grand Koonta for the first time in the Lion City Cup, it was always understood it would be a one-off ride, given his commitment to Singapore Derby winner Top Knight, whom he incidentally rode to second-last place in that Tuesday barrier trial.

A possible pointer was Peters’ booking of Marc Lerner for the barrier trial, but the French jockey also has to honour a long-term engagement on Mark Walker’s Mr Clint.

“We sort of knew we could be left without a jockey as we only planned to run him late,” said the English conditioner.

“All the top jockeys are already booked. At this point in time, I don’t have a jockey, we’ll see what happens in the coming days before casting anything in concrete.”

Meanwhile, Peters will be looking at his team of seven runners this Saturday to nip in the bud the mini run of outs that has been building up since Asgard Massif on April 24.

From the small squad, Dr Kardo in the $20,000 Open Maiden (1100m) is regarded as his best bullet on the back of his smart debut second in a similar Maiden race, but over 1000m a fortnight ago.

The Not A Single Doubt four-year-old sports the pink and white jersey made famous by the Barree Stable’s Debt Collector and Inferno, an obvious clue which trainer he changed hands from.

“Cliff (Brown who left Kranji in March after 14 successful years) had him first. I believe he also has a share in him,” said Peters.

“He’s been trialling pretty good and came with some decent ability from Sydney (where he was trained by its premier trainer Chris Waller). We were hopeful of a good run first-up, but he ran above expectations.

“He had a few issues, he’s not straightforward, but things have run smoothly since. He ran a very encouraging race at his first start and we’ve found a nice race for him again tomorrow.

“Vlad (Duric) will be on him. You can never tell how they will go second-up, but all indicates he should run well again.”

Conversely, Pini Pons has been a lot less becoming at his first three starts since arriving from Argentina, but his first Polytrack test in a mile race on May 1 has reignited hope there could be an engine under the bonnet after all.

“His last run was much more encouraging. I think he wanted a trip over more ground, but we have been running him over 1200m twice and he didn’t show too much,” said Peters.

“He actually trials quite well on Polytrack, better than in his turf races where he was pretty disappointing. So we thought why not get him back to Polytrack, and we were very happy with his last run (Class 5 on Polytrack mile when third to Milimili after showing the way).

“He’s now going for this Maiden race, but it will not be easy with the topweight (59kgs), even with Noh Senari claiming one kilo.”

As is the case for many Argentinian-breds who don’t hail from the more familiar sires in Singapore like Orpen or Pure Prize, little is known about  the three-year-old son’s Argentinian sire Suggestive Boy (x Easing Along) other than he is a winner of the Grade 2 Arcadia Stakes (1600m) at Santa Anita in 2013.

“On the way he works, he never had a great sprint. He’s more of a grinder, so we think the longer the better for him,” said Peters who prefers to go with what he has seen on track than delving too much into the pedigree books.

“Whether he can run up to his last run, it’s hard to say, but let’s hope he can bring up a win for the team as it’s been a lot of seconds of late.”

Since Asgard Massif, besides Dr Kardo just missing out by a short head to Wawasan on May 1, Peters also finished second-best with Cheval Rapide and Endless last Sunday.