Kiwi Ida thriving ahead of Tarzino at Hastings

Six-year-old mare Kiwi Ida is in fine fettle heading into Saturday’s Gr.1 Tarzino Trophy (1400m) at Hastings with the John and Karen Parsons-trained mare staying in the Waikato after her fresh-up sixth placing in the Gr.2 Foxbridge Plate (1200m).

The multiple Group Two winner and Group One-placed sprinter has been installed a $14 chance for Saturday’s contest and gets to her preferred 1400m distance.

Eight of her 14 career victories have come over 1400m and Kiwi Ida has taken good improvement from her first-up performance but has six lengths to bridge on race favourite Avantage ($1.70).

“She was pretty brave given she was fresh-up and she never got closer than four-wide to the fence,” Parsons said of the mare’s Foxbridge Plate run.

“We have been based with Sarah Broughton near Mystery Creek and she is just marvelous.

“The horses look absolutely fantastic. She rides them for me, and she looks after them if I go home. She does a wonderful job.

“She is right opposite Mystery Creek and we do our fast work at the Te Awamutu track, which is lovely.

“We’ve got our own track at home and we go to the beach, so we’re not used to the hubbub but Te Awamutu is pretty quiet and relaxed.”

Parsons is yet to confirm a rider for Kiwi Ida but has had a few jockeys chasing the mount.

Kiwi Ida holds a nomination for the Gr.1 Windsor Park Plate (1600m) but is a doubtful starter in the second leg of the Hawke’s Bay Triple Crown, with Parson’s notion of stretching the mare likely to be over-ruled.

“I’ve got her in the mile, and I wanted to try again because she is older and stronger and her racing style looks like she will get it, but John and Chris (Johnson, jockey) don’t think she will get the trip.

In seven starts beyond 1500m, Kiwi Ida has not troubled the judge.

“The only thing I am worried about is the fact he hasn’t had a start for eight weeks, but he looks a million dollars and he is working well,” Parsons said.

“Tommy and John weren’t keen to run at Awapuni because they don’t like the jumps there, so I have had to get him ready without a run, but we are pleased with him.” 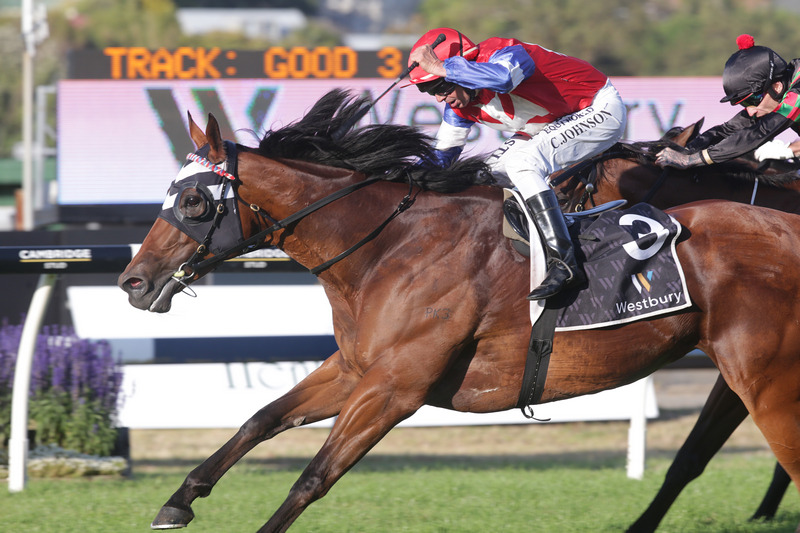 New Plymouth trainer Allan Sharrock had a golden run in the Gr.1 Tarzino Trophy (1400m) a few years ago, winning three on-end, and he is hoping he can add a fourth to his mantlepiece after Saturday.

Sharrock’s first victory in the race came in 2014 with I Do and he followed that with victories in the 2015 and 2016 editions with Kawi.

He will contest this year’s race with pocket rocket Tavi Mac, who while small in stature has proved to have an iron willpower, evidenced by his brave runner-up performance behind Avantage in the Gr.2 Foxbridge Plate (1200m) at Te Rapa earlier this month.

“It exceeded my expectations, but he is that sort of horse,” Sharrock said. “He has got a bit of a following and is one of those genuine little fellas that doesn’t want to give in.

“He would make a great halfback for the All Blacks, this fella.”

“You wouldn’t have bought him out of the paddock, and he would still be in the paddock now if I didn’t breed him for Mr McCallum.

“You wouldn’t have tried him. But he defies science, it is his character and will to win that makes him the horse he is.”

Sharrock has been pleased with the way his gelding has come through his Foxbridge Plate run and said the current Dead4 track conditions are not a concern.

“His work was exceptional this (Tuesday) morning, and he hasn’t missed any feed,” he said. “I haven’t seen a negative since his Foxbridge Plate run, he has been very good.

“I don’t think it (track conditions) worries me either way. He has broken 1.22 for 1400m and he is capable on wet ground.

“They are meant to get rain on Thursday and Friday, so I think it will hold a genuine dead and that holds no fears for me.”

Tavi Mac’s biggest danger in the race is last start vanquisher Avantage and Sharrock believes it will be a mammoth task to beat the Jamie Richards-trained mare.

“Class is permanent and she is all class,” Sharrock said. “I have had those sort of horses myself and I have won that race three times.

“She is by far the hardest to beat and probably only bad luck will beat her.”

Tavi Mac will be joined on his trip across the North Island by stablemate Waisake, and Sharrock is expecting a bold showing from the six-year-old gelding.

The talented but injury plagued Demonetization has been ruled out of Saturday’s Gr.1 Tarzino Trophy (1400m).

The Group Two winner looked to be back to his best with two wins this preparation before an eye-catching fourth-placing in the Gr.2 Foxbridge Plate (1200m) last start, however, a bruised heel has halted his Group One aspirations this weekend.

“Unfortunately he bruised a heel and I think his chances of making the race were slightly less than 50-50,” trainer Nigel Tiley said.

“We have to take the shoe off him and the chances were that we wouldn’t be able to get the shoe back on him until Wednesday or Thursday.

“It is quite and expensive exercise to keep paying up, so we thought we would take the cautious approach and have a crack at the Windsor Park Plate (Gr.1, 1600m). I hope he gets a start.”

“We have sold a quarter of him to clients of Brad Spicer’s and the original ownership retains three-quarters of him,” Tiley said.

“He is a horse that is still coming through the grades and he can race for some serious money over there.”