Kings Shield dominates with Dubai on the radar

Kings Shield put his rivals to the sword with an authoritative all-the-way win in the Class 2 Hebe Hill Handicap (1650m, dirt) at Sha Tin on Wednesday. 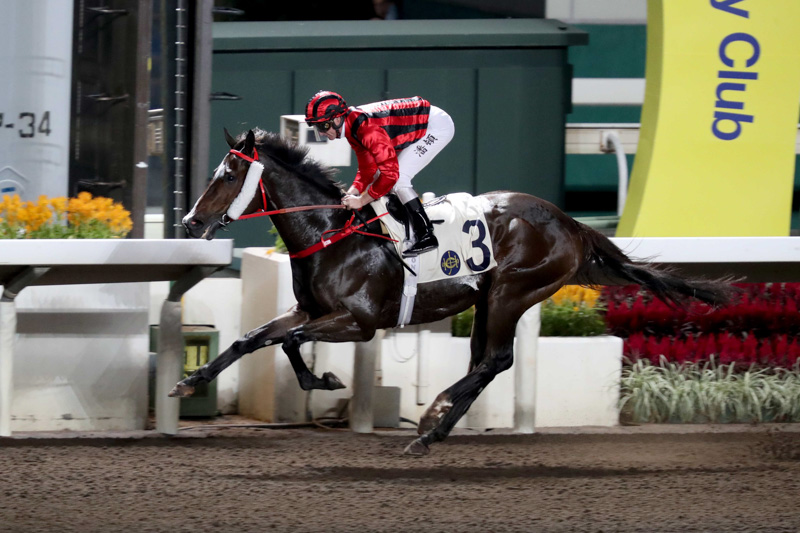 The former British-trained import has developed into a force to be reckoned with on the dirt in Hong Kong: this latest win, his third over the course and distance, was achieved off a rating of 98 and will lift him to a triple-figure mark.

But with high class dirt races a rare commodity in Hong Kong, trainer Frankie Lor may have to consider overseas options at a time when international travel is uncertain.

“We’re planning to go to Dubai but we don’t know, with the virus, whether we can go or not, but in Hong Kong there’s not too many dirt races, so I still need to race him on the turf to keep him fit,” Lor said.

Lor’s first overseas sortie as a trainer came in the 2019 KOR G1 Korea Cup (1800m, sand) with Glorious Artist, who finished fourth in Seoul but went one place better tonight for third behind his stablemate, while the Tony Cruz-trained Star Performance split the pair in second.

King’s Shield has never been short of quality. The five-year-old finished sixth in the 2018 G1 Poule d’Essai des Poulins (1600m) at Longchamp and fifth in that same year’s G1 St. James’s Palace Stakes (1594m) at Royal Ascot, but he has turned into a dirt specialist in Hong Kong with his third win on the surface coming at his sixth attempt.

“Zac (Purton) said he’s totally a different horse on the dirt,” Lor said. “The last 400 (metres) when they came near him, he asked him to go and he went again.”

The gelding’s sire, Scat Daddy, was an American G1 winner on the dirt, taking the 2006 Champagne Stakes (1600m) at Belmont Park.

“He’s a different horse on the dirt,” Purton confirmed. “Frankie’s (Lor) done a good job to get him ready for the race, not being able to run him in the races he’d like.”

The gelding broke cleanly and was fast to stride, setting the tempo from the get-go, and when the champ asked the favourite to quicken and win his race, he did exactly that, resulting in a three and three-quarter length score, stopping the clock at 1m 39.22s.

“When he flew the gate like he did and jumped straight into the bit, he made it easy for himself and it was easy in the end,” Purton said.