The planets had seemed to align for King Arthur when the final field was released for Sunday’s $70,000 Class 3 race over 1000m at Kranji on Sunday, after the Fortuna NZ Racing Stable-owned four-year-old, drew gate one in a race that suited.

However, the Polytrack scamper looked a strong race on paper and with the smart Sun Ops (Manoel Nunes) resuming and the in-form Happy Moments (Benny Woodworth) also in the field, he would need to be at his best to win.

Win he did, with 3kgs-claimer Yusoff Fazli riding the perfect race on the $25 third-elect when using the inside gate to his advantage and stalking the favourite in Sun Ops ($14) throughout. 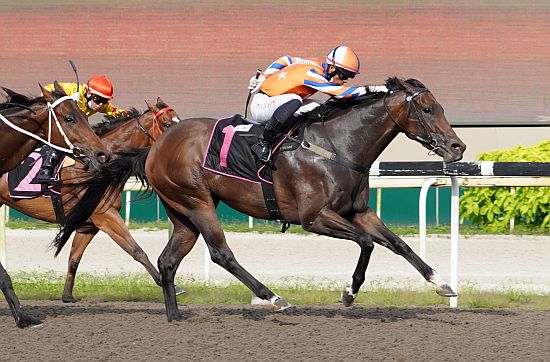 And when Sun Ops – who had to do some work early after a tardy start – got tired late, it was King Arthur who loomed the biggest danger and under hard riding by the promising Malaysian apprentice jockey, won comfortably by one length over the fast-finishing Sky Eye (Iskandar Rosman).

Sun Ops - who was first-up after a bleeding attack - held on manfully for third place, another three-quarters-of-a-length back and the winning time was 59.15secs on the Polytrack over 1000m.

Oddly - given his record on the Polytrack and more so over 1000m - spoke for itself, even trainer Donna Logan was a little surprised with the win.

“Yeah look, I thought the horse was a little bit big today, that he might improve for the run – we know he will,” explained Logan.

“We freshened him up for this race to progress on but obviously it worked.”

Logan, fresh herself after an overdue trip back to New Zealand, was also full of praise for her apprentice rider.

“We opted to claim the 3kgs with Yusoff and he rode him to instructions and he did well,” continued Logan.

“I said to Yusoff, you’ve drawn one and you’ve got to use the barrier draw.

“But I just wanted him to be two or three wide when they turned for home – they seemed to be coming wider as the days gone on – so he followed instructions to a hundred percent.”

And as a trainer, you can’t ask for more than that.

A breathless Yusoff was understandably very happy when talking to presenter Raymond Yong, after the win.

“For me, he’s a very good horse,” said Yusoff of his third winner for the season, putting him onto the fourth spot in the apprentice jockeys’ premiership.

“This race was very strong but a lot of the horses are frontrunners, so my instructions were to just maybe sit behind (the) leader, (then) bring him out in the open in the straight.” 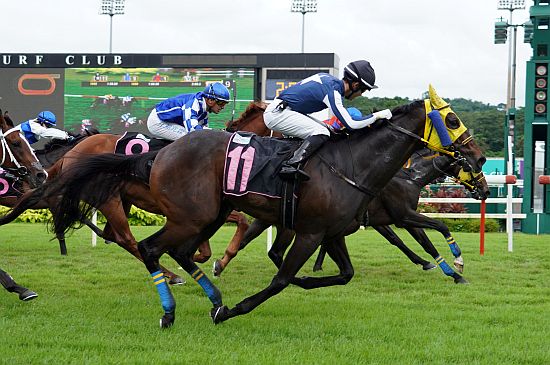 Star Jack (Wong Chin Chuen) bounded home on the outside to a last-gasp win in Race 9, picture Singapore Turf Club

One of the other more interesting races on the card - with one eye on some of the progressive four-year-old's with Derby aspirations (The Group 1 Singapore Derby over 1800m to be held on July 17) - was the $50,000 Class 4 race over 2000m.

And it was one of the four-year-old's in Hero, with the in-form Nunes aboard, who started as the $17 favourite and from gate one, he was sure to get a gun run and looked the horse to beat on paper with winning form under his belt.

But as is the case in any distance event, it always pays to have a second look at any horse trained by Hideyuki Takaoka, and the Japanese handler had a two-pronged attack in Wind Trail (Marc Lerner) and Star Jack (Wong Chin Chuen) in the 12-horse field.

Wind Trail had the recent form on the board and his starting price of $24 suggested he would have a big say in this finish. While he did indeed figure at business end, not many had Star Jack coming over the top of them all late at any old odds ($102) to win by a short head over his stablemate, with Hero another neck away in third.

His jockey – the man they call “Jimmy” Wong – explained:

“This horse has to have everything suit him,” said the baby-faced rider.

“You have to get him (to be) relaxed, he needs a good tempo to get him into the race and today everything worked out perfectly for me.

“Yes, this race was a bit strong but everyone knows he can stay the distance.”

The win, in the time of 2min 02.99secs on the Short Course over 2000m, also gave Wong his 18th winner of the season to put him in outright third position on the jockeys’ premiership.

“Of course, I’m very happy to be in the top three. But again, thanks to all the trainers who (have) supported me,” said a humble Wong.

“I have to keep working hard and keep going”.

Elsewhere on the card, Nunes extended his lead in the jockeys’ premiership to an amazing 25 with a treble (Big Green Hat, Dancing Light and Resurgence), while Lerner knocked in a well-deserved double with Zygarde and Hyde Park.

In the trainers ranks, Tim Fitzsimmons continued his good year with another two winners in Dancing Light and Resurgence but shared honours on what was an exciting day at the races with Logan (Olympia and King Arthur) and Stephen Gray (Laksana and Hyde Park).