It is the final Classic of the year in Japan this coming Sunday, and there’s a real buzz in the air that there could be a Triple Crown winner just waiting to walk away with the title. Contrail is looking to become just the eighth Triple Crown winner in Japanese racing history, and the first since Orfevre in 2011.

The Grade 1 Kikuka Sho (Japanese St. Leger) was first run in 1938 and was given its current name in 1948. It’s run over 3,000 meters on the outer turf course at Kyoto Racecourse, and is open to 3-year-olds, with the exception of geldings. All the runners carry a set weight of 57kg. There’s certainly plenty of interest from connections wanting to have a crack at defeating Contrail, with 29 horses having been nominated for a maximum 18 runner field.

Step races leading to the 81st running of the Kikuka Sho (Japanese St. Leger) include the Grade 2 Asahi Hai St. Lite Kinen, run over 2,200 meters at Nakayama in September, and the Grade 2 Kobe Shimbun Hai, this year run at Chukyo over 2,200 meters, also in September. Both of these races are official trials for the final Classic of the year. Five first favorites have won the big race in the last ten years, with Kiseki the last one to do so in 2017. Record time for the race belongs to the fiery Toho Jackal, who won in 2014 in a time of 3 minutes 1.0 seconds. This year’s winner’s check is JPY120 million.

The race will be Race 11 on the Sunday card at Kyoto, with a post time of 15:40 here in Japan. The final line-up and barrier draw will be announced later in the week. 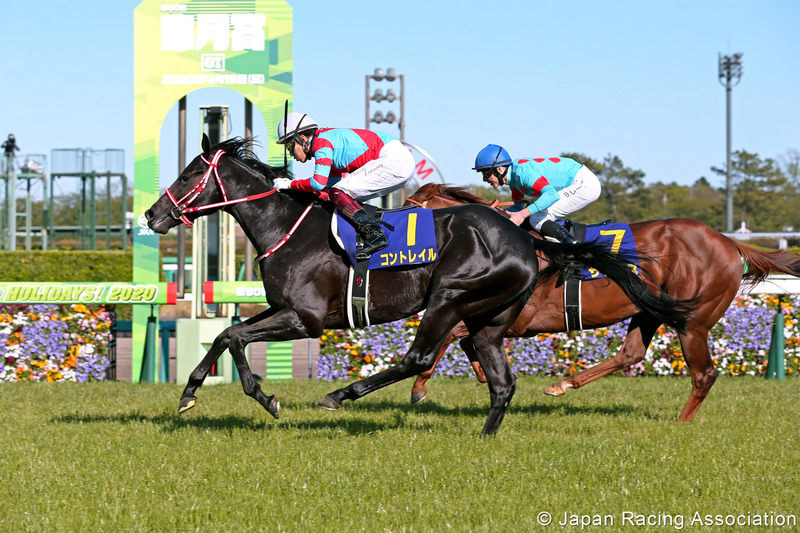 Here’s a look at some of the runners expected to take on the race:

Weltreisende - The Dream Journey colt has had to play second fiddle to Contrail a number of times already, including his last outing in the Grade 2 Kobe Shimbun Hai, where he finished second. He’s a half-brother to last year’s Kikuka Sho winner World Premiere, and is trained by Yasutoshi Ikee, a two-time winner of the race. The trainer is hoping for a big run after one or two setbacks with the horse. “He’d broken a bone in his foreleg after the Derby, and a while ago he had a fever, but he’s recovered from both without any problems. This has meant he’s taken some time to come back to himself, but now he’s making up for lost time and is showing good form in training,” said Ikee.

Galore Creek - The horse that finished sixth in the Tokyo Yushun (Japanese Derby) tuned up for this race with a third place finish in the Grade 2 Asahi Hai St. Lite Kinen at Nakayama last month. He’ll have to travel over from the Miho training center for what will be his first race at Kyoto. Trainer Hiroyuki Uehara commented: “He’s a horse that gets better with his races, and the jockey thinks so too. He was still a bit loose last time, but even so, he showed what he’s capable of doing, despite it being his first run in a while.”

Babbitt - Snapped up for just over JPY5 million at the 2019 Hokkaido Training Sale, the colt by Nakayama Festa has won his last four races, the latest being the Grade 2 Asahi Hai St. Lite Kinen over 2,200 meters last month. His front running displays have proved stamina is on his side, and while there’s an extra 800 meters to see out this time, trainer Tamio Hamada is impressed with the horse. “He’s able to get to the front in his races and run good times, as could be seen with some of his furlong times below 12 seconds in the St. Lite Kinen. Even though the ground was different, his overall time was 0.5 seconds faster than the All Comers. I like the fact he has speed and stamina,” said the trainer.

Satono Flag - The Northern Farm bred son of Deep Impact was slightly disappointing in the Tokyo Yushun (Japanese Derby) when he could finish only eleventh, but on his seventh start last time he managed to finish second to Babbitt in the Grade 2 Asahi Hai St. Lite Kinen. Trainer Sakae Kunieda feels the horse is improving. “I was surprised the winner managed to stay on last time in the St. Lite Kinen. Nevertheless, my horse kept going until the end as well and it seems he’s running better now than in the spring. Everything’s fine with him at the stable right now,” said Kunieda.

Deep Bond - Another runner for owner Shinji Maeda, the colt by Kizuna is another who ran in the Tokyo Yushun (Japanese Derby), finishing fifth, and then finished fourth in his prep race most recently, the Grade 2 Kobe Shimbun Hai over 2,200 meters at Chukyo in September. Trainer Ryuji Okubo said, “As in the Derby, he got into a good position last time, but didn’t quite have enough at the end. If he can run like he did in the Kyoto Shimbun Hai earlier this year, just being a little more patient, he’s capable of winning races.”

Anticipate - Likely to be the ride of Yutaka Take, Anticipate has now strung together three straight wins, and his latest was over 2,600 meters in the Akanko Tokubetsu at Sapporo in August. “He had a break at Oiwake Farm in Hokkaido after his last race, and this has been the target for him. Last time he raced in second for a while before grabbing the lead and going on to win. I think it’s best if he races at the front,” said trainer Sakae Kunieda. The Rulership colt will be having his seventh start on Sunday.

Robertson Quay - Trained by Toru Hayashi at the Miho training center, Robertson Quay ran in his first Graded race last time and finished third in the Kobe Shimbun Hai at Chukyo in September, not that far behind Contrail. He’s only had four races, but the trainer thinks his best is yet to come. “It was a big run last time over the extended trip and he coped well with everything, thanks to the jockey. The horse is still young and inexperienced, so I think further improvement can be expected,” commented the trainer recently.