Keeneland January Horses Of All Ages Sale Day One results

Applauding, an 11-year-old winning daughter of Congrats in foal to Curlin, who was consigned by Hill ‘n’ Dale Sales Agency, agent, was a $360,000 private sale purchase by Hunter Valley Farm, agent, to lead Monday’s opening session of the Keeneland January Horses of All Ages Sale.

Session-topper Applauding (HIP 135 pictured) is out of the Forestry mare Andria’s Forest and from the family of Grade 2 winner Crafty C.T.

On Monday, two horses sold for $335,000 apiece. The first is Zia, a stakes-placed daughter of Munnings in foal to Into Mischief who sold to Nicoma Bloodstock, agent. Ballysax Bloodstock, agent, consigned Zia, who is out of the Sadler’s Wells mare Faux Pas (IRE) and from the family of English champion Negligent (IRE), Grade 2 winner Selflessly and Grade 3 winner River Seven. 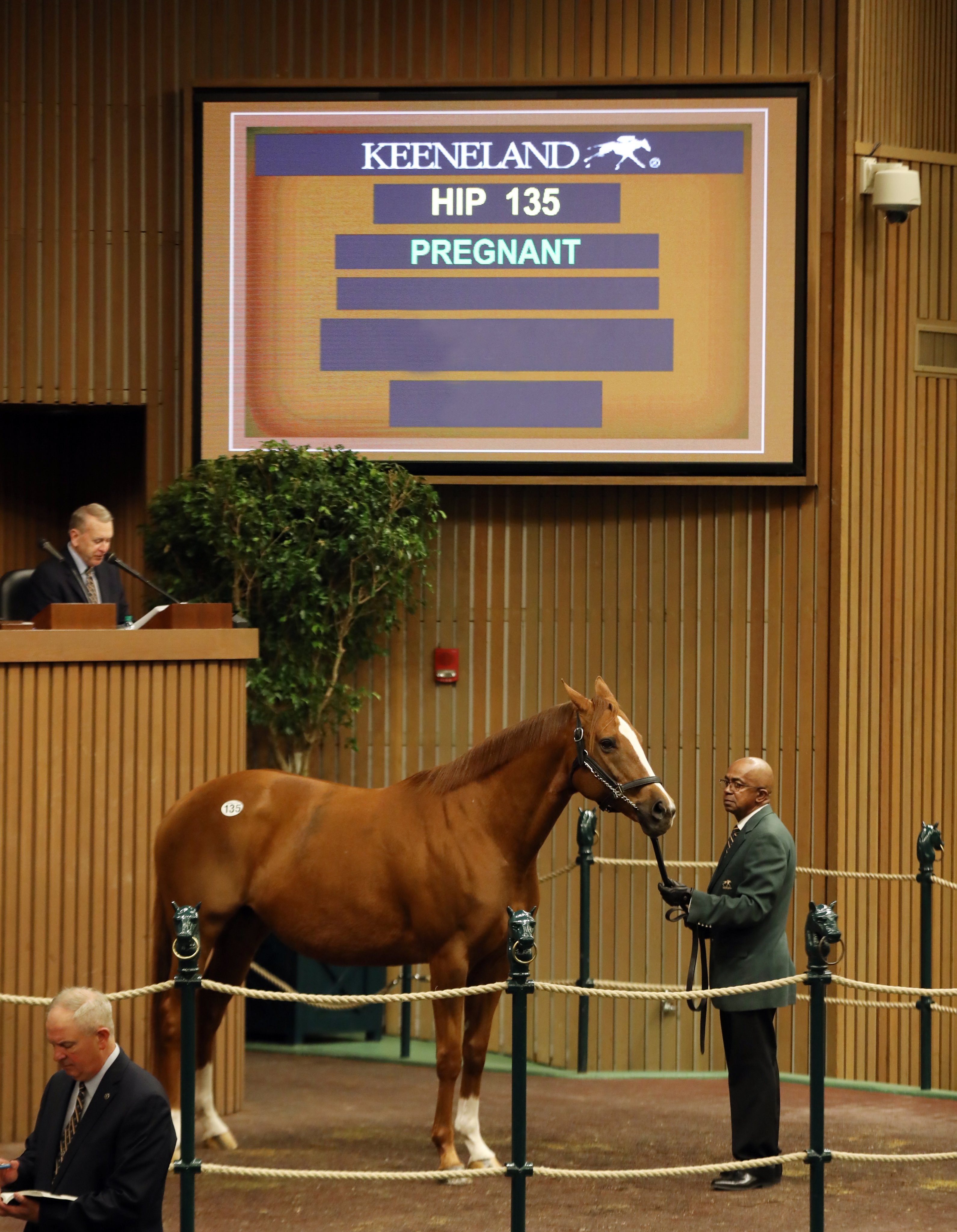 “(Mares in foal) to Into Mischief are tough to buy so we’re excited to give it a shot,” Nicoma’s Price Bell Jr. said. “She’s a nice young mare. (The price) felt like a fair market for January. There is quite a bit more depth to come, so we were excited to try and strike early. We’ll get her back to the farm and figure out (her plans) from there.”

“We made the decision to put her in this sale during the (2019 November Sale),” Ballysax Managing Partner Carl McEntee said. “(The client bought several horses) in November, and we thought this was the right time to put her in the marketplace.”

The other $335,000 seller is stakes winner Moonlit Garden, a 6-year-old daughter of Malibu Moon, who was purchased by D.J. Stable. Vinery Sales, agent, consigned Moonlit Garden, a half-sister to multiple Grade 3 winner Title Contender, who was cataloged as a racing or broodmare prospect. She is out of the Grade 3-winning Roy mare Winter Garden.

“The price was fair, and we are happy with it,” Vinery co-owner Derek MacKenzie said. “It always helps to be both a racing and broodmare prospect. (The interest in her) was pretty mixed, probably right down the middle (between breeders and racehorse owners).”

The session’s most expensive yearling is a colt by Quality Road out of Grade 2 winner Foxysox (GB) sold for $310,000 to First Finds. Denali Stud, agent, consigned the colt, who is a half-brother to stakes winner Curlin’s Fox and from the family of multiple Group 3 winner Jester.

“He was exceptional, and I have had a lot of luck with Quality Road,” buyer Tami Bobo said. “He was a horse we needed, and I am looking forward to pinhooking him. I was not surprised by the price. He’s beautiful, he’s forward, he looks early. He is the kind of horse you want to (resell later this year). If the stars align, we’ll try.”

“This was a beautiful colt with a tremendous profile to him,” Denali Vice President Conrad Bandoroff said. “It didn’t take much imagination to see what he could hopefully grow into. He was bought by a very astute judge, and it’s definitely a compliment to the colt.”

Quick Trigger, a yearling colt from the first crop of Gun Runner, sold for $300,000 to OXO Equine. Select Sales, agent, consigned Quick Trigger, whose dam is the stakes-placed First Samurai mare Onna Bugeisha. He is from the family of Group 3 winner Tazeez.

de Meric Stables, agent, was Monday’s leading buyer with five purchases for $712,000. At $290,000, de Meric’s most expensive acquisition is a Gun Runner colt consigned by Denali Stud, agent. The first foal out of stakes-placed Sunday Sonnet, by Any Given Saturday, he is from the family of Irish champion miler Prince of Birds and multiple Grade 3 winner Pianist.

Nick de Meric called the Gun Runner colt “an outstanding athletic individual” and said he bought him for Klaravich Stables.

“Plan A would be for this horse to go right to races (instead of reselling at a 2-year-old sale),” de Meric said. “We will raise him and break him in the fall and prepare him for a career at the track.

“We knew he would not be cheap,” de Meric added. “I think this same horse would bring 30 or 40 percent more (in the Keeneland September Yearling Sale). That is what we are gambling on: that we are not competing with the entire yearling-buying public. Not to say there isn’t competition here, because there is.”

“That’s a nice way to start the year,” Denali’s Bandoroff said. “He was raised by Bill Landes and his team at Hermitage Farm, and they raised a wonderful horse. It was a case where he was a quality offering and a big fish in a smaller pond compared to (the November Sale). He really had a swagger about himself and handled everything in stride and was a really fun colt to have in the barn. Best of luck to the de Merics, and we look forward to tracking him in the future.”

The January Sale continues Tuesday with the second of two Book 1 sessions.