Jupiter Gold out of Merlion Trophy, future up in the air

The long wait for a racing comeback was nearing its end, but former Singapore Derby winner Jupiter Gold won’t get to race at all this year.

Unsighted since the last 2020 meeting on December 27 when unplaced at the second of only two appearances for the season (also unplaced at the other one, the Group 2 EW Barker Trophy), the injury-plagued son of Congrats was gearing up for what was to be his Kranji reappearance – and only 2021 start in the $110,000 Group 3 Merlion Trophy (1200m) at the very last meeting on November 27.

Trainer Hideyuki Takaoka had to show a lot of patience in treating his nine-time winner’s tendon issues. Things were looking up, only for hoof problems to flare up, which slowed down even further the comeback process. 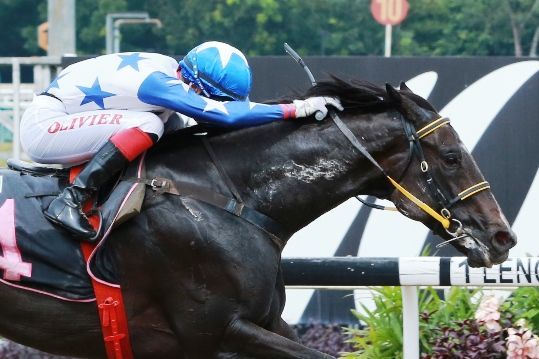 Vets and farriers seemed to have got on top of them in time for the Polytrack sprint, but unfortunately for Takaoka, his owner Kaz Hosaka, and fans, the problem has reared its ugly head again.

Jupiter Gold was entered for the barrier trials on Thursday, but was scratched at the last minute.

“He was a little sore in his right front hoof again on Tuesday,” said Takaoka.

“He couldn’t run in the trial. We had him checked and the stone bruise infection means he can’t be fit in time for the Merlion Trophy.

“In any case, that barrier trial was important for a horse who hasn’t raced for one year. Missing it meant he would have gone into the race unfit, I would have scratched him, anyway.”

Takaoka, who recently retired Group 1 Raffles Cup winner Makanani, would not speculate on Jupiter Gold’s future, preferring to leave that decision to the owners.

“I’m not sure. There are a few partners who own him, they have to reach an agreement among them,” said the Japanese handler.

While the four-time Singapore Gold Cup-winning trainer may not have made his presence felt in the better races this season, the score of 26 winners was worlds apart from his paltry score of nine winners from the first COVID-19-affected season in 2020.

Takaoka’s strength has laid in the Class 5 races this year, with a whopping 20 coming among cellar dwellers for a close to 80% percentage.

The soft-spoken handler shrugs off the “Class 5 king” title, happier with the fact he has turned in a decent haul for his owners given the increasing difficulties brought by the pandemic and the racing industry downturn, but would certainly like to claim this Saturday’s highlight, the $70,000 Kranji Stakes C race over 2000m.

Just like Real Efecto, Wind Trail was nominated for the Group 1 Singapore Gold Cup (2000m) won by Lim’s Lightning on Sunday, but with the four-time-winning Screen Hero six-year-old’s ratings (67) even lower than Real Efecto’s (69), who was the second standby starter, he missed out.

“The longer the better for him. At his last start, he ran on for a close fourth (to Trumpy) in a 1800m (another Kranji Stakes C) race.

“The field is quite strong, but I hope he can run a nice race and even win the race.

“He has maintained his condition since his last start. (Race-rider) Marc (Lerner) galloped him on Tuesday and was quite happy with him.”