Kim Hye-sun cruised past another landmark figure this past weekend as the jockey, already by far the most successful female rider in Korean racing history, raced past the three-hundred career winner mark, on the way to notching a four-timer at Busan Racecourse on Sunday.

Starting the day on 298, Kim guided faovurite Unju Hero to victory in the opener but then faced a nervous photo-finish to race 4 aboard the fast finishing 6.1 chance Daeseung E. Ultimately, the judges couldn’t split Daeseung E and Flashy Charm, with a dead-heat the verdict and the three-hundred confirmed.

“I really didn’t know if I’d finished 1st or 2nd as I was riding the finish hard.” Kim told in-house broadcaster KRBC after the race. “But when I came back everyone congratulated me. I wanted to win but I’m more than happy to dead-heat and share the victory with Kim Tae-hyun (on Flashy Charm).”

Not that Kim was expecting to achieve the landmark victory on Sunday. “To be honest I didn’t expect to make three-hundred wins, because just getting one win on any day is so very hard. I was impressed with how Park Jae-I rode on Friday (getting three winners) and I really wanted to ride better today.” 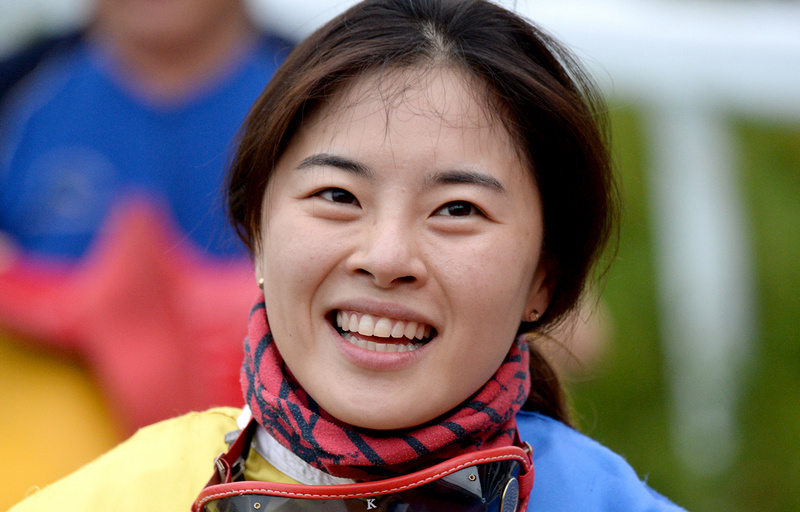 Fellow jockey Park Jae-I is Kim Hye-sun’s husband and Kim gave birth to the couple’s first child, a son, on July 1st, 2020. The thirty-three-year-old returned to race riding eight months later, in April of this year.

“I’d be lying if I said I wasn’t a bit worried” Kim explained to KRBC. “I’d thought about it a lot. I had become a mother and maybe I got a bit impatient and came back early, but I was ready. Fortunately, other people were telling me I was readjusting well and maybe even riding better than I was before.” Kim rode a winner on her first weekend back.

Kim Hye-sun debuted in 2009 and was based in Seoul for her first nine seasons. Her best year for winners so far was 2016 when she found the winner’s circle 49 times from 570 mounts. Having already long since overtaken Lee Shin-young to become Korea’s all-time leading female jockey in terms of winners, in 2017 she also became the first to ride a Classic winner, when she partnered Jejui Haneul to victory in the Korean Oaks.

A full-time move to Busan followed for the 2018 season but an injury sustained in a fall limited the immediate impact Kim could make, although on her return she was able to successfully keep the winners ticking over until her maternity leave. Now back and arguably in the form of her life, Kim added a further two winners on Sunday after the dead-heat, including the feature class 1 handicap on 10/1 chance Brave Kingdom.

“There aren’t many female riders here, and I always want to thank racing fans for their support and want them to know that we can ride as well as anyone.” With three-hundred winners and a Classic in the books, Kim Hye-sun has few doubters.