It's Me reaches The Kosciuszko

Jason Collett is making a habit of extracting himself and rides from difficult positions and he did it again on It’s Me in the $1.3m, The Kosciuszko (1200m) at Randwick on Saturday to get the $1.95 favourite home by a head margin in the final strides.

While Redouble (59kg) and Tommy Berry were taking the rails route home Collett had to move sideways at the 300m to force It’s Me out into clear running room out in the middle of the track. Once out and balanced by Collett the unbeaten Shamus Award mare lengthened well and charged after Redouble.

Redouble (Redoute’s Choice) and Berry were clear of Man Of Peace (Zariz) (58kg) and apprentice Louise Day in third, the margin 1 1/4L. 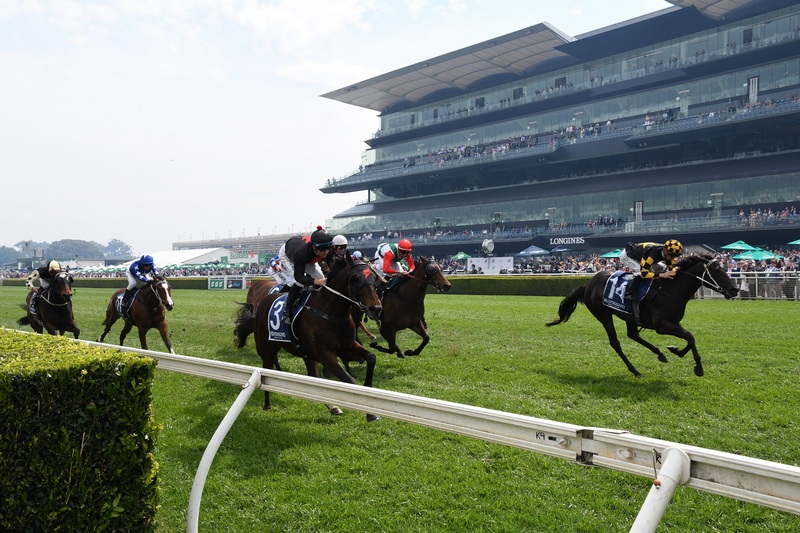 Redouble and Tommy Berry on the rails with It's Me and Jason Collett outside, picture Stevehart.com.au

“J Collett, I thought he tried to get her beat. It was ugly, wasn’t it, but it worked," said trainer Brett Cavanough.

“When he went into traffic, into a black hole on her I thought ‘well, we’re in some trouble here’. But gee whiz he did a bit of campdrafting to get out and he got the job done.

“Obviously she’s a very good mare. Are you allowed to cry?

“They’re both pretty special horses, there’s not much difference between them two at home but race day she just finds six or eight lengths, she’s just amazing.

“You see what she did today, she was in trouble, knocked them down, got down, balanced up and got the job done.

“I thought one of those old horses would come to the fore today. It was Mitchell Beer’s horse. He was a tough old horse first up, good form and she still got the job done to beat him,” he said.

“She’s the best horse. She hit a few little obstacles into the straight. Just had to be patient and once I got her into clear air, I didn’t quite see Redouble scooting up on the inside and I just had to ask a bit more of her," said Collett.

“But it was a far bigger test today, she passed with flying colours.

“She was impressive early days. It’s hard to be dreaming (of a Kosciuszko) then but it’s worked out.

“I can’t quite tell you how high she’ll get to but the way she’s going I would like to say Group 1,” he said.

Well done It's Me, picture Sportpix.com.au

Blaike McDougall (Lord Von Costa): “He blew the start. Was on the back foot all the way. Was on the back of Redouble for the majority of the race. He is better than that. Has a habit of running races like that in between his good races.”

Tommy Berry (Redouble): “Massive effort. I just wish the winner was a bit closer to me in the finish. When the winner dashed through he was on his own and he felt like his job was done. Massive effort.”

Sam Clipperton (Intuition): “Had a nice run. Once he balanced up he ran on OK.”

Louise Day (Man Of Peace): “Super effort. Very gutsy and tried all the way to the line.”

Andrew Gibbons (Ligulate): “He got crunched out of the gates and was chasing the whole way.”

Koby Jennings (Al Mah Haha): “We were racing pretty tight in between horses the whole race. He’s not that sort of horse. I was hoping Handle The Truth would keep kick. We didn’t get much momentum into the race. He’s run well.”

Kerrin McEvoy (Fender): “Ran a nice race. Got a little bit outpaced the last furlong and a half.”

Brenton Avdulla (Anethole): “He ran well. Had to drag him back from the gate. Ended up following the winner through. He kept chipping away.”

Greg Ryan (Ice In Vancouver): “He never travelled from the word go. He was labouring all the way. Gave her two cuts of the whip but wasn’t happy with the way the horse felt so dropped my hands on him. He may have some sort of injury.”