Trainer Steven Burridge was more concerned about getting a dry track than Ironchamp’s awkward gate ahead of the $70,000 Class 3 race over 1400m at Kranji on Saturday, but needn’t have worried with the skies staying blue right through.

The speedy five-year-old son of Glass Harmonium made the race his own from the start when he easily overcame barrier No 12 to take up the running.

The Australian handler’s confidence kept growing with local apprentice jockey Krisna Thangamani able to give his mount a breather midrace, not to mention the advantage of having no weight on his back given he was up in grade. 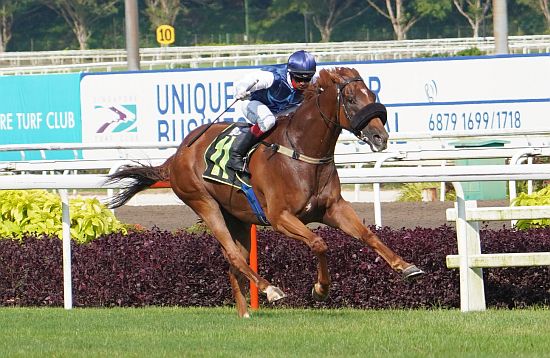 Tacking on in an ideal fourth place on the rails, Sacred Judgement (Jerlyn Seow Poh Hui) valiantly tried to claim a fifth win in a row at the 300m mark, but Ironchamp ($20) was not for catching with a pinching run that left Sacred Judgement chasing shadows, despite sticking on gamely in second place 1 ¼ lengths away.

Karisto (Danny Beasley) ran on well to finish third another half-length away. The winning time was 1min 21.9secs for the 1400m on the Long Course.

“This horse doesn’t like the wet, so I was worried about the track, but not so much the outside draw as he’s a natural leader,” said Burridge.

“Today, he also had the right weight (51 kilos after Krisna’s two-kilo claim) going up to Class 3. As you all know, weights are a big burden, and to have such a low weight sort of helped him.

“I backed him up after his run last week (second to King’s Command in a Class 4 race over seven furlongs last Saturday). He was anchored down by the weight and he fly-jumped at the start.

“The jockey (Yusoff Fadzli) had to use him to get there. He still got along good.

“But today, he also had nothing to take him on. It’s worked out very well.

“I’m really happy for his owners Chee Kiong and Mr Tan (CK Stable). They also own Ironclad (three-time winner) and Ironprince (still a maiden) with me, and it’s great to train another winner for them.”

Along with six placings (three seconds and three thirds), Ironchamp has now recorded three wins from 17 starts for prizemoney that has now tipped over the $100,000 mark for the CK Stable.