Emergency acceptor Irish Flame (NZ) has overcome a torrid run and then holding off a late challenge from the hometown favourite Affair To Remember to claim a thrilling victory in the $500,000 Listed Ballarat Cup (2200m) on Saturday.

Irish Flame only gained a start in Saturday’s race following the scratching of Power Scheme and was forced to cover plenty of early ground from his wide draw.

Jockey Michael Walker made the decision to press forward but was four and five-wide early before getting in three-wide with 1000m to run.

Trainer Brett Scott admitted to concerns when the pace quickened with 700m to run and Irish Flame was put under pressure.

However, the Mornington-based trainer was impressed with the gelding’s tenacity.

In a tight finish Irish Flame ($18) scored by a half-head from the $3.90 favourite Affair To Remember with Game Keeper ($20) the same margin off third.

Our Big Mike led the field early from Inverloch with So Si Bon and Pacodali in close attendance. Passing the 700m, Daniel Stackhouse aboard Inverloch put the foot down and the pace increased.

Turning for home, Inverloch and Our Big Mike were quickly beaten off, firstly by So Si Bon and Pacadali before the cavalry arrived out wide.

Irish Flame joined in with 200m ran as Affair To Remember was weaving a passage through the field as was Game Keeper bursting through on the inside.

Harlem (fourth) and Odeon (fifth) had a bit of a bumping duel late in the race after which Daniel Moor, on Odeon, lodged an unsuccessful protest against Harlem. 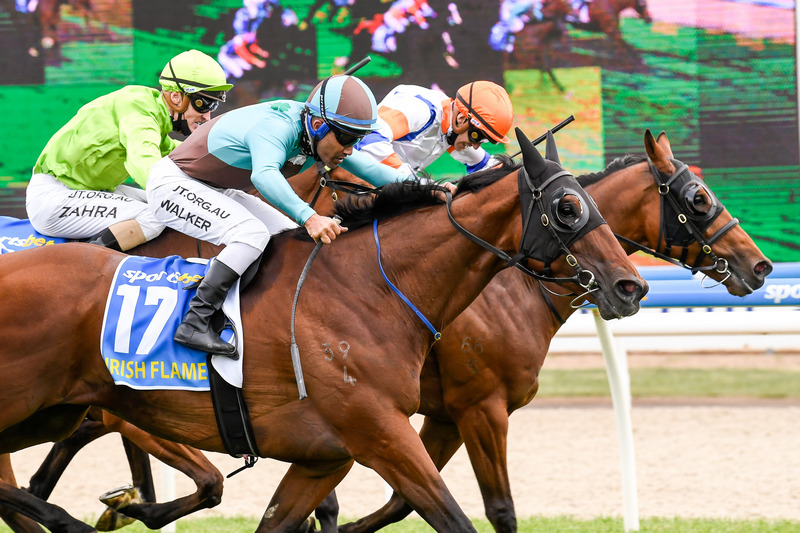 Irish Flame (NZ) and Michael Walker have the best of a busy finish, picture Racing Photos

The $500,000 prize money brought together the best Ballarat Cup field that could be remembered and included too former Group 1 winners.

But Irish Flame had the form on the board and on Saturday completed a winning hat-trick with his narrow victory.

A former champion jumps jockey, Scott said Irish Flame had been with his former boss John Wheeler in New Zealand before making his way to Australia.

“He’s a Zed and won a two-year-old race in New Zealand at his second start,” Scott said.

“He was a handy horse. He was in the Derby but wasn’t good enough but since he’s been in Melbourne every race has been good.

“He’s improved with every run and he’s a good, tough stayer.”

Walker and Scott have had a long association with Walker remembering it was Scott that first taught him how to ride.

The jockey said it was extremely pleasing to win aboard Irish Flame for Scott and his wife Kylie.

“Kylie and Brett Scott have done a tremendous job having that horse fit today,” Walker said.

“He got to the front today and he was going to win by three (length) and he pulls up when he hits the front, but I was lucky that they got to me a long way before the post. He kicked again.

“The horse had a hard run but I wasn’t worried because they only went steady so I was happy where I was.

“If he found the line, he had three lengths on them but he just won’t run away from them.

“I’d just like to thank all the owners for the opportunity and keeping me on him.

“I couldn’t ride him the other day when I had a sore neck and to Scotty and Kylie and the whole team at Mornington, they do a tremendous job.

“Scotty has been a rider himself, albeit over the jumps, he’s a champion rider.

“I’ve got no doubt he’s going to make a champion trainer, too.”