In-form racemare Paradee (by Epaulette) recorded the most significant black-type success of her burgeoning career when claiming the $200,000, Group 2, Carlton Draught Peter Young Stakes (1800m), the final race of the day on Caulfield’s Saturday program in Melbourne.

Fresh from a Magic Millions campaign in Queensland where the 4-year-old mare claimed two very valuable events in the space of a week, Paradee stepped in to standard weight-for-age company and proceeded to complete a hat-trick of successes.

Afforded a copybook ride by Johnny Allen, Paradee raced on the shoulder of long-time leader Homesman (USA) (by War Front) as soon as the contest settled into a rhythm and was always traveling like the potential winner thereafter.

Asked for her winning effort soon after turning for home, Paradee quickly mastered Homesman (USA) but then had to dig deep to hold off a host of strong finishes, most notably that of Shared Ambition (Ire) (Born to Sea) careering into second place.

To his very great credit, Homesman (USA) surged again over the closing stages — when appearing to be a beaten force halfway down the straight — to claim the minor placing. 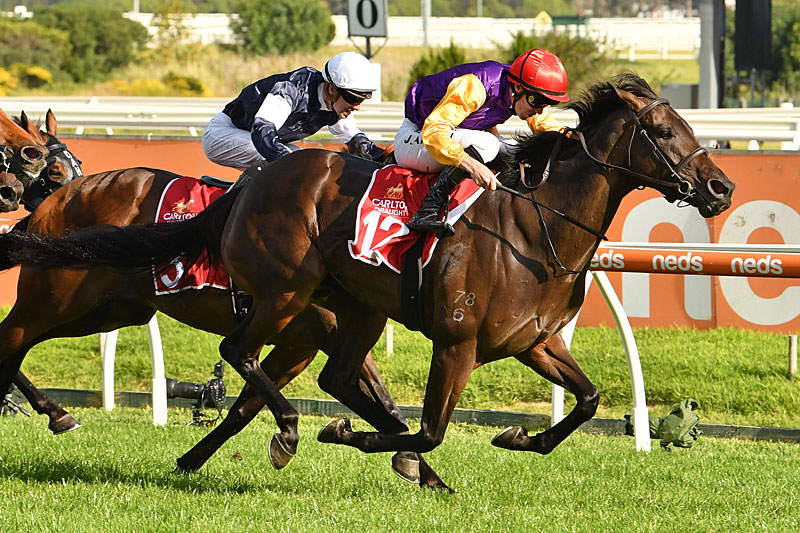 Paradee and John Allen are the best of the field, picture Quentinjlang.com

Speaking after his outstanding winning ride, Johnny Allen observed: “She’s a race-fit mare. There were a few in the race that were first-up, so I just didn’t want to get dictated to … [in] a slowly run race. She was good and strong to the line.

“She just traveled well around the corner and I waited for as long as I could … She might have been waiting for them there in front because I think that she half picked up again.

“She’s a good, honest mare and Danny and his team have her in great form.”

Speaking on behalf of his boss, Danny O’Brien stable representative Ben Gleeson said: “She’s had a wonderful preparation. To go up to Queensland and win two races on the bounce, and then come back here after a big prep all the way through the spring … I don’t think she’s missed a place the whole prep.

“She went down to Barwon Heads [after Queensland] and had a gallop down there a week-and-a-half ago, and just jumped out of the ground … we thought she’s going as well as ever, if not improved more, and that just shows by winning a good race and beating some decent horses.

“If she had won this race, which she has, we were thinking of the Australian Cup. It’s a race that’s profiling okay for her and if she bounces out of this run, as she has for the past couple of months, there is no reason why we shouldn’t go there.”

Paradee scored by three-quarters of a length, with a short half-head separating Shared Ambition in second and Homesman in third. Significantly, the first eight horses across the line finished within two lengths of each other.

Raced by Mr RM Anderson, Paradee took her earnings to $873,896 after 15 career starts, six of which have been victories. Her previous wins before today included the Group 3 Moonee Valley Dynamic Print Alexandra Stakes (1600m).