If only everyone - or every horse - was as honest as King Arthur.

Trainers would fret less, sleep more and owners would be reasonably sure of a cheque come Monday morning - so important when paying the bills.

The jockey would be confident the horse will be giving his all and in this case of King Arthur on the Polytrack, give him (or her) a big show of punching in another winner. 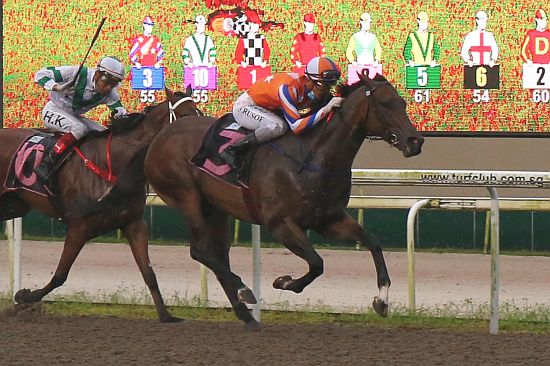 In fact, the four-year-old Australian-bred gelding has only missed a place once in some 11 starts on the Polytrack and that record on the all-weather surface also includes his five career wins, two over 1000m.

So, when the handicaps came out on Monday for the bumper 12-race card on Sunday, King Arthur’s nomination for the $70,000 Class 3 race over 1000m on the Polytrack put a spring in the step of faithful followers.

And he may not have a bigger fan than his trainer, Donna Logan.

“He’s a beauty and so honest it’s hard not to make him a favourite in the stable,” said Logan from trackwork on the morning of Hari Raya Puasa.

“His race record speaks for itself – especially on the Polytrack – and while he has some weights to carry against some good horses this Sunday, 1000m suits and he will give his all.”

With the 59kg at the Class 3 handicap conditions, Logan will give apprentice jockey Yusoff Fadzli and his 3kgs-claim another chance, after the Malaysian rider missed a place on the I Am Invincible bay, only two starts back.

“And we know King Arthur will be giving his all and whatever the result on Sunday, he will improve again for the run.”

Logan also thinks a recent two-week “holiday” with husband Peter Woods to see family for the first time in almost three years, will do her stable the world of good.

“We hadn’t seen the kids for a long time but we weren’t alone in that regard and it (the COVID-19 situation) was tough on everyone,” continued Logan.

“To be honest, we weren’t rushing home at first but Peter’s mother was unwell so we took the opportunity to head back, see the family and have a break from the day-to-day running of the stable.

“But while we had wonderful time and it was great to be back in New Zealand with family - we really needed that - we were both excited to land in Singapore and get back to work, which is a good sign in my opinion.”

Although it was another stable favourite in Axel (Jerlyn Seow) and Silent Is Gold (Ronnie Stewart) that gave Logan her two winners last weekend, it was Minister (A’Isisuhairi Kasim, better known as “Harry”) – when finishing fourth in the Class 1 event over 1400m - that gave the proud Kiwi handler the most to look forward to.

“Wasn’t he huge!” enthused Logan, who now sits sixth on the trainers’ premiership in 2022.

“He’s older - it takes him a lot longer to wind up - but once Harry got him going, he was doing better than anyone else at the finish.”

Coincidently, but a fact certainly not lost on Logan, Minister’s last (and best) win was in the Kranji Mile last year when ridden by A’Isisuhairi, also after finishing fourth at his previous start in Class 1 company.

Can history repeat itself on May 21?

“He’s not the same horse as last year - Harry will have to get him going earlier than usual - but he’s proven in weight-for-age company and you know he will give his best.”

And like King Arthur this Sunday, that’s all you can ask of a horse and trainer.