Charlie Hills said tactics will be different on Battaash in the King's Stand Stakes this year as he looked forward to unleashing two hot favourites in 40 minutes on the opening day of Royal Ascot. 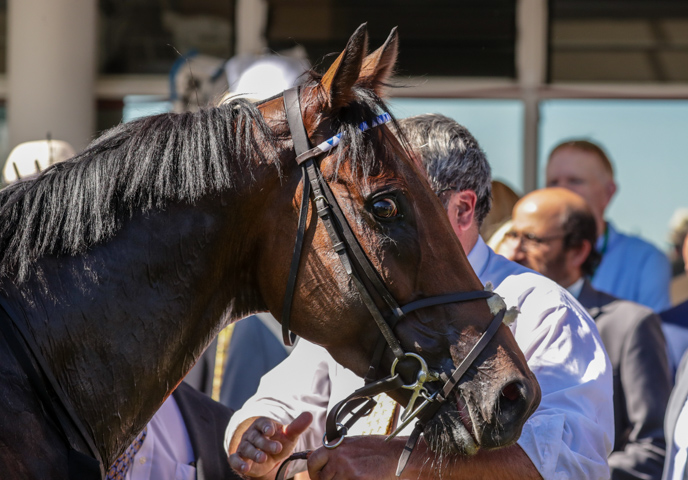 Phoenix Of Spain has emerged in rude health from his Irish 2,000 Guineas triumph and lines up in the St James's Palace Stakes straight after explosive sprinter Battaash, who Hills described as one of the best horses around, has renewed rivalry with last year's conqueror Blue Point.

The general 2-1 favourite for the 5f Group 1, Battaash ended 2018 rated 3lb superior to Blue Point, but was collared by Godolpin's classy sprinter in last year's King's Stand after racing keenly under Jim Crowley.

Many think Ascot's stiff finish could once more be against the son of Dark Angel, who made a pleasing return to action in Haydock's Temple Stakes last month, but Hills does not share that view.

"The Royal Ascot team is coming together quite nicely and I've been delighted with how Battaash has come out of the Temple," he said on Sunday.

"He's in a good place at the moment and I can't see the stiff finish being a problem.

"We'll probably ride him a bit differently from last year. He pinged the gates last year and was always up there, and Ascot is a very hard place to make the running. You're always there to be shot at.

"He's behaving better every day and has been as good as gold. He seems to be enjoying his work at the moment and is doing it with his ears pricked every time."

Palace House Stakes runner-up Equilateral, a horse Hills has always adored, is as short as 12-1 for the King's Stand, but may not join his brilliant stablemate in Berkshire.

The trainer will consult Teddy Grimthorpe, racing manager to Equilateral's owner-breeder Khalid Abdullah, in the coming days and said: "We've got the Coral Charge at Sandown in a few weeks, which we could wait for. He did a bit of work yesterday and I was happy enough with him, but he had three quite quick races in the spring, so we'll have a chat and make a final decision."

Phoenix Of Spain is inked in for the royal meeting and a crack at the St James's Palace Stakes on Tuesday week for which he is a top-priced 7-4 chance.

"He took his trip to Ireland well and looks great for having that race," added the three-time Royal Ascot winner.

"He's nice and fresh and did a swinging canter yesterday and will have one more bit of work next week. I don't think we need to make the running, but it depends on the draw and how many runners there'll be.

"I hope he'll only get better. He's a big scopey horse and what he did last year was just a bonus."

Hills won the inaugural running of the Commonwealth Cup with the outstanding Muhaarar and relies this year on Khaadem, last seen winning the Listed Carnarvon Stakes at Newbury on Lockinge day.

"We've gone the softer approach with him, so it's quite hard to weigh up the form with some of the others," the Lambourn ace said of his 10-1 hope.

"He's only ever going to do enough and probably won't look impressive because of that. He's very laid back at home and I couldn't be more pleased with how he looks, he's an absolute picture of health, so I'm really looking forward to running him."
Jamie Spencer, who will ride Phoenix Of Spain, has been profitable to follow at Ascot the last five years (+£70.57 to a £10 stake) and has had at least one winner at the royal meeting in 14 of the last 18 years

Royal Ascot is, in Hills's words, the best week of the year and he continued: "Last year we had fancied horses and no winners so it doesn't mean a lot, but it's great to go in there with some live chances.

"It's hard to say what my best chance is and for any of them to win would be great, but I think, if we get everything right, Battaash is one of the best horses around."

Of his other notable contenders, Hills said: "I think Vanbrugh's got a very good chance in the Wokingham.

"I don't think he stayed seven furlongs last time, but the form's worked out well with John Quinn's horse Safe Voyage winning the John of Gaunt on Saturday.

"He's got solid claims and I think fast ground is fine for him and the track will suit, while Flippa The Strippa should also run well wherever she goes."