Hartnell (GB) has given his all

Among all the sentiment, stories and statistics that will accompany Hartnell (GB) into retirement at Flemington on Saturday, one certainty will endure: that he put everything he had into every race he ran.

Whether Hartnell turns the $2m, Group 1 Mackinnon Stakes (2000m) into a glorious finale to a great career will not really matter said the Godolphin stable on Thursday.

As Godolphin Managing Director in Australia Vin Cox said in a note sent this week to every member of his team: “Win or lose, this champion has given us all so much. He has nothing to prove on Saturday, but we all know he will give his all.“

“We are all so lucky to have had an association with this great horse and he is a true inspiration to everyone at Godolphin.”

Cox also announced that Hartnell will be cared for by Godolphin for the rest of his days.

“It has been decided that Hartnell will be the flag bearer for the Godolphin Lifetime Care program and remain in Godolphin’s ownership,” Cox told the team.

And the best of the very good care he receives will come from Reg Fleming, for so long Bart Cummings’ No.1 man in Melbourne, now Godolphin’s senior foreman at Carbine Lodge - and Hartnell’s most devoted fan.

Hartnell will join the former Cummings-trained performers Precedence and Sirmione, and the Godolphin runner Moher under Fleming’s care.

For the record, the Mackinnon will be Hartnell’s 34th Group 1 race and his 58th in all, he will be looking for a 14th win that would be his fifth at the top level and he will undoubtedly add to more than $7 million in racetrack earnings. 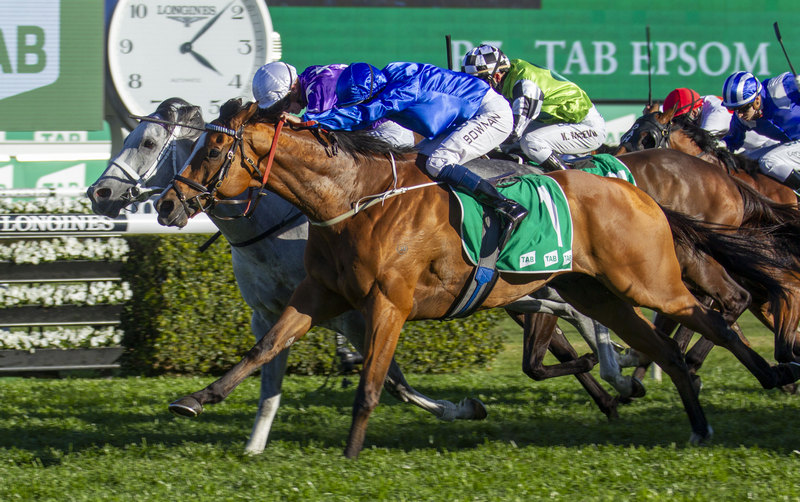 Hartnell has been the constantly shining star of Godolphin’s Australian team since he arrived at the Sydney stable in October 2014.

At times he threatened to establish himself as the best horse in training, and he might have if not for Winx.

In his spring campaign of 2016, he opened up with a second placing to the world champion in the G2 Warwick Stakes.

In succession, he then won the G2 Chelmsford Stakes by eight lengths, the G2 Hill Stakes by six and the G1 Turnbull Stakes by 3-1/4 from Jameka who at her next start won the G1 Caulfield Cup.
With hopes high he went to the Cox Plate three weeks later for another crack at the mare. He tried to take the initiative before the turn, it didn’t work and Winx beat him by eight.

But Hartnell still found a way to distinguish himself, fighting it out to finish second when an honourable fifth would have been fair enough.

At his next start he did something similar to finish third in the Melbourne Cup.

Hartnell has earned renown throughout Godolphin’s global operation and a lofty place among his owner Sheikh Mohammed’s galaxy of champions.

Cox puts that into context, pointing out that the Maktoum family has raced more than 5200 individual horses since 1992 and none of them has won more Stakes races than Hartnell.

“He will retire as one of the most superior WFA horses to ever race for Godolphin anywhere in the world,” Cox said.

Johnston had also trained Hartnell’s dam, Debonnaire, who along with his sire Authorized, not only supplied a fine set of genes but the inspiration for his name which is attributed to fashion designer Norman Hartnell, the authorised dressmaker to the Queen.

The first of Hartnell’s three juvenile wins came at his third start in a 1600m 2YO Maiden at Ffos Las in Wales in September, 2013.

Hartnell’s first G1 attempt resulted in a third placing in the Criterium De St Cloud in France and he won twice more in England in a Listed 3200m race at Royal Ascot and a G3 at Newmarket.

Hartnell arrived in Australia in October 2014 just after stablemate Contributer, and the pair got straight into it.

Contributer won the first race in which they ran, the G1 Chipping Norton Stakes. Hartnell finished second and at his next two starts won the G3 Sky High Stakes and the G1 BMW Stakes.

That opening campaign established a pattern from which Hartnell rarely strayed.

The Epsom performance prompted a tribute from trainer James Cummings that said it all.

"I just really can’t believe it, but you’ve got to have belief in this horse, and he’s a super horse, Hartnell," Cummings said.

It is Cummings who will send Hartnell out for his final race on Saturday with a mixture of hope, confidence and admiration.

“He’s come up every prep for us, he’s been an absolutely amazing horse,” he said.

“He’s perhaps the most accomplished weight-for-age horse Godolphin has ever raced in Australia and he’s an absolute credit to himself.”

Saturday will be the last time we see a true Champion#FollowYourHart #Hartnell pic.twitter.com/3QHN9LHAcf