Hall at the double

David Hall snared an early race-to-race double at Sha Tin on Sunday to take his season tally to three wins from only eight runners - the equal-lowest amount of entered runners by any trainer since the 2020/21 season commenced. 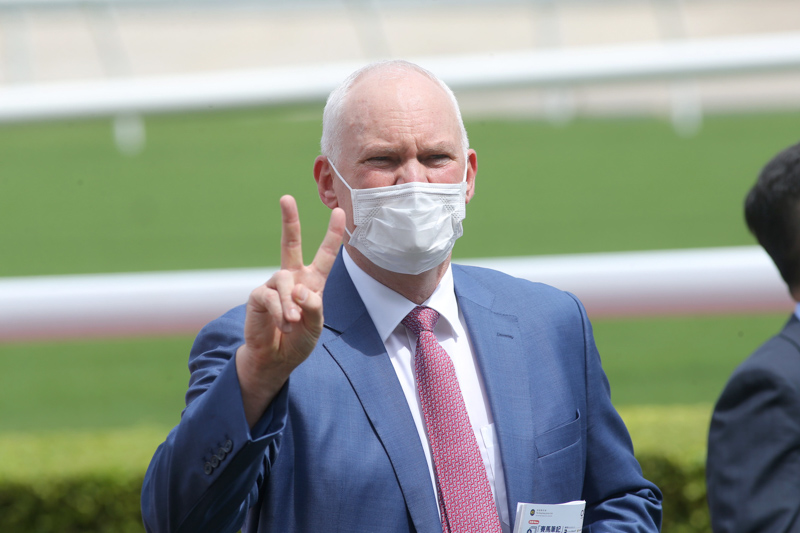 “Bundle Of Energy was an obvious one to run early, he was in hot form at the end of the season without winning, so he was always going to line up early,” Hall said.

The 24-start maiden ended an exasperating run of outs which spanned across three seasons after making his Hong Kong debut in May, 2018.

The trainer completed his quick-fire double with Eight Trigrams, who claimed the first section of the Class 4 Mong Kok Handicap (1200m).

“Eight Trigrams also, he really struck that good trial and good win on the dirt so I targeted him early regardless of whether we had a holiday or whether we had the break from training, those two horses certainly would have been there.

“I think it’s just about having the right horses for the right races at the time. I don’t think I can dwell too much on the COVID-19 period and the extended training sessions,” Hall said.

The Magnus gelding grabbed the third win of his career and second on the dirt but will now move up to Class 3 following that win as a 59-rater.

“You don’t get surprised when you see them trial like he did, he trialled extremely well on the dirt and that’s why we ran him there last season, it was always the plan – I knew there would be an early race on the dirt for him in the new season, so we targeted it,” Hall said.

Chad Schofield got off the mark for the 2020/21 season, partnering the Richard Gibson-trained Gold Chest to a weaving victory in the Class 2 Ho Man Tin Handicap (1000m).

“I thought his trial the other day on the dirt was very good, albeit a very quiet one. We drew on the right side, had a perfect race and we followed the favourite everywhere and maybe got out 50 metres too early but to his credit he dug deep and fought off the fast-finisher,” Schofield said.

“Richard’s (Gibson) been a very good supporter of mine since I came to Hong Kong and this season, we’re only right at the beginning but he’s been giving me good support as usual - so I’m always happy to ride a winner for him,” Schofield said.

Last season’s champion trainer Ricky Yiu got off the mark for the new campaign as Winwin Thirtythree grabbed his first Hong Kong win at his 19th try, getting the win under Frenchman Antoine Hamelin.