Simon Kok Wei Hoong became only the second apprentice jockey to add his name to the Singapore Gold Cup (run at Kranji*) roll of honour after he steered Big Hearted to a stirring win in the handicap showpiece on Saturday.

Two-time Singapore champion apprentice jockey Shafiq Rizuan was the first to pull off the feat when he won the third and most prestigious Leg of the Singapore Triple Crown series aboard Cooptado in 2015, then sponsored by Longines.

Shafiq went on to win his second title that year, and likewise, Kok is all but home in his bid to make it back-to-back after being crowned Singapore champion apprentice jockey last year. 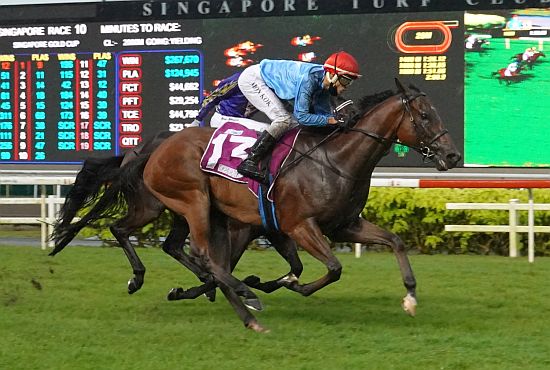 The Ipoh-born equestrian-trained 25-year-old rider was struggling to contain his excitement as the realisation of having come up trumps in the $1 million Group 1 race over 2000m was taking a while to dawn on him.

“As soon as I passed the winning post, I knew I had won my first Gold Cup, my first Group 1 race. So many emotions ran through my body, it’s unbelievable,” said Kok.

“It hasn’t quite sunk in yet. But one big thing about winning such a race is to do it when I’m down to only one-kilo claim.

“I’d like to thank my boss Steven Burridge first of all, for letting me take this ride, Michael Clements (Big Hearted’s trainer) for giving me the ride, Chopsy (assistant-trainer Michael White) who rang me for the ride, and the owners (Falcon Racing No 7 Stable) of course.

“They trusted me and I’m glad I was able to get the job done. I won on him in a Class 4 race over 1200m (January 4) and I knew already he would have a big future here.”

Armed with that handy lowdown, Kok walked into the parade ring with a certain level of confidence on the $42 chance, and while the first third of the race was a little tentative, he was soon overcome with a strong hunch that Class 4 win was about to be minted into gold.

From barrier No 14, Kok originally snagged the Hallowed Crown four-year-old back to the fence, plotting the same path as Kranji Mile winner Aramaayo (Ruan Maia) who had drawn the widest in 16.

But not 100% happy with the ground traction on the soggy inner part of a track that had been pelted with rain all day, Kok decided to switch to the less chopped up part on the outside, getting onto the back of his better-fancied stablemate and topweight (57kgs) Top Knight (Vlad Duric), but still in a rearward berth.

When Top Knight took off from the 800m, xeroxing the blueprint of his Group 1 Queen Elizabeth II Cup (second Leg) success three weeks earlier, Kok latched on, and suddenly, the two light blue (Big Hearted in the second colours with the red cap to differentiate) silks of the champion Thai owner were on the prowl – almost in tandem, with Top Knight in the driving seat and towing his stable companion right behind.

Pacesetter Yulong Edition (Marc Lerner) swung for home as the lamplighter but was clearly running on fumes. Elite Incredible (Joseph See), who enjoyed an economical rails-hugging run in his slipstream from the start, drew first blood upon straightening, but it was another runner close to the speed, Minister (Ryan Munger), who was laying down the law with the strongest might at the 300m mark.

At that point, Minister had the vote for back-to-back Singapore Gold Cups for his trainer Lee Freedman after Mr Clint (who never put in a blow this year) last year, but Clements’ formidable duo were gobbling him up with every stride.

With only 50kgs on his back, Big Hearted just had that edge on Top Knight. He was the first to overpower Minister, and even if the Falcon pair nearly crossed paths close home, the ‘second stringer’ continued on his merry way to score by half-a-length.

Probably anchored down by his weight in the concluding stages, Top Knight just lacked that killer instinct this time, weakening to concede second place to Minister by 1 ¾ lengths. The winning time was 2min 3.9secs for the 2000m on the Short Course on a track rated as yielding.

“From the wide barrier, I had to make a decision wherever he lands. Eventually, we settled at the back,” said Kok.

“Around the first bend, we were on the inside of Top Knight, but my horse was not travelling that well. So I peeled him out to cruise up behind Top Knight and he was then travelling good underneath me.

“I know he has a good finish, and when we passed Minister in the last 200m, I was confident I would win. He wanted to lay in, but I still had plenty underneath me.

“In that type of going, he just kept going strongly to the line.”

Clements admitted he thought Top Knight was still his leading hope (he also saddled a third runner in longshot Vittoria Perfetta who was ridden by Saifudin Ismail) in spite of the sterner handicap conditions, but Big Hearted’s featherweight did sway him more than once.

“I’ve been leaning towards Top Knight all along, even if I knew he was always going to be vulnerable. He won weight-for-age races against horses like Mr Clint and Aramaayo at level weights, but it was his first time in a handicap race against the same horses,” said the Zimbabwean-born conditioner.

“Once the rain came, I was even more confident, even if Big Hearted also won on rain-affected tracks. In the end, they both ran very well, but the pull in weights favoured Big Hearted.

“Top Knight lost no marks, he did not disappoint, but what is even more gratifying with Big Hearted is that I bought him as a yearling for the owner at the Inglis Melbourne sale.

“He cost A$120,000 and to see a yearling come all the way through and win a Singapore Gold Cup is an immense source of satisfaction. It’s been a great progress taking him from 1400m to the mile, then 1800m and now 2000m.

“From the outside draw, I told Simon to try and get cover and not to be too far back. I was a bit concerned he was so far back but once he made ground around the bend, I knew he would be in the finish.

“Coming on the outside was the right move. On that rain-affected track, the outside is that much smoother, not as churned up.

“The leading horse (Minister) was quite far in front, but my two horses were making a lot of ground. Simon did come across a little but that didn’t affect the result as Top Knight was not pulling any ground off Big Hearted then.

“As for Vittoria Perfetta, he finished midfield (10th) but he stumbled out of the barriers and lost ground. The race was over for him there and then as he’s a horse who needs to be on the pace.

“I can’t thank my staff and the owners enough for the support. It’s all about teamwork and we’re also doing well on the premiership, fingers crossed we can win that, too.”

Clements, who is nine winners clear of defending champion Mark Walker (52 against 43 winners) and is on the cusp of a first title after 22 years spent in Singapore since moving from Zimbabwe, praised Kok for his heady ride, and let in he wanted no other rider shortly after Big Hearted won at his last start in a Class 3 race over 1800m with Maia up three weeks ago.

“We asked Simon to take the ride straight after his last win, and it was confirmed right away,” he said.

“Simon had a great season last year. This year, with the disruptions, he’s done okay and has picked up since, but that Gold Cup win will definitely be a big lift for him.”

Having now stretched his lead to 13 winners on Hakim Kamaruddin (32 winners versus 19 winners), Kok is all but home for a second consecutive gong in the apprentice jockey title fight, but the humble young man was still not counting his chickens.

“I’ve said it before, but I don’t think about the premiership. My focus is to win as many races as possible and just keep learning,” said Kok, whose previous only other feature race win came with Star Emperor (now known as Exceed Natural) in the Group 3 Jumbo Jet Trophy (1400m) last year.

With that sixth win as well as three placings from 12 starts, Big Hearted has racked up more than $790,000 in prizemoney for the Falcon Racing No 7 Stable.