It’s been a long time coming, but Manoel Nunes was finally able to boot home his 500th Kranji winner with Good Fight in the $20,000 Open Maiden race (1200m) on Saturday.

After coming within sniffing distance, the milestone had been put on the backburner for nearly four years after the three-time Singapore champion jockey’s licence was not renewed in 2018, but amazingly, he flashed through only three meetings into his new tenure to knock in the four winners he needed.

The Brazilian ace had been stuck at 495 winners since December 2017, and was able to edge closer to 496 with one win on Limited Edition at a pitstop visit in September 2019. 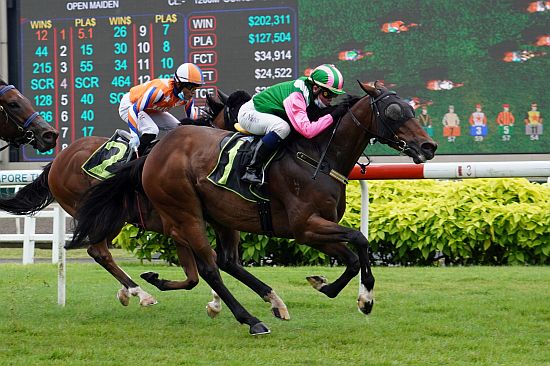 When he was granted a six-month licence in June, he was first and foremost excited to return to his old stomping ground, but the “unfinished business” of the tonne landmark was also uppermost on his to-do list.

But because of the much longer permit procedures due to even tighter COVID-19-restricted red tape, Nunes was left with only the last remaining month of November to finally get his new stint underway, but it didn’t matter - he clearly was a man in a hurry.

In one fell swoop, Bizar Wins at his first day back, followed by a double on Singapore Gold Cup day with the Tim Fitzsimmons pair of Resurgence and Thunder, allayed any fitness concerns (he has not race-ridden since December 2019 when he was crowned Mauritius champion jockey) he might need all of the four meetings to hit top gear.

With a book of 10 rides and top chances galore on Saturday, Nunes was odds-on to put that coveted target behind him without having to wait for the ultimate meeting next Saturday - and he duly crossed that line at only his second ride with the aptly-named Good Fight.

“It’s not easy to win 500 races anywhere in the world, especially in Singapore,” said Nunes.

“The last four years I rode here were very tough. I can’t mention everybody, but I had Joao Moreira in my first year, which already set the tone.

“Then there were jockeys like Michael Rodd, Alan Munro, Danny Beasley, who’s still here and riding so well. Then came the Glen Boss, Gerald Mosse, Vlad Duric, it was very competitive.

“I’m very pleased, more so when I have been frustrated I couldn’t ride in the last couple of years. It’s a hard job, I had to do a lot of exercise, but I was worried about my fitness, worried about the next meeting if there’d be enough time to get 100% well.

“But it’s worked out well, I cannot ask for more. Support is very important and I’m very grateful to all the owners and trainers who have supported me.

From his solid booking, Nunes, who is at 1,940 wins amassed during a globetrotting career, could not have predicted Good Fight would be the one to turn milestone provider, but did get a pleasant inkling at a first sit over the week.

“I did gallop that horse on Tuesday. Donna (Logan) told me he was a straightforward horse and to have a good feel of him,” he said.

“When I came back, I told her he did nothing wrong, and today, she left it to me, but hopefully he can settle behind the leader in second or third place.

“There was a horse on my inside (City Hall), but then Mark Walker’s horse (Our Final Offer) came chasing on my outside, but I just wanted to get my timing right.

“Once I popped him out, he put in quite a good run. He’s still learning what racing is all about.

“It’s good for the owner who is from Hong Kong. We need owners like him to support Singapore racing.”

Thanks to a smart jump, the Super One three-year-old, who was sent out the $12 favourite, was parked into a prominent spot outside City Hall (Zyrul Nor Azman) with Our Final Offer (Hakim Kamaruddin) whipping around to make a line of three.

Upon cornering for the judge, City Hall dropped off, but Our Final Offer wouldn’t give up as meekly as he put up a stiff resistance. Under Nunes’ urgings, though, Good Fight wore him down with every hop to get three-quarter length in front where it mattered.

Holy Eleanor (Marc Lerner) picked up another bridesmaid tag by blousing Our Final Offer out of second place by a neck. The winning time was 1min 11.93secs for the 1200m on the Short Course.

Logan said she had homed in on Nunes for the ride on Good Fight, while totally unaware the happy results would lead to the surprisingly jubilant first reaction from the hoop as he jumped off.

“Manoel looked so happy after the win, he told me he’d just won his 500th race in Singapore! I had no idea, and I’m glad I was part of that,” said the Kiwi handler, who with Jerome Tan were the only two Kranji-based trainers who didn’t know Nunes as she moved from New Zealand in early 2018, and Tan from Malaysia the following year.

“I thought Manoel would suit the horse as he’s a good on-pace rider, and he’s hungry. We had all been wondering if he’d get his full fitness level in the short time left, but he’s proven us otherwise in no time.

“So, I rang him up thinking he’d be gone, but surprisingly, he had no ride. He’s proven his ability over the years in Singapore, he’s a top rider and we knew he’d be more than capable of delivering on this horse.”

“The owner is from Hong Kong but lives in Singapore. He has horses all over New Zealand, but also in Australia and England,” said Logan.

“You will see his name pop up all over the place very soon. Mark and I told him to bring some more horses here!

“This (Good Fight) is a horse he bought himself, or maybe bred, as I know he breeds some of his horses, too.

“The horse has benefitted from a break. He’s come back fresh and he was up in weight by 13 kilos, which proves that he had strengthened up, but he’s still work in progress.

“Mentally, he was not quite switched on, he’s still very green, and still has a bit to learn, which is not a bad thing, though. I think 1400m would be his best distance one day.”

With that breakthrough win, Good Fight has taken his stakes earnings close to the $19,000 mark for Mr Kwok.

Intrepid was already Nunes’ third win for third-season trainer Fitzsimmons, a sign of what may well become a powerful combination to reckon with next year.