Typically understated, Ho is not budging from the routine which has yielded 19 triumphs from 20 starts aboard Francis Lui’s superstar, who returns to competition for the first time since his memorable triumph in the G1 LONGINES Hong Kong Mile (1600m) on 12 December at Sha Tin.

“He’s been working well. I’m looking forward to it. It’s another small field,” Ho said. “At the age of six, I think he’s better than even before — mentally and physically.

“He’s more mature. I wouldn’t say he’s changed a lot, but after the summer he’s got a bit bigger. Mentally, he’s more mature. He knows what to do in the mornings and in the races.” 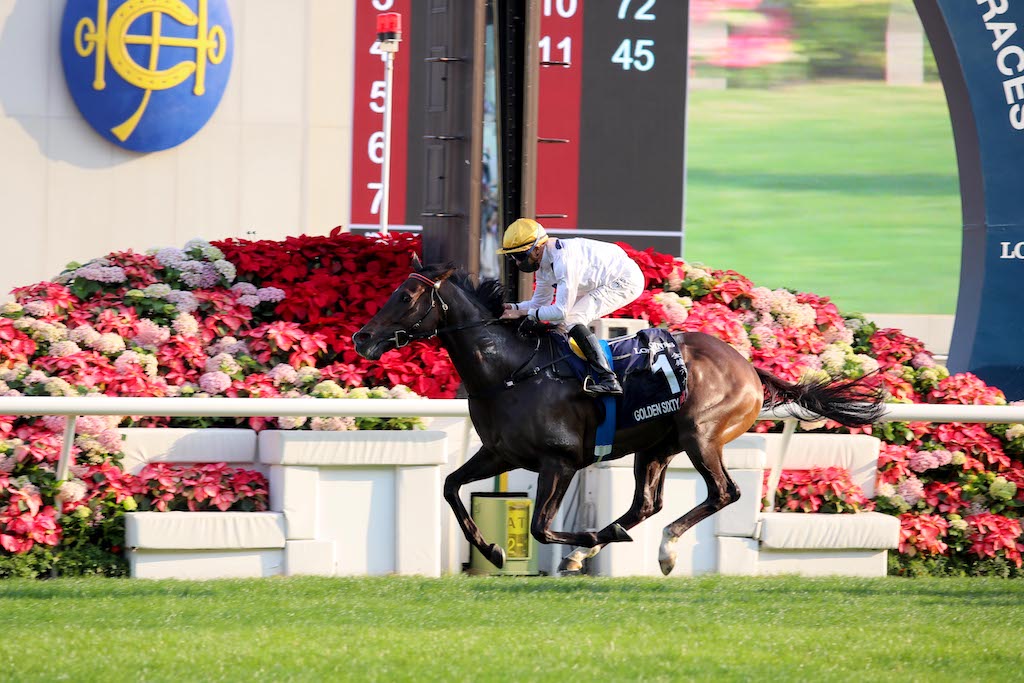 Golden Sixty will be the focus of everyone's attention again this Sunday, picture HKJC

Fending off the notion of any distraction ahead of Golden Sixty’s bid to emulate Silent Witness’ dynastic sprint dominance between 2002-05, Ho deadpanned: “There’s no record in my mind at the moment, just focusing on the race.”

Referring to the closed-door mode at Sha Tin this weekend and the absence of all but essential staff because of concerns of Omicron, Ho said: “No matter what, he’ll get his job done. It is what it is, hopefully the fans can return soon.”

Golden Sixty tuned up with an untested third in a 1000m trial down the Sha Tin straight on 4 January behind fellow G1 winner Wellington, pleasing Ho with his application. “We just made sure he had a good stretch out and that he feels happy,” Ho said. “He’s all done for this week. He’s ready to race.”

Third behind Sunday’s rival Sky Field in the interference-marred LONGINES Hong Kong Sprint (1200m) at Sha Tin on 12 December, Courier Wonder is ready to contend again, according to Moreira.

“He’s improving and getting better every day and I’d be very surprised if he’s not up there, finishing amongst the top three. I know he’s not the favourite, and he’s kind of disappointed some people recently, but I’m not too disappointed, honestly, myself,” the Brazilian said.

“He’s run some big and strong races and just got to hope that he does a little bit better this time because if he does, he might be right there with them fighting for the win.”

Leading the jockeys’ championship by 12 from arch-rival Zac Purton with 65 victories so far, Moreira takes the ride on Tony Cruz’s Jumbo Fortune in the Class 3 Aerovelocity Handicap (1200m).

Trained by Michael, Wayne and John Hawkes in Australia when known as Saif, the Pride Of Dubai gelding hasn’t raced since prevailing at G3 level over 1400m at Rosehill Racecourse in April, 2021, but he recently produced an eye-catching trial at Sha Tin, splitting Wellington and Golden Sixty over 1000m on 4 January.

“With what he’s done on his trials, it gives me a lot of confidence,” Moreira said. “He seems to be very straightforward. I’d be very surprised if doesn’t go well in Hong Kong.

“He’s got a lot of speed. He trialled against some really decent horses. That proves to me that he’s got ability otherwise he wouldn’t be able to finish side by side with some of the best horses in Hong Kong.

“He has that gate speed that Hong Kong requires. He’s quite solid and strong and the weight is not going to bother him.”