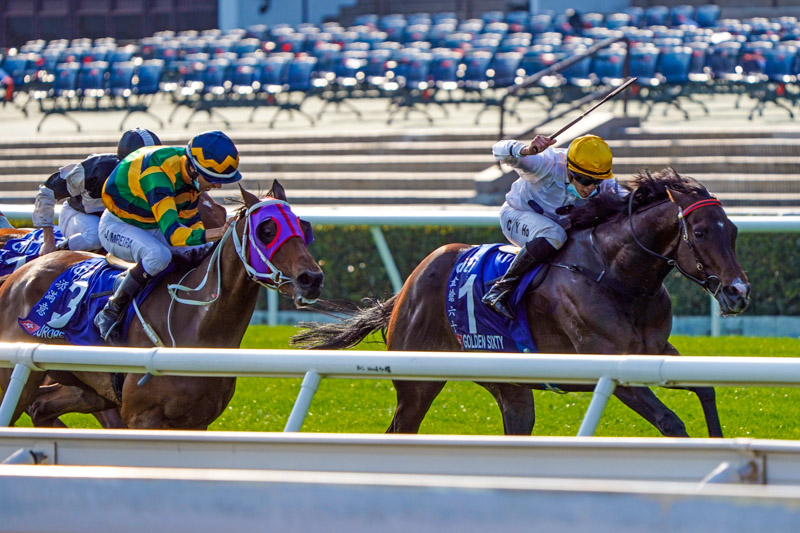 However, Hong Kong’s highest rated horse was forced to spare no effort as he scrambled to add a third consecutive Group 1 to his glittering record which now stands at 16 wins from 17 starts, four shy of Silent Witness’ record 17 consecutive wins.

Dropped out to his customary position at the rear of the field, the Medaglia d’Oro gelding began his surge in the straight but the challenge from Furore on the inside required jockey Vincent Ho to call on everything that Golden Sixty could give and, it proved just enough in a time of 2m 0.25s by a short head, the smallest margin of any of his wins.

“I was quite confident that I would stay ahead of them but we fought hard - it wasn’t easy, it was a bit unexpected to be that close.

“I was just worried about the horse to the inside of him because Golden Sixty laid in a bit, he would have won easier if he didn’t do that,” Ho said.

“Once he went past Exultant he wanted to lay in - it made it difficult for me but it’s still a victory,” the 30-year-old added.

Today’s win was both a first in the Gold Cup for trainer Francis Lui and jockey Vincent Ho.

“I think you can’t really change the horse’s character - when he passed the third horse (Exultant), Golden Sixty thinks he has finished the job, but there’s another horse on the inside,” Lui said.

The 131-rater is now only two wins shy of Beauty Generation’s single-season record of eight and, he has the first two legs of Hong Kong’s Triple Crown in the bag after claiming last month’s G1 Stewards’ Cup (1600m).

“I will think about the third leg of the Triple Crown, we also have a race in April in mind,” Lui said referencing FWD Champions Day.

The third and final leg of the Triple Crown is the G1 Standard Chartered Champions & Chater Cup (2400m) on 23 May and, if successful stepping up to 12 furlongs in three months’ time, he could become the second horse after River Verdon in the 1993/94 racing season to win the Triple Crown.

Horse of the Year Exultant battled into third place under Zac Purton, while Glorious Dragon sealed fourth under Matthew Poon behind him, the second of the Lui-trained runners.

After notching his 1,300th Hong Kong win with Waikuku in the G1 Queen’s Silver Jubilee Cup (1400m), 11-time champion trainer John Size moved to 1,301 wins as Tempest Express claimed the nightcap, the Class 3 Werther Handicap (1400m), a victory that edged to him outright top spot on the trainers’ championship standings.

Tony Piccone’s daring front-running tactics paid off aboard the Chris So-trained Pakistan Friend, clinging on for a narrow success in the Class 4 Super Kid Handicap (1800m) after opening up a lead of close to 15 lengths down the back straight.

Derek Leung continued his solid form of late with victory for Paul O’Sullivan aboard Vukan in the Class 4 California Memory Handicap (1400m).