Only the narrowest of noses split Golden Power and Chamjoeun Chingu at the end of the Luna Stakes last month and at Busan Racecourse on Sunday afternoon the fillies meet again in the second leg of their Triple Crown as ten go to post in the Korean Oaks (1800M KOR-G2).

Six of the ten come out of that Luna Stakes, the first leg of the filly Triple Crown which took place over a mile at Busan on April 10th, and they filled out the top six places. In that race, Raon The Spurt was sent off as the favourite and she led a long way before ultimately been passed by long-time stalker Chamjoeun Chingu. However, Golden Power and Choi Si-dae would emerge from the field to nail both on the line.

It was a superb late effort and gives every indication that Golden Power, who went wide and made up fully twenty-lengths in the home straight over fillies who didn’t exactly stop running themselves, can only benefit from the additional furlong.

Chamjoeun Chingu though draws much better this time and with Moon Se-young aboard again, will have plenty of backers to maintain Seoul-trained horses excellent recent record in the race; the Trophy has headed to the Capital four times in the last five years. Raon The Spurt too remains a live contender.

The locally trained Golden Power is not the only hope for the host track. Trainer Kim Young-kwan has prepared no fewer than five Oaks winners and this year sends out Wonderful Raise. She is an on-pace filly who ran a super race in the Luna for 4th and just like Chamjoeun Chingu, draws a much better barrier this time around. 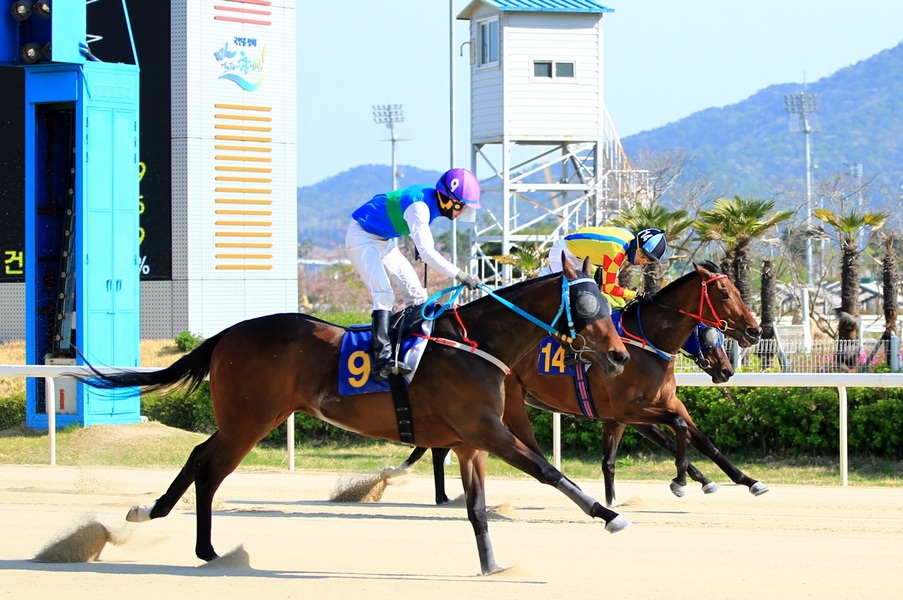 1.  WONDERFUL RAISE [Menifee – On The Podium (Bold Executive)] – A fast winner at class 5 level over 1400M in February, she drew gate thirteen in the Luna Stakes and ran a creditable 4th. Every chance of coming on for that run, her trainer has won the race five times and it would be no surprise to see her in the finish.

2. MAGIC GRACE [Magic Dancer – Ua Deungseon (Menifee)] – A winner up to class 4 level in Seoul and of three from seven in total. She is yet to go further than 1400M but as an on-pace type she draws well to give herself the best possible chance. Not a top line favourite but a case can be made for some minor money.

3. SHY DRAGON [Menifee – Monday’s Child (Stravinsky)] – Likely to be one of the longest shots on the board, she takes her chance following a good win at class 5 level in an all-filly race over 1200M on March 18th when she sat midfield and ran on well. Yet to run further than 1200M and this is a big step up.

4. CHAMJOEUN CHINGU [Musket Man – Googlette (Exceed And Excel)] – A winner over 1700M at class 4 level in Seoul before losing out in the final stride to Golden Power in the Luna Stakes. That day she had to contend with gate fourteen but gets a much more favourable draw here and should get a much easier run. She has a big chance.

5. GOLDEN POWER [Afleet Express – Cherokee Sheikh (Cherokee Run)] – The Luna Stakes winner, she came from the back of the field to the front in the home straight and just made it on the line by the narrowest of noses. She is yet to go beyond a mile, but she was traveling by far the quickest at the end of the Luna and she has every chance of winning again. Probable favourite.

6. EUNSEONG WINNER [Menifee – Achimsarang (Broken Vow)] – Her solitary win came at class 6 level over 1300M in early March, making all. That led her to take her chance in the Luna and whilst sent off one of the longest shots on the board, she ran a solid 6th. She can settle midfield here and while she doesn’t look a winning chance, she should see out the trip and can aim for some minor money.

7. LUCKY CROWN [Girolamo – Peregian (Grand Lodge)] – Her only win came at class 6 level over 1200M and she as 7th of ten in the Sports Seoul Classic trial. Nevertheless, she took her chance in the Luna and only winner Golden Power posted a faster final furlong time as she came from the back of the field to run on for 5th. On the face of it, the additional trip can suit and don’t rule her out of passing some tired fillies again.

8. ADELE GOLD [Girolamo – Gold Mine (Officer)] – She comes in having picked up her maiden win last time out at what was start number six over 1300M hen she sat handy to midfield and finished off well, scoring easily. This is a big step up in both class and distance and despite the top jockey booking, she will be an outsider.

9. ALPHA SONGDANG [Old Fashioned – Miss Win (Perfect Vision II)] – The wildcard. Since running 3rd on debut at 1000M, she has registered two wins up to 1200M at class 5 level. She has been on pace in all her races so far and while this is a totally different test, she may be interesting and a probable big price. Jockey Kim Hye-sun is the only female rider to have won a Classic in Korea, taking this race on Jejui Haneul in 2017.

10. RAON THE SPURT [Musket Man – Tomiken Spring (Suzuka Mambo)] – She won three of her first four starts before coming up short at this distance at class 3 level at Seoul in February. That didn’t stop her from being sent off as favourite for the Luna, a race she led but ultimately finished 3rd, half a length behind the winner. She is not favoured by the draw as she likes to lead, but she has plenty of quality and if she can find a forward position, she can be in the finish again. Jockey won the race in 2020.