A switch to frontrunning tactics paid instant dividends for outsider Golden Flame in the $70,000 Stepitup 2015 Stakes, a Class 3 race over the turf mile at Kranji on Saturday.

The only time the Mossman seven-year-old scored in such a positive style at his five previous wins was early doors during his time under the care of trainer Young Keah Yong.

It was around three years ago at his maiden Kranji win third-up when under Benny Woodworth’s guidance, he took a 1000m race (a Class 4 Non Premier, a grade which has now been scrapped) by the scruff of the neck from barrier rise for an uncontested lead that kept widening towards more than three lengths at the wire. 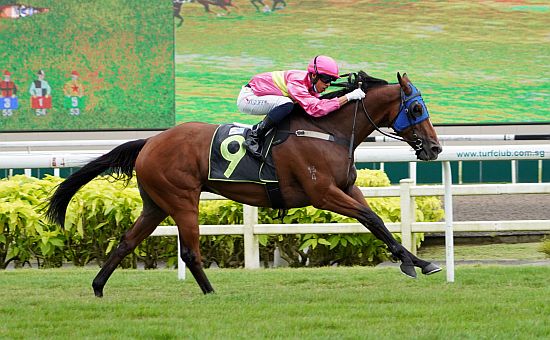 Now trained by Donna Logan (since his fifth start) for whom he won his remaining four races from off the speed, Golden Flame ($83) showed on Saturday he had not forgotten how to win from the front.

Logan’s apprentice jockey Yusoff Fadzli can certainly take some of the credit from the cool and composed handling in beating barrier No 9 to grab the lead before rating the race to the minute from thereon in.

Rambo (Wong Chin Chuen) loomed with a stiff challenge in the home straight, but Yusoff had not flexed a muscle yet. Once the Malaysian rider got stuck into Golden Flame for his final charge, there was still a sprint left in him, and it soon dawned on his rivals that any attempt to cut back the margin would prove futile.

Two lengths separated him from Rambo, who finished ahead of Trumpy (Oscar Chavez) by another length. The winning time was 1min 35secs for the 1600m on the Short Course.

“The speed was not overly strong, so I told Yusoff to jump him out and let him roll instead of getting stuck three to four wide,” said Logan.

“My only worry was the step-up to 1600m when it’s been 24 days between runs, but credit to Yusoff who rated him perfectly.

“At the top of the straight, I knew he’d be hard to beat as he was travelling so well. I thought Dan’s (Meagher) horse (Rambo) would challenge him, but he peaked on his run, and there wasn’t much else coming up from behind.

“It’s great for the owners (Golden Billion Stable). That’s their only horse with me, but they’ve been fantastic clients from Day 1 and are just so genuine.”

The Singaporean outfit may not have literally made a billion dollars with Golden Flame, but the $246,000 in prizemoney that their precious charge has earned, not to mention the thrill from his six wins and 12 placings from 36 starts, must have certainly made them feel that way.