James Cummings says this weekend will be critical in determining which horse claims Godolphin’s Everest slot with a trio of three-year-olds high on their list. Golden Rose favourite Anamoe, Heritage Stakes contender Paulele and Ingratiating are all under strong consideration to represent them in the $15 million sprint.

Seasoned campaigner Trekking, who tackles the Moir Stakes at The Valley on Friday night, also remains in the mix for a third attempt at the Everest having finished fourth to Classique Legend 12 months ago and third behind Yes Yes Yes a year earlier. 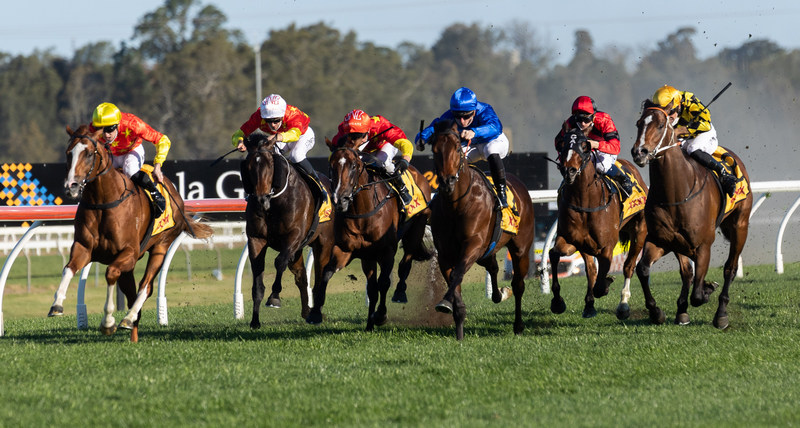 Godolphin's Anamoe has the Golden Rose to tackle first before anything further is decided, sportpix.com.au

Both Anamoe and Paulele will launch their bids at Rosehill on Saturday, while Ingratiating will run a week later in the Danehill Stakes in Melbourne.

“There’s a bit to play out in that sphere,” Cummings said on RadioTAB on Thursday. “Among those four horses, I think our runner will come from that squad and we’ll get through the next two weekends before we make our minds up.”

Star colt Anamoe can make a concerted bid for Godolphin’s Everest spot in Saturday’s Golden Rose (1400m). After placing in the Blue Diamond and Golden Slipper as a juvenile, he rounded out his two-year-old season with a thumping win in the Group 1 ATC Sires’ Produce Stakes over the Golden Rose distance.

Cummings says Saturday’s performance will be crucial in determining which path Anamoe takes and whether he sticks to sprints or extends in journey to the mile of a Caulfield Guineas.

“There’s a bit of classic style about this colt and for that reason, the Caulfield Guineas is right up there high on his agenda,” Cummings said. “But there are other big carrots dangling there, so there’s a bit for us to consider and that’s what makes this race so important.”

Anamoe is an odds-on favourite for the Golden Rose and Cummings cannot fault the colt. After recovering from a virus to win first-up, the son of Street Boss (USA) is expected to derive good improvement from that hit-out and will have the services of champion jockey James McDonald.

“Anamoe has had a really straightforward fortnight. He absorbed that run in The Run To The Rose beautifully,” Cummings said. “It sets up well for him to be going to another level second-up in the Golden Rose up to 1400 metres.”

Paulele is also fancied as a $2.80 favourite for his assignment in the Heritage Stakes (1100m).