Godolphin's trainer James Cummings comments on the stable's runners at The Star Doncaster Mile meeting at Randwick on Saturday.

PAULELE (AUS) – 2YO Colt by Dawn Approach (IRE) out of Chatoyant (AUS)
James Cummings - Damien Oliver, 56.5kgs, Barrier: 5
“He’ll enjoy dropping back to 1,100m after his defeat at Flemington over seven furlongs. I say that because I think this is a very fast horse.”
“Anyone with a form guide in their hands will work out that he is one-from-one from the Randwick chute.”
“This race is like a daycare for future Australian sprinting stars.”

FLEXIBLE (AUS) – 3YO Filly by Hallowed Crown (AUS) out of Dextrous (AUS)
James Cummings - Tommy Berry, 57kgs, Barrier: 6
“She’s likely to strike a soft track which should be suitable.”
“She motored home late against older horses at her last start.”
“The 2,000m on Saturday will be a litmus test for her to follow in the footsteps of her similarly bred stablemate Colette in last year’s autumn carnival.”

ANAMOE (AUS) – 2YO Colt by Street Boss (USA) out of Anamato (AUS)
James Cummings, Jockey – James McDonald, 56.5kgs, Barrier: 5
“Brilliance, speed and determination were stamped all over his Blue Diamond and Golden Slipper performances.”
“While the wide barrier condemned him to an impossible position at Rosehill, his run was that of a colt crying out for further. He produced one of the runs of the day.”
“He is a very athletic colt and we have always felt he would get stronger with racing. The 1,400m of the AJC Sires’ Produce appears tailor-made.”

BIVOUAC (AUS) – 4YO Colt by Exceed And Excel (AUS) out of Dazzler (AUS)
James Cummings, Jockey – Hugh Bowman, 58.5kgs, Barrier: 2
“Three of his memorable, scintillating performances have come third-up from a spell and his Easter weekend trackwork suggests a jaw-dropping effort is on the cards. We simply couldn’t have him any better.”
“Circumstances haven’t been ideal in his two runs this campaign, but the TJ Smith has been his bulls-eye.”
“Physically he seems perfect. His attitude and demeanour show he is in a terrific frame of mind. Victory here in this autumn grand final would book this Australian equine jet a ticket to take on the world at Royal Ascot.”

AVILIUS (GB) – 7YO Gelding by Pivotal (GB) out of Alessandria (GB)
James Cummings, Jockey – James McDonald, 56kgs, Barrier: 12
“He takes on this time-honoured mile after two outstanding efforts in the Chipping Norton and George Ryder, affirmed Doncaster form races.”
“An expected soft track will not be his to enjoy exclusively but he does savour a bit of mush.”
“He is such a noble, honest horse and gives his best every time. Victory would not go undeserved.”

BEST OF DAYS (GB) – 7YO Gelding by Azamour (IRE) out of Baisse (GB)
James Cummings, Jockey – Ms Rachel King, 52.5kgs, Barrier: 15
“This year this fellow has given his best every day. He is resilient, brave, competitive and honest as the days are long.”
“He has won or placed at four of his last five starts including a nose defeat in the G1 Australian Cup (WFA).”
“He invariably performs well off a freshen-up, he likes Randwick and the predicted soft conditions are not detrimental to his chances.”

CASCADIAN (GB) – 6YO Gelding by New Approach (IRE) out of Falls of Lora (IRE)
James Cummings, Jockey – Ms Jamie Kah, 53kgs, Barrier: 3
“He comes into the race on cue and the opposition might be queuing up behind him. He drops 6kgs from the G1 George Ryder when he cut loose, late and wide, to beat all but the placegetters.”
“His trackwork since has been impressive and with average luck in running, he will be charging at the line like a runaway renegade.”

GEIST (AUS) – 3YO Filly by Medaglia d'Oro (USA) out of Wraith (AUS)
James Cummings - Ms Rachel King, 54kgs, Barrier: 16
“Her record isn’t a fair reflection of her ability.”
“Her first five starts were in black-type races and she was placed in two of them.”
“She’s not a small filly, rather robust actually, but she’s got a motor with grunt.” 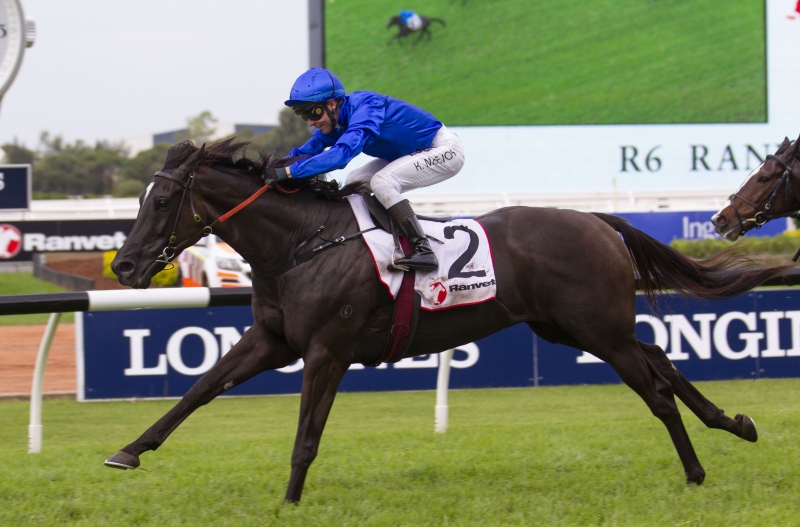