The 2018 Flying Start graduation ceremony took place in the Cape Cross centre at Kildangan Stud in Ireland on the afternoon of Friday, July 6th.

Invited guests included the parents of the graduating class, Godolphin management and thoroughbred industry leaders who have supported the Flying Start trainees throughout their two years on the programme.

MC and Godolphin Flying Start graduate of 2017 Alayna Cullen opened proceedings by warmly welcoming guests and trainees’ families from as far away as Arizona and New Zealand. She looked back on her own experiences of the program given she had only graduated 12 months previously on the very same stage.

Alayna then called on Godolphin Ireland Managing Director, Joe Osborne, to speak. He described how each graduate should always try their very best given the education received and his message to the trainees for the future was to “work like bees to support the hive”.

Clodagh Kavanagh was then called to the stage for an interview with Alayna. She spoke about how Sheikh Mohammed had the vision to create Flying Start and the fact that there were now 165 graduates of the program. She complimented her team of coordinators who work to implement Flying Start. She described the increased emphasis on innovation, technology and creativity as part of the course content in the past year.

Clodagh also spoke about gender diversity and inclusion in the industry, explaining that it makes good business sense to have women represented at board and management level, and that 30% representation is needed for them to have an impact. She explained that Flying Start will continue to run Professional Development conferences for the alumni network all over the world with the next event planned for Sydney on September 28th. Clodagh congratulated the class of trainees on some of their sporting, community and thoroughbred initiatives achieved during the two year program.

Moreover, the School’s programmes are consistently ranked highly, as they are the only Business School in Ireland ranked in the Financial Times rankings of Business Schools. She said the most critical signal of quality is the quality of the graduates, the nature of the impact they make on the organisations they work for, the organisations they create and the wider world around them. He encouraged the graduating class to develop a passion for contribution, for hard work and for life-long learning and development. Raomal thanked Clodagh Kavanagh for her commitment to the program and to working with UCD.

Godolphin Ireland and Godolphin Flying Start Director Joe Osborne was then called back to the stage to present the Diplomas to the 13 trainees. Six of the graduating class received a Distinction award and Jack Carlino from Phoenix, Arizona received a huge round of applause as the top trainee of 2018.

New graduates Christopher Farrell and Megan Hebbert then thanked the guests, Godolphin Flying Start management and His Highness Sheikh Mohammed of behalf of their class mates before calling Clodagh Kavanagh, Joe Osborne and Martin Larkin to the stage to receive gifts from the class. Will Freedman surprised and delighted the assembled crowd with a song penned in recognition of the course and his classmates which led to a standing ovation. Guests were then invited to Kildangan House for a celebration lunch.


The thirteen trainees who graduated on July 6th commence roles with the following employers this month: 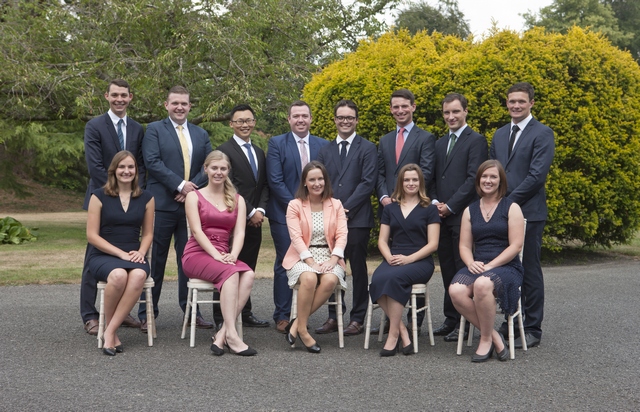