Glorious Forever keeps a record in the family, Moreira and Purton up the ante

On a day when Joao Moreira and Zac Purton delivered a masterclass at Sha Tin on Sunday to illuminate an already intriguing fight for the Hong Kong jockeys’ premiership, Glorious Forever (126lb) stole a bright shaft of the spotlight with a triumph of Group 1 potential.

The Archipenko gelding produced a display that exuded grit, lung-straining stamina and, above all, exciting quality, to win the afternoon’s feature, the Class 2 Hoi Ha Handicap. In doing so, the four-year-old clocked 1m 59.53s and became only the second victorious horse in history to dip below two minutes over 2000m at the track. Glorious Forever snipped 0.44 seconds off the mark his own-brother Time Warp set when taking the G1 Citi Hong Kong Gold Cup back in February.

“That performance today was particularly good, he’s broken the track record and there was a lot to like about it,” said Purton, who was also aboard Time Warp for his record-setting score.

Runner-up Insayshable (128lb) set the tempo under a determined Moreira, but John Size’s charge was unable to match Glorious Forever’s relentless stretch drive. The 1.6 favourite galloped away to a two and a quarter-length verdict, while bottom-weight General Sherman (115lb) kept on for third.

Trainer Frankie Lor, second in the trainers’ table and approaching the final two meetings of his debut season with 63 wins on the board thanks to a treble today, was daring to look ahead to Group 1 targets next term. 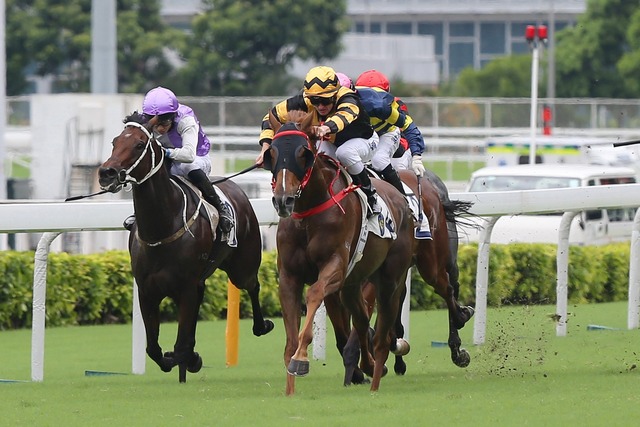 But Lor and Purton both know that to reach those heights Glorious Forever, for all of his apparent talent, still has some learning to do and progress to make.

“He did a lot wrong today,” Purton said. “He basically over-raced for the entirety of the race; he wanted to throw his head around a little bit and get on with it, which is not a good sign. Frankie putting the blinkers on has brought out the best in him, but if a horse can't adapt to being behind other runners and become one-dimensional then they make it hard for themselves.”

“He sat behind the other horse but suddenly he was a bit keen, so maybe there will be improvement as he develops and matures next season,” he said. “At 2000 metres, in future, I think we might look at using some other gear, maybe a visor, we will see.”

Glorious Forever backed up an impressive four-length win last start to make it two from four in Hong Kong, having nailed two wins from eight starts in England when trained by Ed Walker.

“When he came to my stable he was a bit skinny after the journey and didn’t look impressive. We galloped him and gave him some trials and he looked better when he trialled. Then, when I put the blinkers on in the trial, he found improvement,” Lor said.