Golden Rose day has proven a frustrating one for champion jockey James McDonald but he has bounced back with a Gloaming Stakes victory aboard Head Of State (American Pharoah (USA)).

McDonald went into the meeting with rides on a handful of the leading fancies, including odds-on Golden Rose favourite Anamoe. But he came away from the first eight races empty-handed, having to settle for placings aboard Paulele in the Heritage Stakes, Entriviere in the Golden Pendant and Anamoe in the feature. 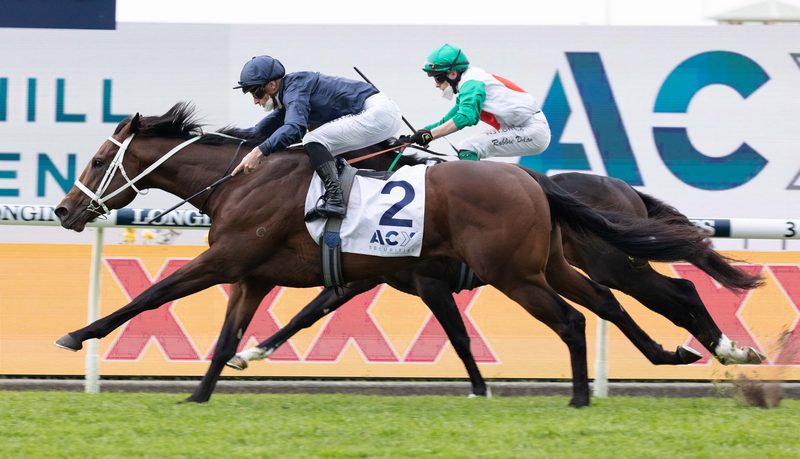 Head Of State collars Profondo in the Gloaming, picture sportpix.com.au

The top jockey didn’t let it get to him, turning around his fortunes when he produced Head Of State ($5.60) with a late surge down the outside to round up $4.60 favourite Profondo (by Deep Impact) and claim the Group 3 Gloaming Stakes (1800m) by a neck.

McDonald rated it a terrific performance, especially given it had been hard to make ground on the firm track.

“There’s still more to come. He loves that ground,” McDonald said. “A huge effort against the bias.”

Profondo ducked back to the fence and may have cost himself victory, his effort at just his second start auguring well for his future. The pair cleared out from the rest, with $21 chance Benaud (by Reliable Man) third, another 3-3/4 lengths back.

Head Of State is by champion American Pharaoh (USA) and trainer Chris Waller is convinced he can make his mark as a stallion if his progeny is given time to mature. The three-year-old will have his next start in the Group 1 Spring Champion Stakes (2000m) at Randwick in two weeks.

“That’s the plan. We thought he would take good progress from today’s run in two weeks’ time,” Waller said.

“Obviously, the second horse was very good and he’ll have a bit of improvement to come. I love the way they gapped the rest.”