FWD Champions Day at Sha Tin Racecourse on Sunday, 25 April will bring together the very best of Hong Kong’s elite gallopers and a top-line contingent from Japan in three Group 1 races.

A total of 29 talented horses from both Hong Kong and Japan, including nine individual G1 winners, have been selected to compete in the three races worth HK$63 million.

Mr. Andrew Harding, Executive Director, Racing, at the Hong Kong Jockey Club, said: “It is very exciting to see that the 2021 edition of FWD Champions Day will provide such thrilling sporting action, with the best of Hong Kong lining up against a top-line contingent of Japanese raiders. We started work in January to once again overcome the myriad challenges from the global pandemic and stage a day of world-class sport, including some international participation consistent with our core principles for managing COVID-19 risks and meeting all health precautionary requirements set by the HKSAR Government.”

Reigning Horse of the Year Exultant will meet Japan’s Daring Tact in a clash of old and young over the famed 2000m at Sha Tin in the G1 FWD QEII Cup. A seven-year-old now, the Irish-bred son of Teofilo, Exultant, will aim to capture his sixth win at the top-level and second FWD QEII Cup in succession. Against him, Japan’s sixth Fillies’ Triple Crown victor Daring Tact, who in turn bids to become the sixth Japanese winner of the FWD QEII Cup as she steps out onto international soil for the first time as a brilliant winner over 1600m, 2000m and 2400m in her home country.

Not least, she also finished third to super mare Almond Eye in the 2020 Japan Cup (2400m) and, fifth out of that race, Glory Vase, the 2019 G1 LONGINES Hong Kong Vase (2400m) hero will also feature, as well as Japanese Classic winner Loves Only You and the enigmatic Kiseki – a brazen son of 2012 QEII Cup winner Rulership.

Trainer Tony Cruz’s game veteran Exultant is one of nine selected for the 2000m feature, which includes six G1 winners in total and his presence is bolstered by the inclusion of stablemates Time Warp and Furore, the former is a two-time G1 Citi Hong Kong Gold Cup (2000m) winner while the latter reigned supreme in the 2019 BMW Hong Kong Derby (2000m).

While two legs of Hong Kong’s Triple Crown are in the bag and the third, the G1 Standard Chartered Champions & Chater Cup (2400m) is set for the end of May, the new pin-up boy of Hong Kong racing will in the meantime look to extend his record to 14 consecutive wins in the FWD Champions Mile, with a view to also winning his fourth G1 race in succession.

But there is no shortage of opposition to Francis Lui’s standout charge, with seven selected to run including last year’s winner of the race, Southern Legend, a consistent jetsetter who has two international successes to his name in Singapore and, was narrowly touched off by Golden Sixty three starts ago in the G1 Stewards’ Cup (1600m) by a head.

Danon Smash, winner of December’s G1 LONGINES Hong Kong Sprint (1200m) is aiming to add another top-level victory in Hong Kong to his growing resume when he contests the G1 Chairman’s Sprint Prize. His record, which now also features last month’s G1 Takamatsunomiya Kinen (1200m) at Chukyo Racecourse, is growing rapidly and he tops the billing for this month’s HK$18 million dash.

While Hong Kong’s representatives took a hit with the withdrawals of Hot King Prawn and Classique Legend, as well as the absence of Aethero, there is still no shortage of talent in the jurisdiction bidding to stop him. Jolly Banner, who finished second to Danon Smash in last year’s G1 LONGINES Hong Kong Sprint is entered, while Wellington, who clocked an equal Class 1 record to that of the legendary Sacred Kingdom also lines up.

Trainer Frankie Lor, who won this race last year with Mr Stunning, will be represented by a pair of talents, the G3-winning Big Party and Fat Turtle, fifth in last year’s G1 LONGINES Hong Kong Sprint.

Computer Patch, a G3 winner down the straight features, as does Sky Field and three supplementary entries, the first three across the line in the G2 Sprint Cup (1200m), Amazing Star, Stronger and Beauty Applause, respectively, rounding out the 13-runner field. 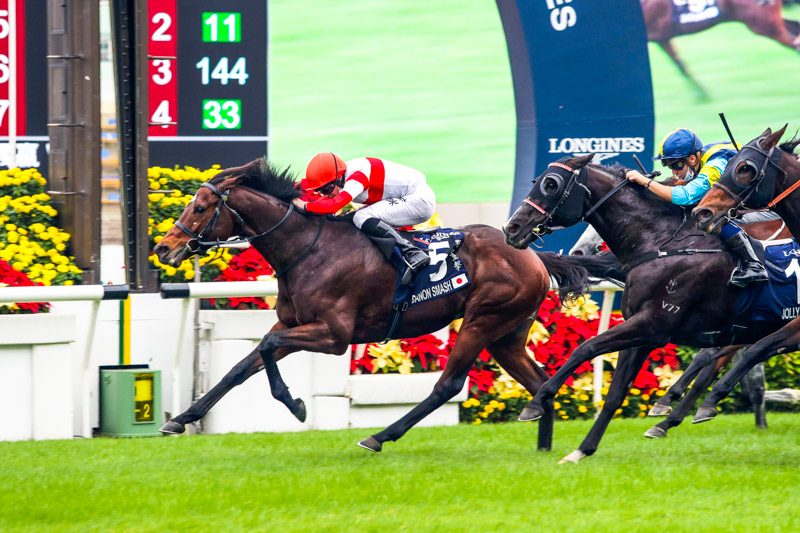