Frankie Lor roared to second in the trainers’ championship thanks to a treble at Happy Valley on Wednesday night that maintained his fruitful run of form.

The fourth-season handler made it eight wins so far in October when Heavenly Thought’s victory in the Class 3 Sha Wan Handicap (1650m) sealed the three-timer, propelling Lor to 11 wins for the term, four behind championship leader Caspar Fownes.

With 14 race meetings completed, Lor has more than doubled the five wins he had accrued at this time last year – a season that resulted in just 44 wins, 21 short of the 65 wins he posted in each of his first two seasons.

“It’s a little bit early to talk championship but I always try my best. First of all the horses are very important and they need to be healthy,” Lor said.

The 54-year-old has 74 race meetings still to navigate but he has his string in fine form and was quick to credit the Hong Kong Jockey Club’s Mainland training facility’s role in the preparation of his horses.

“I have over 20 horses in Conghua,” Lor said. “It depends, if the horse is a bit weak, or if he needs a freshen up, I will send him to Conghua.” 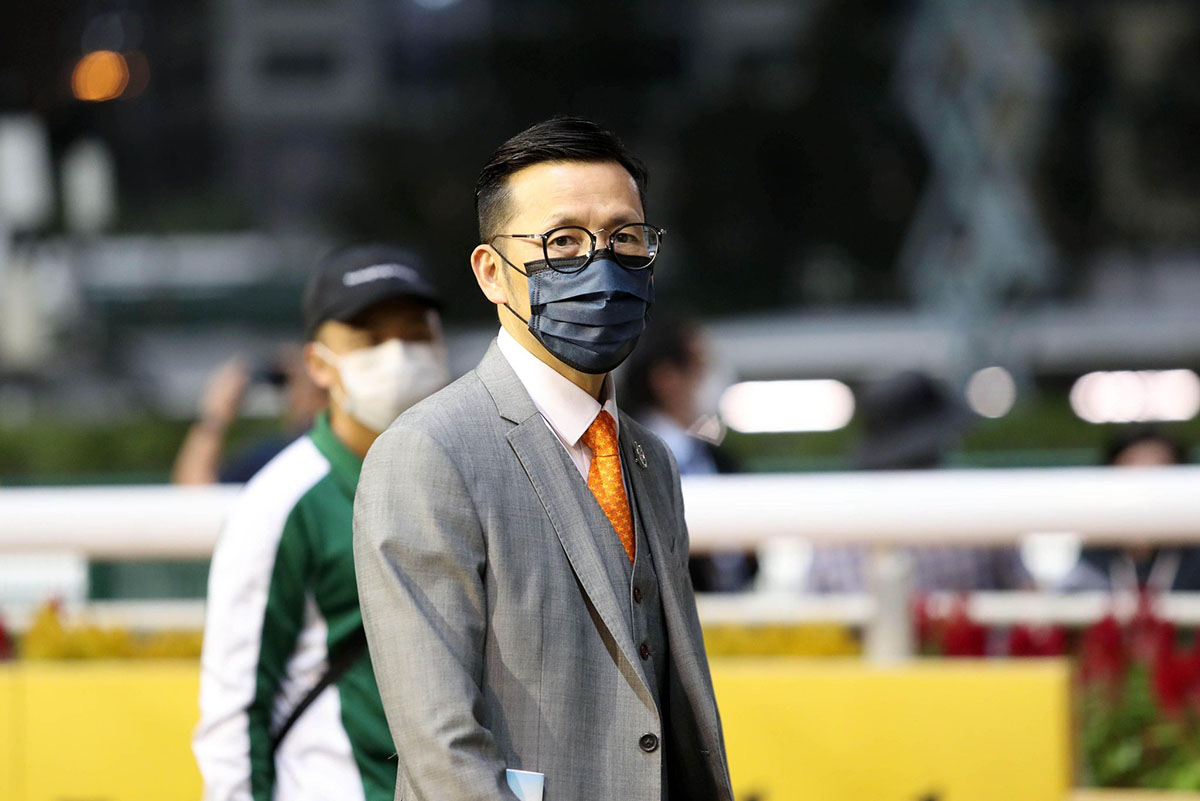 His treble-capping hero Heavenly Thought is one of those to have benefited. The Australian G1 runner-up shuttles to and from Conghua and is now a two-time winner on the cusp of Class 2 after being winless across his first 17 starts.

“He had a good draw which I think is really important for him - he followed the leader and got the job done,” Lor said.

The win also gave jockey Joao Moreira a treble, moving him six wins clear at the top of the table. The Brazilian ace has now achieved three or more wins on a single race day five times this season.

Lor and Moreira combined three races prior in the Class 4 Shek Pai Wan Handicap (1000m) with We The South, who registered an impressive make all success.

“We drew gate 11 so I told Joao (Moreira) that if he can lead then just lead by yourself, and if not, just sit behind the leader, so he did a good job to get the lead,” Lor said.

Moreira fired the gelding out of his wide berth and crossed to the front at the 900m mark. From there, he was able to control the tempo and record a one and a half-length win.

“He showed a lot of gate speed - he got in front and he had an easy time there so he was always going to finish off the race strongly,” Moreira said.

It wasn’t all smooth sailing though. Prior to the race, the nervous Your Song gelding dislodged Moreira in the Parade Ring, but the three-time champion jockey shook it off.

“He got scared of the other horses making noise so he tried to flip back and he sat down. I thought he was going to flip over me so I tried to get myself off,” Moreira said.

Earlier on the eight-race card, Moreira drove the John Size-trained Incanto Prepared to victory in the second section of the Class 4 Tin Wan Handicap (1650m) – an impressive rail-hugging steer to get the gelding his first Hong Kong win.

“When I got this horse I thought it would be easier to win in Class 5, but when I checked the horse he was a little bit weak and that’s maybe why it was not easy to win. I sent him to Conghua and he’s now got two seconds and one win this season. I think Conghua has been really good for him,” Lor said.

The Sebring gelding got off the mark at his 22nd Hong Kong start and the win took Badel’s seasonal tally to seven, with at least one win at each of the last three race meetings, including tonight. 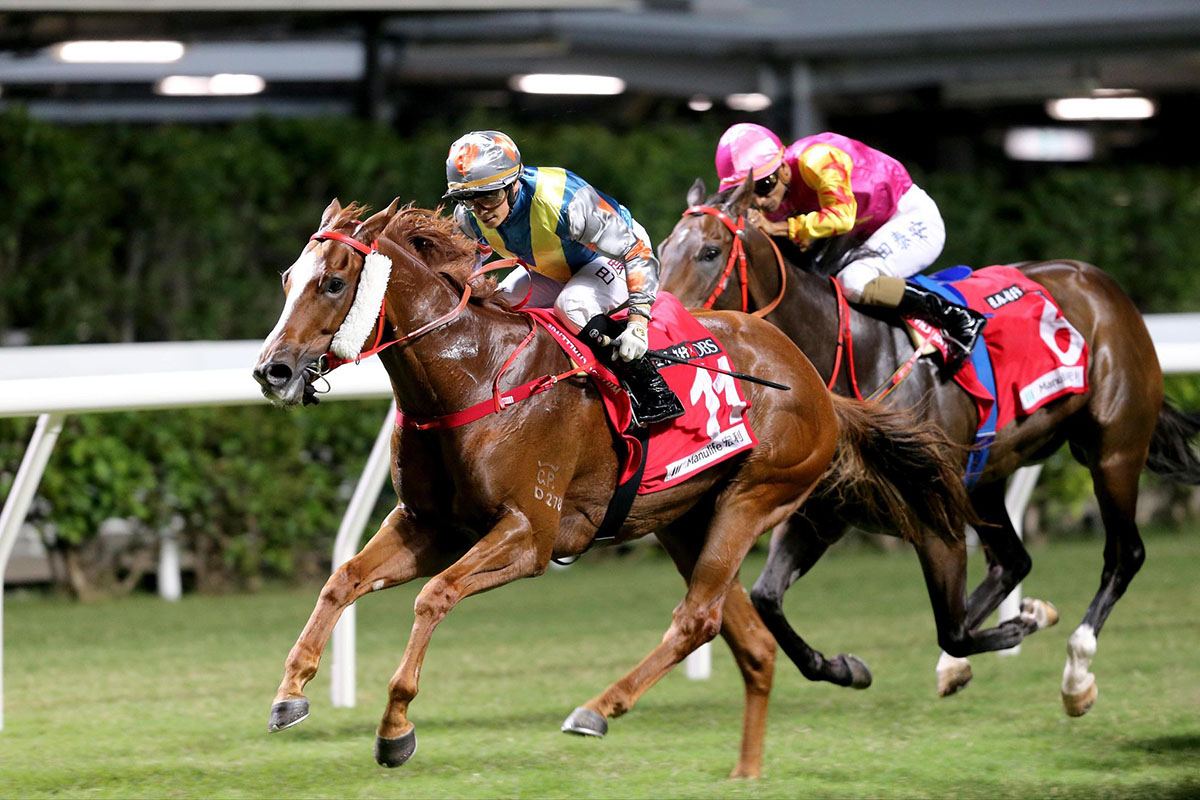 Badel secured a double with victory in the finale, the Class 3 Po Chong Wan Handicap (1200m) aboard the Danny Shum-trained Grateful Heart.

“He’s a nice horse,” Badel said. “I gave him a good warm up before the race and he flew from the gate, so I sat behind the leader and he settled well. He’s easy to ride and when I asked him to go, he picked up and fought well,”

That moved the in-form Frenchman to eight wins this season.

“I’ve had a lot of support – it was just about getting the momentum. Once you jump on the good ones and you’re a bit lucky with the draw then things are going even better,” Badel said.

Teetan rolls on with two

Karis Teetan kept on rolling with a double at Happy Valley tonight thanks to the barnstorming finish of Explosive Witness in the Class 3 Kong Sin Wan Handicap (1000m).

“I was a bit worried because he was letting down so much and I knew he was going to get up, but I could feel the line was coming close because it’s a short straight and halfway through the race he was only running into trouble,” Teetan said.

“He’s not an easy horse to ride because you have to get him to switch off and from the gate he didn’t break too well and I had to allow him to get comfortable. Once I balanced him up, he really let down strongly, I was lucky I got up but it was a good training performance from Caspar (Fownes).”

The Mauritian ace kicked off his double with his third victory aboard the Dennis Yip-trained Murray’s Partners in the first section of the Class 4 Tin Wan Handicap (1650m).

A rail-hugging drive from Neil Callan got the David Ferraris-trained Winning Feeling home in the opener, the Class 4 Shum Wan Handicap (1200m).