The Richard and Michael Freedman trained Forbidden Love under Tommy Berry led for most of trip in the $140,000, listed Tresemme Reginald Allen (1400m) for three-year-old fillies at Randwick on Saturday and held off all the challengers for her third and most important win.

The win was franked by Forbidden Love carrying top-weight of 59kg and it was due reward for her placings in the Group 2 Furious Stakes over 1200m behind Dame Giselle and in the listed Heritage Stakes over 1100m behind Wild Ruler. 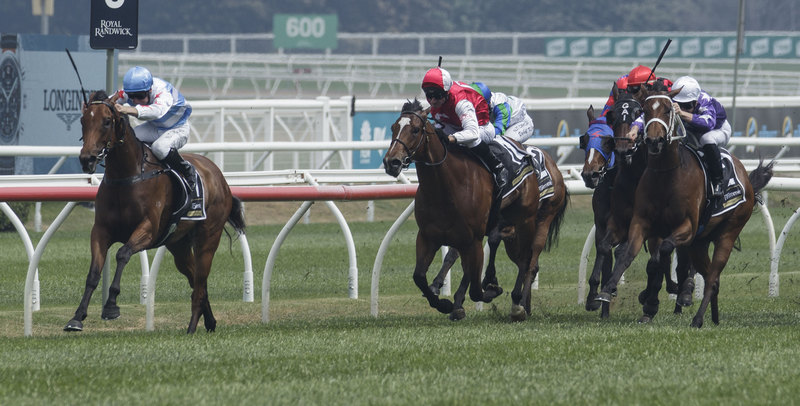 Forbidden Love and Tommy Berry out in front, picture Sportpix.com.au

“It was a good tough win particularly with the 59kg. She was there to be run down and probably into a bit of a head wind up the straight. A good tough win all round,” said Michael Freedman.

“It is really nice for everyone involved to get a black type win into her and onwards and upwards into the autumn.”

Of the rest Joviality (I Am Invincible) (58kg) and James McDonald came through for second with the $5.00 favourite Elizabeel (Power) (54kg) and Jason Collett third, the margins a neck and short head.

Forbidden Love is by All Too Hard out of the More Than Ready mare Juliet’s Princess and with three thirds to go with her wins she has earned stakes of $198,750 for her owners who include the Freedman’s and Ms S S Bromley, Mr D P Hassab, Mr D F Hore-Lacy, Mr A Krolikowski, Mr C C Pickford, Mr M D Shaw and Mr M D Skinner.