For 14 days, home is where the heart of Peters' stable is

James Peters has been training from his Singapore home in the last week or so.

No, the English trainer has not called in sick and neither has he joined the league of “armchair trainers” – plenty of those out there.

Peters is on a 14-day Stay Home Notice (SHN) after he returned from an English holiday (where he attended the Cheltenham races) on March 20. He and girlfriend Nicola were not able to beat the deadline of 11.59pm on 16 March set by the Singapore Ministry of Health for passengers flying in from Europe, if they were to avoid the SHN imposed because of the global Covid-19 outbreak. 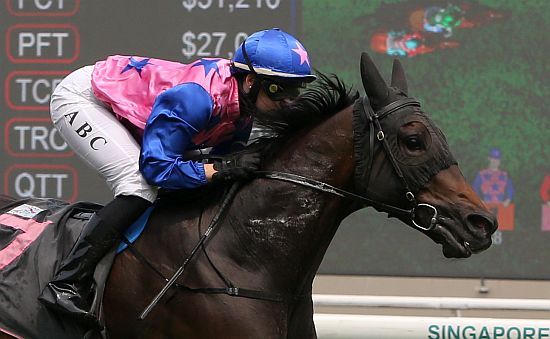 With no other choice but to toe the line, Peters has not set foot at Kranji, his stables or the races since he returned.

But he said it had been business as usual, even if not seeing his horses visually does impair his work. Peters has had to tweak his operations around three main items: Delegation, reliable staff and technology.

“Obviously, it’s not an ideal situation, I could write a book about the whole thing – holiday cut short, changing air tickets, applying for SHN, etc - but the most important thing is I’m well, and so is Nic,” he said.

“At the stables, it’s been business as usual as best as we could. The only thing which is different is I can’t see the horses, I have to rely on what Mick Lockett and Zairi Othman see and report to me.

“For example, if they see something and are not happy with the condition of a horse, say he is too heavy or too light, they will let me know and I then make a decision.

“With technology nowadays, they can send me videos and updates, which I also use to send to the owners.

“On Sunday, I will spend half-an-hour with Mickey going through the programme for the next meeting. We will get through the runners and work out what is going on, and again when the weights are out.

“I would say there is not much different, as there is already a routine in place. The training programme is already set, the horses are fit and are just kept ticking over.

“They know when the horses have to gallop. It’s not too difficult, especially when I have Mickey and Zairi as well as a good team to look after the horses.”

Peters will come out of self-isolation on Saturday, meaning he will miss another meeting this Friday where he has engaged five runners, of whom Skywalk and Black Jade are the highest rated. Arc Triumph, Ma Bao Bao and Overcoming are his other three runners.

After a smack-up third to My Dreamliner in a Kranji Stakes A race over 1100m on February 29, Skywalk, a New Zealand-bred six-year-old by Battle Paint, runs in the $100,000 Class 1 race over 1200m on Polytrack while Black Jade, an Irish-bred six-year-old by Dragon Pulse, contests the $85,000 Class 2 race over 1600m on Polytrack, and is first-up since his super second to Pennywise in the Group 3 Colonial Chief Stakes (1600m) in December.

“Skywalk trialled well the other day (second to Gingerella on March 26). Other than that 1400m race (Group 3 Fortune Bowl in January), which was a throw at the stumps, he has been consistent at his last four or five starts,” said Peters.

“He carries the top weight (after War Affair) and will have to give weight to those lower-rated horses, which is never easy, though, but I’m sure he’ll run well.

“As for Black Jade, I’m pretty pleased with him. His comeback was delayed but I’m happy with his trial (same as Skywalk) and he likes the Polytrack.

Peters, who has not saddled a winner since February 29 when Overcoming and Siam Warrior handed him a double, has booked Michael Rodd and Alysha Collett on Skywalk and Black Jade respectively.