Flak, Be Bee no 'has-beens' yet for Baertschiger

Shane Baertschiger has two evergreen members of his ‘Dad’s Army’ to thank for his training double at Kranji on Saturday.

While winners like South Of The River, Dancing Light, Mortal Engine or Super Atas and Lucky Jinsha were among the hungry bunch of young guns rising through the Kranji ranks, Flak Jacket at 11 and Be Bee, the ‘baby’ of the two Baertschigers at seven, share 15 seasons between them.

Don’t even talk about their last hurrahs. Be Bee last stung (for his sixth win) around three years ago on January 18, 2019, which makes it 1086 days between nectar drinks. 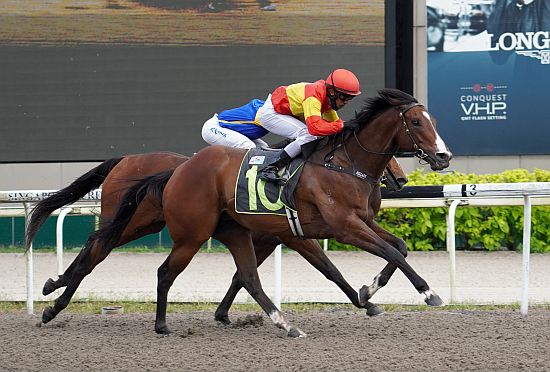 Flak Jacket hasn’t quenched his thirst even longer – 1177 days when he brought up the last of his previous five wins on October 19, 2018.

The former Geoff Grimish-owned (Australian owner who raced the likes of Group 3 winner One Rar with Baertschiger) son of Dane Shadow (deceased stallion with only Flak Jacket left as progeny at Kranji) has been part of the Baertschiger furniture for so long (he joined Shane in 2014 at his second year since taking over his father Don) that he has even named one of his ownership outfits after the Duracell galloper.

Newcomer Attila, Baertschiger’s inaugural 2022 winner, races under the Flak Jacket banner, and one week later, in a strange twist, it’s the eponym himself who obliges!

But even though Flak Jacket is four years Be Bee’s senior and closer to CPF (Central Provident Fund, or pensions) collection, if there is one between the two senior citizens Baertschiger was about to let go, ironically, it’s the younger one - ‘has-been’ Be Bee.

The son of Showcasing was already booked for the Malaysian border crossing, but Saturday’s timely win in the $70,000 Class 3 race over 1100m has got him off the float at the eleventh hour.

“Be Bee bled from both nostrils four starts ago. He came back and didn’t do much at his first two runs, but he ran fifth at his last start, he could have finished second if he didn’t get held up,” said the Australian handler.

“I had actually already booked him for Malaysia, but after today’s win, I just told Jerry (Sung of Auric Stable) he’s too good to send to Malaysia.

“I told him if he bleeds again, not to worry, we won’t put him down and we’ll find a nice home for him. Let’s hope he pulls up fine as he was really jog-trotting coming to the home turn today, it was the old Be Bee again!”

Ironchamp (Simon Kok Wei Hoong) was on the cusp of doing it at both ends, but Siam Warrior (Manoel Nunes) came denying him with a storming run at the 300m, before being himself outsprinted by the fast-closing Be Bee.

Under Matthew Kellady, who was seen cuddling the old boy to the line in perfect timing, Be Bee ($23) rolled back the years as he dashed past Siam Warrior for a half-length win. Ironchamp hung on gamely for third place another 2 ¼ lengths away. The winning time was 1min 4.63secs for the Polytrack 1100m.

Leading in one of his most loyal soldiers after so long must have felt like déjà vu to Baertschiger, who one race earlier, in the $30,000 Class 5 Division 1 race over 1000m, saw Flak Jacket ($28) under another one of those uncanny rides only Mohd Zaki knows how to pull off, stave favourite Wawasan - and Nunes again – off.

A half-length was again the winning margin with Golden Dash (Krisna Thangamani) third another three-quarter length away. The winning time was 59.55 seconds for the Polytrack 1000m.

“Flak Jacket has actually been knocking on the door, he’s run three seconds in a row, and he won today. There is actually a big difference between Class 4 and Class 5,” said Baertschiger.

“A big shout-out to Zaki who works this horse every day, just like Matty is the one who works with Be Bee all the time. I’m pretty sure Zaki and Matty are about the only senior jockeys who stayed back during the whole break, they never went away and kept working hard.

“Those two wins are theirs.”

Flak Jacket was clocking in his 81st start which brings his record to six wins, 17 seconds and eight thirds for prizemoney that has now tipped over the $600,000 mark. Interestingly, Be Bee has carved out a shorter career on 37 starts only, but passed the line first marginally more often with seven wins, and also picked up three seconds and five thirds for stakes earnings that have now ballooned past the $760,000 mark for the Auric Stable.