The trainer, Tim Fitzsimmons, was confident.

The connections doubly so and Golden Monkey duly delivered in the $110,000 Group 3 Singapore Three-Year-Old Sprint (1200m) at Kranji on Saturday.

With Silent Is Gold (Ronnie Stewart) sent out as the prohibitive $11 favourite – and rightly so after beating Golden Monkey comfortably at their recent outing – it was up to jockey Oscar Chavez to back up the bullish claims and turn the tables on that close to three length-defeat just under one month ago. 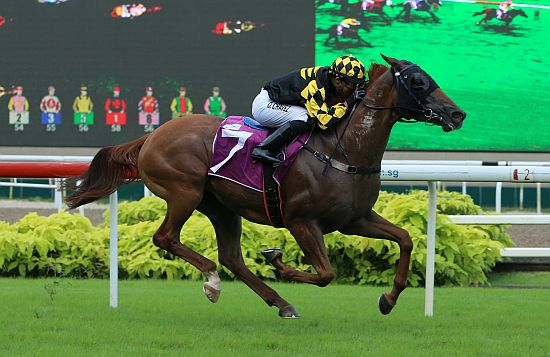 But Chavez was in his element in the true-run race – stablemate Gold Ten Sixty-One (Jake Bayliss) led them up early at a clip - stalking the favourite throughout.

And even when things got serious with Silent Is Gold taking the lead early in the straight, Golden Monkey ($29) was the only horse to be on when looming large at the 300m.

In fact, connections would have been slapping each other on the back as early as the 200m – if not sooner - as the son of Star Turn careered away with the easiest of wins – three-and-a-quarter lengths – in the exceptional time of 1min 08.87secs over 1200m on the Short Course.

“He was fantastic. It was amazing,” exclaimed the happy trainer after the win.

“He did what we expected him to do.

“He drew (barrier) 14 at his last start and it was tough running round that first turn and while he put in a really good run on the winner, he peaked.

“But he came on in leaps and bounds. He’s a really exciting horse and ran an amazing time.”

Fitzsimmons was also very happy to have plenty of owners watch the Australian-bred gelding knock in his first Group win.

“Just great. A lot of guys up from Australia own him and for them all to be here, it’s massive,” said the leading trainer.

“These guys have not been able to come for a couple of years and to have a smart horse - a reason to come up here – it’s exciting times.” 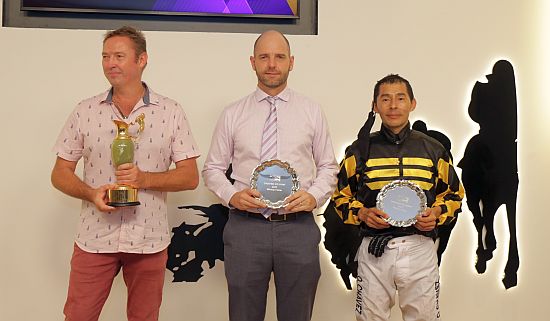 The race was not without dramas - with second-favourite Alqantur dislodging jockey Manoel Nunes in the straight - but it was all about the winning connections post race.

“How exciting was that?” exclaimed Josh McLoughlan of Jig Bloodstock, who purchased the horse and put together the syndicate.

“Very exciting for all the owners.

“We probably only have three or four (owners) here but 25 or so are in him  - mostly mates from back home including guys like (ex and current Australian Rules football players) Dane Swan, Dusty Martin and Michael Gardner.

“The phone had been buzzing – most only have a small share but they have been asking to be involved in a good horse for a long time and I’m so glad I got them involved in Golden Monkey.”

The astute bloodstock agent – who helps the broadcast team at Singapore Turf Club occasionally – bought the horse as a raced maiden from Australia but knew of his potential.

“I bought him off (trainer) Clayton Douglas,” explained McLoughlan.

“He was a five-start maiden but had been running well behind some nice horses, so I knew he would be up to the task in Singapore.

“But the important thing was that he was very sound - we tested them thoroughly before buying - and that combination (form and soundness) was enough to get me and my mates very interested.”

Given his dominant win, Golden Monkey will be the hardest to beat in the Group 2 Singapore Three-Year-Old Classic (over 1400m on July 9) but McLoughlan is looking even further afield for the new stable star.

“Yes, the 1400m of the Classic looks ideal and that’s obviously his next assignment but the (Singapore Group 1) Lion City Cup (1200m) in August is also on our radar now,” said McLoughlan.

“Timmy has done a great job with him and Oscar – he’s the best horseman in Singapore in my opinion – does all the track work with him, so we can’t thank them enough and that race (Lion City Cup) fresh would be ideal.”

Chavez – who has ridden Golden Monkey at all his four races and all bar one at his five barrier trials in Singapore – agreed with McLoughlan that he would improve over further.

“He did it so easy today so he will be even better over 1400m or even the mile,” said the man they called the ‘Panamanian Prince’.

“You know what I said before, after this horse had his first three runs – he got kicked at his first run badly and had bad barriers at his next two – that if he draws a good gate today, he wins.

“The moment he jumped, I saw that the other horse (Silent Is Gold) wasn’t going away from him and when I saw Ronnie step on the gas at the top of the straight, I knew I had him covered.

“I really didn’t have to take off but it’s a Group race so I had to make sure I wasn’t cocky, but I could have let him cruise. It was that easy.”

It did not seem like there were too many hard-luck stories from the race – apart from the fall of Alqantur – although Silent Is Gold would have lost few admirers given he had all other runners covered with Gold Ten Sixty-One gallantly holding on to third, five-and-half-lengths away from his winning stablemate.

Golden Monkey has now taken his handy record to two wins and two placings from four starts for total stakes earnings over $80,000 for the Golden Monkey Stable, on top of the A$23,400 he earned from three placings in five starts in Australia.