Racing at Meydan on Thursday is highlighted by a pair of 3-year-old races, including the 1600m UAE 2000 Guineas Trial sponsored by Hamdan bin Mohammed Cruise Terminal, for which 11 have been declared, three for Godolphin seemingly headed by the Charlie Appleby-trained Rebel’s Romance.

The mount of William Buick, Appleby’s charge, a homebred Dubawi gelding, is undefeated after two starts as a juvenile, both on all-weather surfaces, in late October and the middle of November.

Appleby said: “As a gelding Dubai is ideal for him because he can aim at the Classics here. He has done nothing wrong so far and is pleasing us at home. He should run well.”

Fellow Godolphin handler Saeed bin Suroor saddled Soft Whisper and Pat Cosgrave to win the 1400m UAE 1000 Guineas Trial last week, but his two runners in this, Line Of Attack and Rich Waters, to be ridden by Hector Crouch and Harry Bentley respectively, would both appear to need to improve significantly on their British form. The former is a once raced maiden, the latter won once from three starts.

For his main patron, Sheikh Ahmed bin Rashid Al Maktoum, Nicholas Bachalard relies on Mouheeb, impressive winner of his sole start to date in a 1200m Jebel Ali maiden a month ago when ridden by Tom Marquand. Stable jockey Ryan Curatolo, suspended on that occasion, is back in the saddle and the colt by Flatter is seemingly held in high regard.

Bachalard said: “We have some nice young horses, and he is definitely among the better ones. We decided to keep him at Jebel Ali first time even though the 1200m would be his absolute minimum trip, so we were very pleased with the way he won.

“Obviously, this is a better race under different conditions, but the 1600m should be ideal at this stage of his career.”

Similarly unbeaten, albeit after two starts, Zhou Storm is one of two in the race, alongside Grand Dubai, for Ali Rashid Al Rayhi who celebrated a Meydan treble last Thursday. Stable jockey Connor Beasley enjoyed a double on that Meydan card and, unsurprisingly, sticks with Zhou Storm.

Beasley said: “He had to work hard the first day over 1200m, but was then very impressive, under a penalty, over 1400m. He has had a nice six week break and the extra 200m should suit, but we do have a wide draw to overcome this time.”

That race is on dirt whereas the following 1200m Dubai Trophy sponsored by DP World UAE region, also for 3-year-olds, is on turf and has attracted a field of ten. A conditions race inaugurated as recently as 2019, Godolphin have won both editions to date with Appleby and Bin Suroor celebrating a winner apiece.

Only the latter is represented this year with Pat Cosgrave taking the mount aboard First Smile, a Dark Angel colt who made it third time lucky when landing a 1200m 2-year-old novice stakes at Lingfield in the middle of October having finished runner-up on his first two starts, the first of which was at the beginning of September.

This fourth career start will actually be his turf debut and Bin Suroor said: “He has improved with each won and won easily last time. He has plenty of speed, so 1200m is ideal and the switch to turf should not be a problem.

“He will improve for the outing but is working well and should run a big race.”

Fawzi Nass introduces First Prophet to the local scene after the New Boy colt scored once in five starts in Britain for Charlie Fellowes. That was on debut, over 1400m at Newbury, so his absence since the end of August is not a great concern.

He is the mount of Adrie de Vries who said: “Our horses have been running well on the whole and he seems a nice new, young, recruit. He seems as though 1200m will suit him, especially first time back, so hopefully, he is going to be thereabouts.”

For Sheikh Ahmed, Bachalard and Curatolo, Tahdeed will be making his turf debut after two dirt outings as a juvenile at Jebel Ali. Third of five runners over 1000m on debut, he was then well beaten over 1200m in the race won by stable companion Mouheeb.

Bachalard said: “He has run ok both times and this looks the ideal chance to try him on turf which, we hope, he will enjoy.” 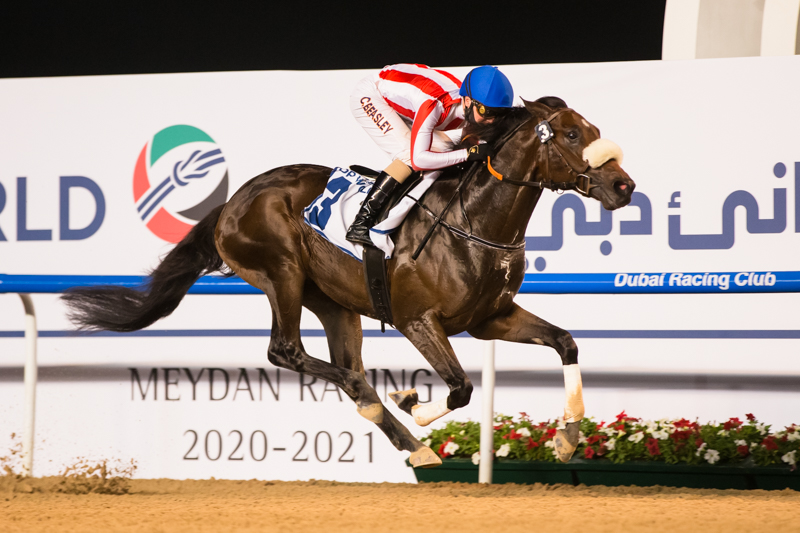