The three-year-old fillies take centre stage at Randwick on Saturday in the $200,000, Group 2 TAB Light Fingers Stakes (1200m) with most commencing their upcoming autumn campaigns including Group performers Libertini, Kaimichi and Flit franking the quality of the race.

While the latter two Godolphin runners are Group 1 winners, it is the duel Group 2 winner and Group 1 placed Libertini who heads TAB’s market as the $2.40 favourite followed by Kiamichi at $4.80 and Flit at $5.50.

Randwick’s track must be a player in calculations for any of the ten race programme on Saturday, with the Sydney monsoon season dropping 367.2mm of rain on it over the past seven days. Not surprisingly it is rated a Heavy 8 on Friday. With a dry day on Friday and hopefully no further rain until late Saturday racing will be on a Soft 7 at least.

Which brings up Libertini’s record of no wins from three starts on a Soft track, however a second and a third are there.

Both were on Soft 7 tracks in the spring with the first in the Group 2 Tea Rose Stakes over 1400m at Randwick when both the distance and the track found the I Am Invincible filly out. The second was in the Group 1 Coolmore Stud Stakes over 1200m at Flemington where was beaten by the two best colts in the land, Exceedance and Bivouac, so that was most honourable Group 1 third.

The Sidestep filly Kiamichi was the winner of the holy grail of the Group 1 Golden Slipper over 1200m at Rosehill last March on a Heavy 8. She has also not won again in line with many a Slipper winner. That said Kiamichi won a trial over 900m at Rosehill on January 28th in impressive fashion with a winning margin of 2 3/4L.

“She laid it all on the line last autumn and her preliminaries have been very strong,” said trainer James Cummings earlier in the week.

“Both her trials have been encouraging, she won the latest one in good style and she gets the going she prefers.” 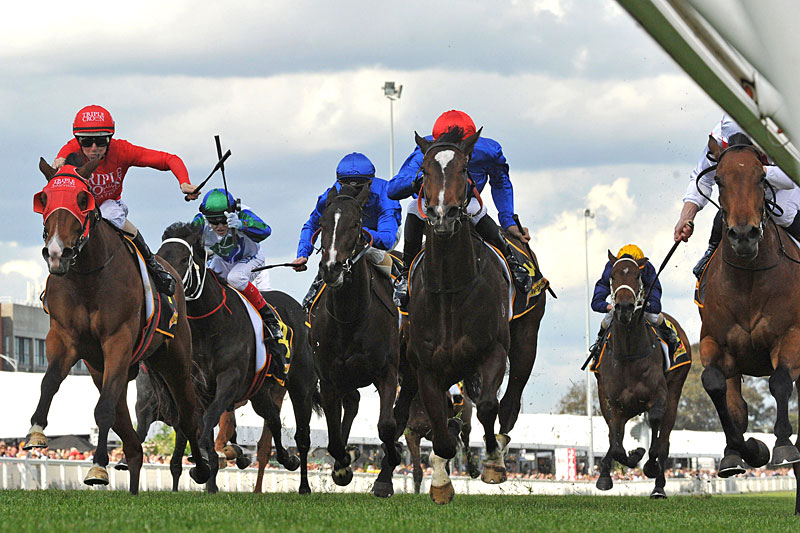 Which leaves Flit, the winner of the Group 1 Thousand Guineas over 1600m at Caulfield last October. The Medaglia d’Oro filly has started twice on Soft tracks for a second place, but an important and narrow second as it was to Anaheed in the Group 2 Percy Sykes Stakes over 1200m at Randwick in April.

The Snowden trained Fastnet Rock filly Anaheed resumed for her latest campaign when winning the Group 2 Rubiton Stakes over 1100m at Caulfield on February 8th with a strong 1 1/4L winning margin. The duel Group 2 winner and Group 1 placed filly looks to have come through her summer break very well.

This might also apply to Flit if the comments by Cummings are any indication.

“She might just be a tougher filly this time around,” he said.

“She will certainly be better for this first-up run, but at the same time I would not be surprised if she could win.

“Needless to say, she is going to get better when she gets up to the mile,” he said.

With Saturday’s track in its heavy to soft condition the ability and strength to run 1200m plus will be a major factor. Flit will be right in this if the track blunts Libertini’s sprint and the question mark on Kiamichi’s return remains. Her market position is attractive on this basis.

Libertini starts from barrier 11 for Tommy Berry while inside Flit and Hugh Bowman have barrier one and Kiamichi and Rachel King barrier two.